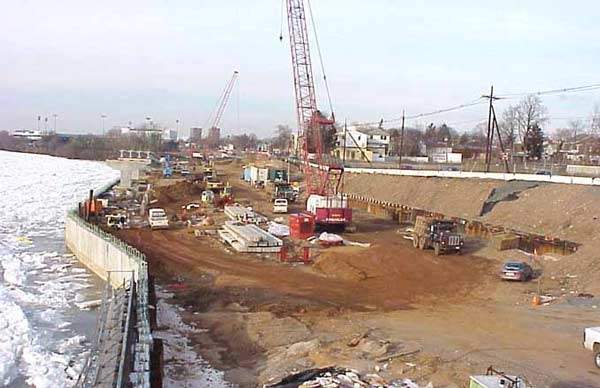 Looking north, completion of the remedial excavation and backfill at the foot of Lalor Street (December 2000). 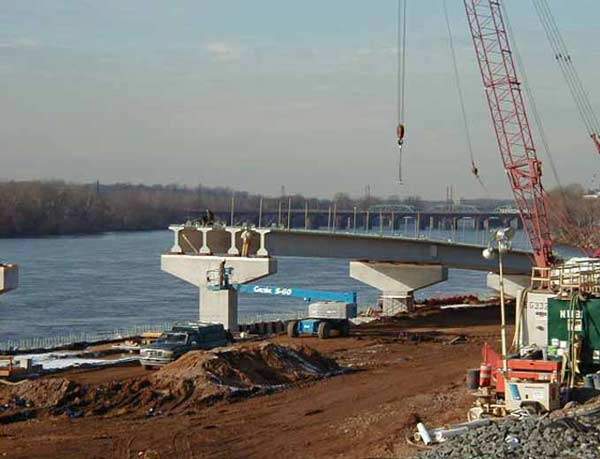 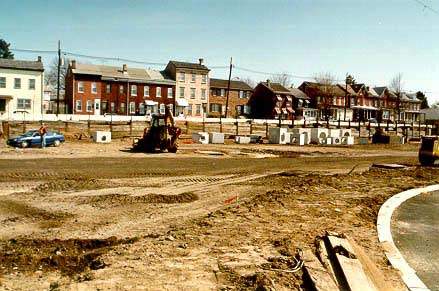 Looking northwest, placement of the AASHTO precast girders for the Ramp D bridge which will connect with Lalor Street. 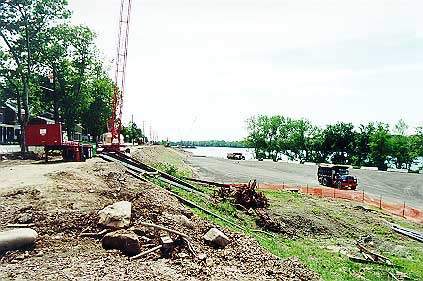 In September 1998, the NJDOT began construction of the NJ 29 ‘missing link’ between NJ 129 and the Amtrak Bridge in downtown Trenton, New Jersey, USA. The $94 million project involved a tunnel along the Delaware River banks and was completed in March 2002. The 1.4 mile extension connects the two ends of the New Jersey Route 29 interstate freeway.

The Route 29 Project was designed to alleviate traffic congestion throughout the City of Trenton. Until the expansion project, commuters going into the city on Route 29 used a local residential street. The improvements to Route 29, the final section of the Trenton Complex that was started in the 1960s, eliminated a bottleneck created by the gap and connected the interstate loop around the city.

The New Jersey Department of Transport (NJDOT) formed a Construction Partnering Team, with representatives from community groups, local businesses, environmental organisations, emergency personnel and government agencies, to represent the varied interests of all those impacted by the Route 29 Project. The aim of this team was to keep all the effected parties informed of the latest news regarding the project, as well as deal with environmental and community issues as they arose.

In the 1960s project proposal, the NJDOT proposed the existing NJ 29 be extended by 3.2 miles. Until 1998, only 1.8 miles of this project was completed, with a gap of 1.4 miles between the two ends of the freeway. Motorists between the two sections used Lamberton Road, a two-lane residential street that was not officially designated as NJ 29.

Construction began in September 1998 and took approximately threeand-a-half years to complete. Originally planned for completion by Spring 2001, the project was delayed due to environmental issues regarding the silt box on the banks of the river situated adjacent to the newly constructed tunnel on the freeway. There were also problems with debris from the construction being found to contaminate the river.

The NJ 29 project included construction of four 12ft-wide lanes (two lanes in each direction), 12ft wide shoulders and a concrete (‘Jersey’) barrier to separate opposing traffic flows. The NJ Route 29 project was included as part of the 1998 ‘TEA-21’ Federal transportation bill. The new section of the freeway is between the Amtrak Bridge and Route 129 in South Trenton. The contractor’s bid for the project was $71 million. The State of New Jersey and the Federal Highway Administration are funding the Route 29 Project.

The roadway divides near the waterfront park with a variable width median from the park to the Amtrak bridge. A portion of the new roadway is depressed. A majority of this depressed portion is a cut-and-cover tunnel section. In addition to walkways and bicycle paths, the park on top of the tunnel features an historic / interpretative area that highlights the history of the South Trenton Waterfront. The new four-lane highway also has an attractive boulevard in the centre.