The New Sunderland Bridge would be the tallest in the UK.

The landmark bridge will connect Pallion and Castletown. 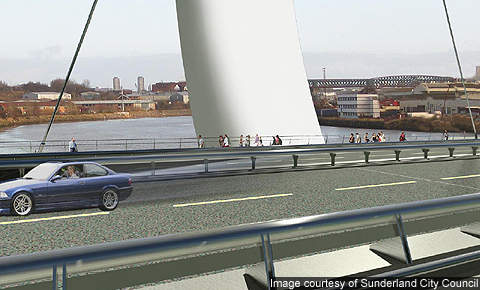 Sunderland Strategic Transport Corridor (SSTC) bridge project will connect A19 with the Port of Sunderland. 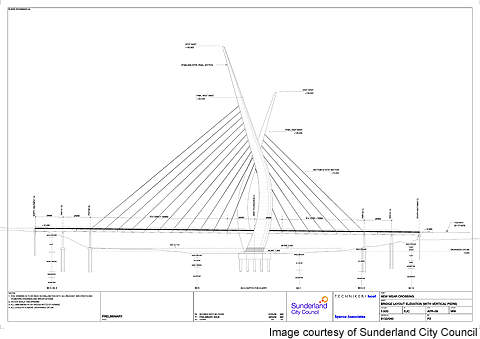 Diagram showing the technical aspects of the New Sunderland Bridge. 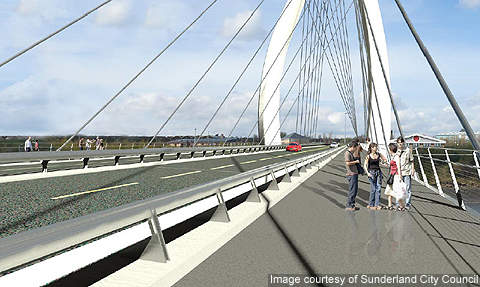 The New Sunderland Bridge would have two traffic lanes in each direction and dedicated cycle and pedestrian ways.

The New Sunderland Bridge or the New Wear Bridge will be the tallest of its kind in the UK, spanning over the River Wear in Sunderland city. The landmark bridge will connect Pallion in the South and Castletown in the north. The project received planning permission from the Sunderland City Council in April 2010. It will serve the vehicular, cyclist and pedestrian traffic as an important gateway to the city centre and a symbol of Sunderland.

The bridge is being built as part of the Sunderland Strategic Transport Corridor (SSTC) project which aims to provide a new link from the A19 to the Port of Sunderland. The SSTC is a partnership programme planned by the Sunderland City Council and Sunderland arc (Area Regeneration Company).

The SSTC programme involves construction of the Sunderland Bridge for the development of Sunderland and the North East, and allied highway connections to connect the existing road network. Besides improving access from the port to the A19 Hylton Bridge, the programme will also help in urban regeneration of the riverside area. The scheme will ease traffic congestions on the existing city bridges, create job opportunities and support regeneration of sites including the Farringdon Row, Vaux and Groves and the city centre.

Construction work on the project was expected to begin towards the end of 2012 following completion of the tendering process, but was delayed due to proposed design changes in order to reduce the project cost.

The Sunderland Bridge was designed by the Stephen Spence architects and structural engineers Techniker in 2005. The New Sunderland Bridge would have been a 336m long unique cable-stay bridge with a deck width of 30m. It would have four lanes with two in each direction alongside dedicated cycle and pedestrian ways.

The design won the first prize in RIBA for the New River Wear Crossing Competition among 35 participants in September 2005. It was held by the Sunderland City Council, Sunderland arc and English Partnerships. The residents of Sunderland supported the iconic bridge design against the cheaper option of a basic beam bridge road in a City Council’s consultation.

Plans to construct the bridge were started in 2003 by Sunderland arc in its Investment Strategy to provide a new gateway to the city. The funding, however, posed an obstacle for the project implementation. In November 2008, the Cabinet backed the iconic Wear bridge despite concerns over the cost. In December 2009, a planning application was placed with the Sunderland City Council, which granted permission in April 2010.

"The design won the first prize in RIBA for the New River Wear Crossing Competition among 35 participants in September 2005."

The total road length including bridge span would be 3.2km. Ownership of lands has been secured. The proposal includes six highway linkages to the bridge and development of about 41 acres of the site. The project also included landscaping and engineering works, and improvements to A19 Interchange and Wessington Way.

It would be a new route into the central city by connecting European Way in Pallion on the south with Wessington Way, Castletown on the north side of the river. The new bridge would provide a direct connection to the City Centre from the A19 and A1231 routes. The council chose the route following a public consultation in 2005. The project was expected to create 11,000 new jobs and many other economic benefits.

Technicker along with architect Stephen Spence and sub-consultant Roughan O’ Donovan have already completed the final design of the project. Corderoy is working as cost consultant. The highway design will be provided by Jacobs.

In July 2008, the UK Government, through the Department for Transport (DfT), committed to funding £82.6m towards the bridge, approach roads and associated infrastructure. The Sunderland City Council will contribute £31.9m and the One North East will fund the remaining £3.5m.

The City Council submitted a £85.2m funding bid to the government which was backed by the Department of Transport in December 2011. The bid was submitted following an announcement by the government to allocate £630m for local projects that boosts the economy and generates employment.