Øresund Channel, between Sweden and Denmark

Øresund bridge and other works

The &#216;resund Bridge permanent fixed link runs from Copenhagen in Denmark to Malm&#246; in Sweden. 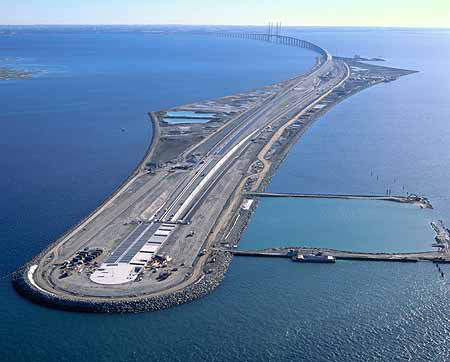 The artificial island of Peberholm was built in order to transfer the traffic from the immersed tunnel up onto the approach bridge. 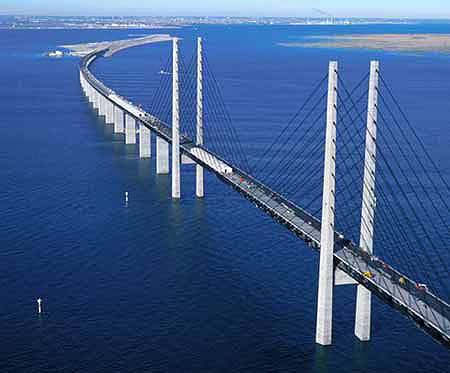 The high bridge has the longest cable-stayed main span in the world for both road and rail traffic. 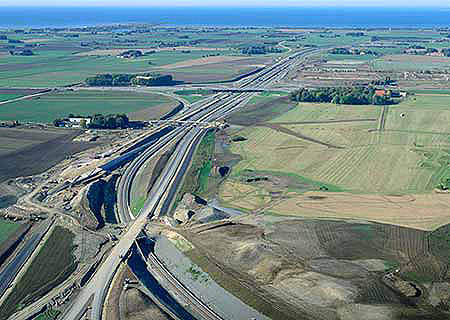 The &#216;resund Line connects to the Continental Line at Lockarp, south of Malm&#246;. 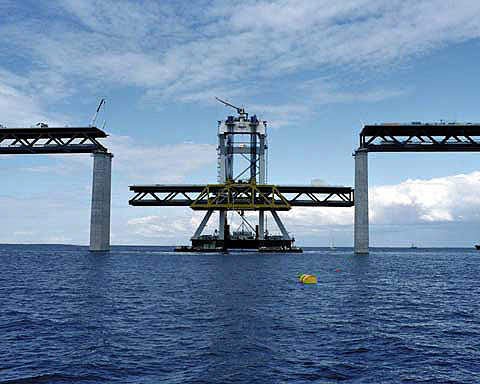 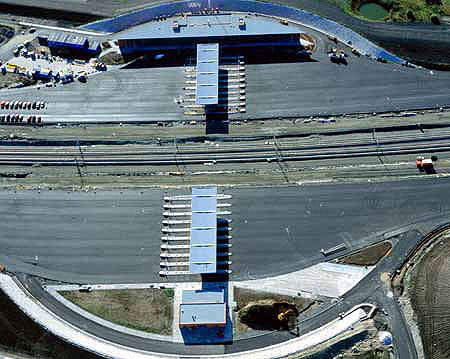 The toll station, situated at the Swedish side of the link, has eleven lanes in each direction, nine of which are equipped with card automats and/or manned by service personnel.

In 1991, the Danish and Swedish governments signed an agreement to establish a fixed link across the Øresund. The agreement was ratified by the two countries’ parliaments in August of the same year. Øresundskonsortiet, a joint venture between A/S Øresund and Svensk-Danska Broförbindelsen SVEDAB AB, constructed the permanent link between Sweden and Denmark. The project cost more than DKK12 billion and comprises a 16.4km (10-mile) link between Copenhagen and Malmö consisting of a tunnel, a bridge and an artificial island.

In May 2003 the Øresund Bridge won the IABSE Outstanding Structure Award. The judges commended the project for its innovative planning, design and construction management as well as its compliance with the time schedule, budget and tough environmental requirements.

The project originally began in March 1991 when the Danish and Swedish governments signed the agreement. In January 1992, Øresundskonsortiet was formed through a partnership agreement. In September 1993 the first turf was cut, and in June 1994, the Swedish government approved the construction of the link on Swedish territory. From July to November 1995, Øresundskonsortiet signed contracts with all the necessary companies for the construction. By March 1999, the first vehicle was driven through the tunnel, and by December, the first rail track between Malmö and Copenhagen was completed.

The Øresund Bridge is composed of a high bridge over the Flintrännan navigation channel and two approach bridges. The high bridge has the longest cable-stayed main span in the world (490m) for both road and rail traffic.

The bridge two-level superstructure is fabricated from steel and concrete. The steel girder supports the upper deck, which accommodates the motorway, and the lower deck where the railway is located. The tracks are placed in a concrete trough along the approach bridges, which changes to a steel deck on the high bridge.

Hydraulic systems supplier Enerpac supplied CLR Series double-acting jacks to place the bridge elements of the lower deck on their bearings. The jacks have also been used to support the upper deck.

The western part of the Øresund Link is a 4km-long tunnel between the artificial island of Peberholm and the artificial peninsula at Kastrup. The tunnel is the longest immersed tube tunnel for both road and rail traffic in the world. It consists of 20 tunnel elements beneath the Drogden Channel.

The elements, manufactured in Copenhagen’s North Harbor, are 577ft long and weigh up to 55,000t each. Each element consists of eight segments of 72ft each. Enerpac’s CLL lock nut jacks were used to move the inside walls of the tunnel mould and lift these segments for transportation from the Copenhagen factory to the construction site.

The artificial peninsula at Kastrup, which accommodates the portal of the Øresund tunnel, was constructed by Øresund Marine Joint Venture (ØMJV). It covers 0.9km² and is made up of dredged material from the Øresund seabed.

Øresundskonsortiet signed a contract with Øresund Tunnel Contractors for the construction of the immersed tunnel with two lanes in each direction, a double-track railway and a service tunnel. The tunnel contractors were a consortium consisting of NCC AB (SE), Dumez-GTM SA (F), John Laing Ltd (UK), E. Pihl & Søn (DK), and Boskalis Westminster (NL).

A contract was also made for the dredging and construction of the artificial island with Öresund Marine Joint Venture, consisting of Per Aarsleff A/S (DK), Ballast Nedam Dredging b.v. (NL) and Great Lakes Dredge & Dock Co (US).

Øresundskonsortiet also signed a contract with Sundlink Contractors, Skanska AB (SE), Højgaard & Schultz (DK), Monberg & Thorsen (DK), Hochtief AG (Germany), for the high bridge and the two, two-level approach bridges with the motorway on the upper level and the railway on the lower level.