The European Union/Government of Greece 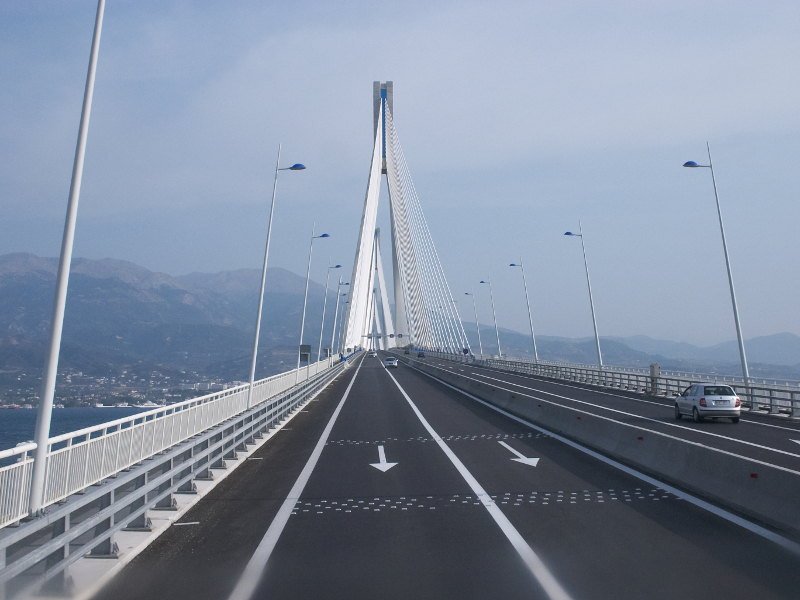 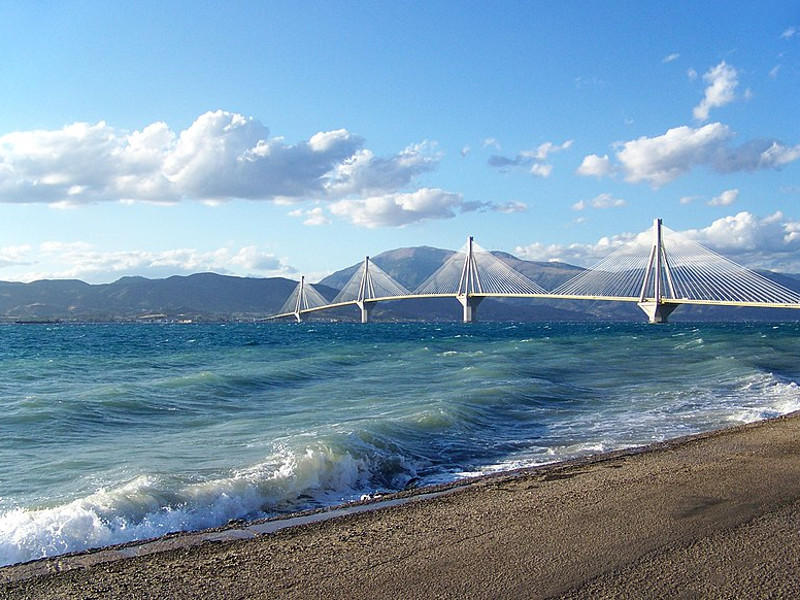 The bridge is managed by Gefyra Litourgia. Image courtesy of Eusebius. 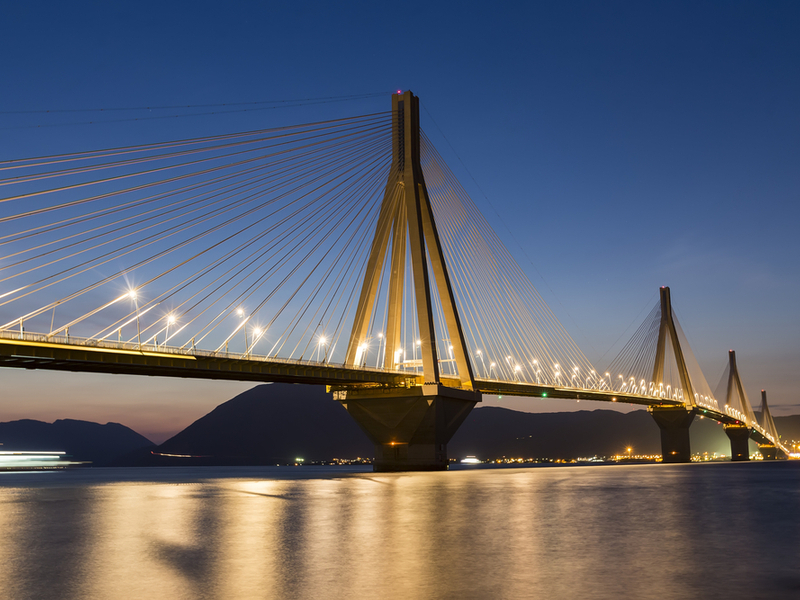 The cable-stayed bridge was opened to traffic in 2004.

The Rion-Antirion Bridge in Greece, which was first opened to traffic in August 2004, was the product of a construction project from 1997 to 2004 and resulted in the one of the world’s longest cable-stayed bridges.

The bridge also unites two major roads: the intersection of the Patras–Athens–Thessaloniki motorway (which forms part of the European motorway) and the western axis of the Kalamata–Patras–Igoumenitsa road.

The five-spanned bridge was completed in May 2004 and its opening significantly reduced the crossing time of the Gulf of Corinth to around five minutes from 45 minutes (by ferry). Currently 10,000 vehicles cross the bridge per day.

The Rion-Antirion Bridge’s pylons are made from reinforced concrete and pylon legs range from 25m to 45m above sea level. The pylon heads reach a total of 160m above sea level. Because of the high seismic activity in the area, the Rion-Antirion Bridge required seabed reinforcement via 200 hollow steel pipes (for each pier) driven into the seabed and topped with gravel.

A 27.2m-wide deck contains two traffic lanes plus a safety lane and pedestrian walkway in both the directions. The structure of the deck is composite with a steel frame of two longitudinal 2.2m-high plate girders with transverse plate girders.

In addition, there are two approach viaducts, one 392m-long on the Rion side and the other 239m on the Antirion side.

The project is under the control of the Hellenic Ministry of Environment, Physical Planning and Public Works (MEPPPW). The lead contractor and operator / concessionaire was Gefyra , a consortium formed by French-based VINCI and Greek companies J&P Hella, Elliniki Technodomiki, Volos Technical Company, Athena, Proodeftiki and CI Sarantopoulos. Gefyra is responsible for operating the bridge and providing maintenance services during the course of the 42-year concession period. The current shareholders of the consortium include VINCI Concessions (57.45%), Aktor Concessions (22.02%), and Avax (20.53%).

“The bridge unites two major roads: the intersection of the Patras–Athens–Thessaloniki motorway (which forms part of the European motorway) and the western axis of the Kalamata–Patras–Igoumenitsa road.”

Gefyra Litourgia was contracted by Gefyra to operate the bridge and provide toll and traffic management, as well as maintenance.

Design and construction engineering of the bridge was the remit of Ingerop and Vinci Construction Grands Projets. Dynamic analysis was carried out by Centre Scientifique et Technique du Bâtiment.

Structural engineering was carried out by DOMI Partnership and Geodynamic and Structures. Buckland & Taylor Ltd was the independent design checking engineers and FaberMaunsell Ltd and Structural and Civil Consultants Ltd were the Supervision Engineers.

Kinopraxia Gefyra was the constructor of the bridge. Cimolai Costruzioni Metalliche, Cleveland Bridge & Engineering Co Ltd and Pantechniki S.A. were responsible for the steel construction of the deck and approaches to the bridge. Böhler Schweißtechnik Austria GmbH, COMELY (safety barriers) and Dynaopt Géodésie Industrielle were steel construction subcontractors.

Freyssinet International constructed and installed the stay cables. ALCAN was responsible for the formwork of the piers. Formule Informatique was the provider of the software for the calculation of cable geometry.

Caissons, which form the bases of the piers and in turn hold the bridge’s pylons, were constructed in a purpose-built dry dock, moved to a wetdock where the concrete was added and then towed out to the installation area and lowered using tug winches.

Seabed reinforcement (in depths of up to 65m) was achieved by using inclusions, which are 2m diameter hollow steel pipes 25m to 30m long. 200 pipes were driven in to the seabed by a crane on a tension leg platform, which was installed at every pier location. This was topped with a 3m-thick, levelled gravel layer. A cone with a diameter of 38m formed the lower part of the pier.

The pier head itself measures 90m in diameter and is believed to be the largest base foundation ever constructed for a bridge. The upper pier shaft with its reverse pyramid shape is 15 m high and has a 38m-long square base.

Once the pier was completed, the bridge’s four pylons were constructed. Each pylon took a year to fully erect. Construction began with the pylon legs (there are four legs to each pylon) which were made from reinforced concrete and embedded in a pylon head.

Pylon legs ranged from 25m to 45m above sea level, leaving a shipping clearance below the deck of 52m in the middle of the strait. These pylons rise by 115m to a maximum height of 160m above sea level.

The pylon heads were part-constructed and assembled at the installation site by sheerleg cranes. Two individual pylon modules, each weighing 150t, were then lifted and installed.

Attached to the pylons were the stay cables. These were placed in an inclined arrangement, with their lower anchorage on the sides of the deck and the upper anchorage in the 35m-high pylon head. The cables were made of parallel, galvanised strands with the thickest cable formed from 70mm x 15mm strands.

Due to the strong seismic activity in the area the Rion-Antirion Bridge needed to be able to withstand an earthquake comparable to the Izmit earthquake which measured 7.4 on the Richter Scale (the South Rion coast drifts several millimetres away from the North Antirion coast every year).

A suspended deck acting as a pendulum during an earthquake was the best way to counter such natural forces. In addition, the bridge can sustain the impact of an 180,000t tanker sailing at 18kt as well as winds of up to 250km/h.

With a width of 27.2m the deck features two traffic lanes plus a safety lane and a pedestrian walkway in both directions. The structure of the bridge’s deck is composite with a steel frame made of two longitudinal 2.2m-high plate girders on each side as well as transverse plate girders spaced every 4m. The top slab is made of pre-cast concrete panels.

Four damping devices connect the deck to the top of each pier and limit the pendulum movement of the deck during an earthquake. On either side a monumental transition pier links together the deck of the cable-stayed bridge with the deck of the approach viaducts.

The five-span suspended deck was constructed using a cantilever technique. The deck consists of 12m sections, each weighing around 330t. These sections were transported to a quay in the Antirion and prepared for installation by Smit Transport and Heavy Lift’s sheerlegs Taklift 7.