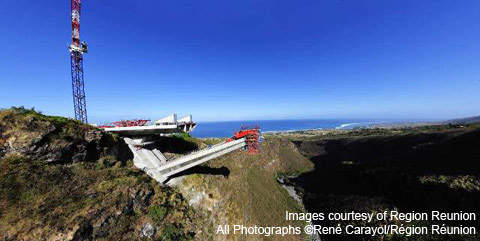 Construction work at the Grande Ravine. 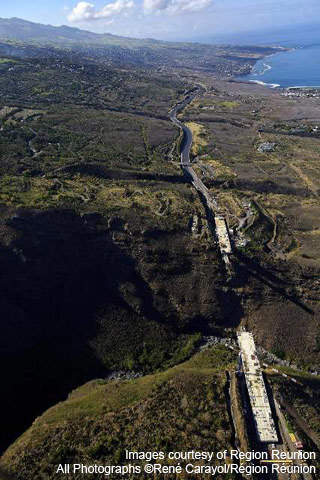 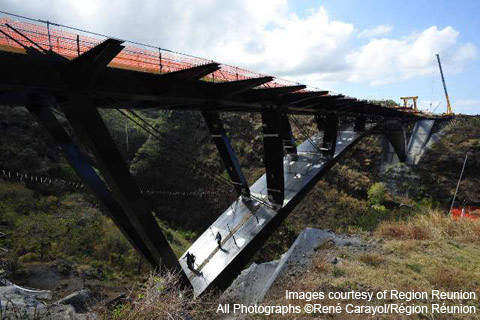 Construction of the viaduct over the Fontaine Ravine. 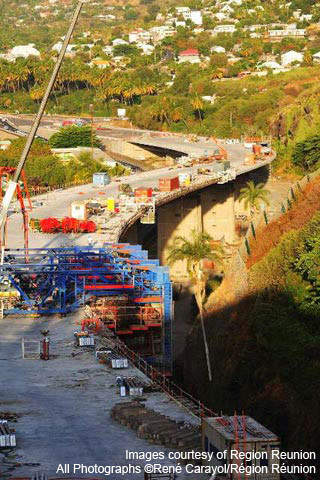 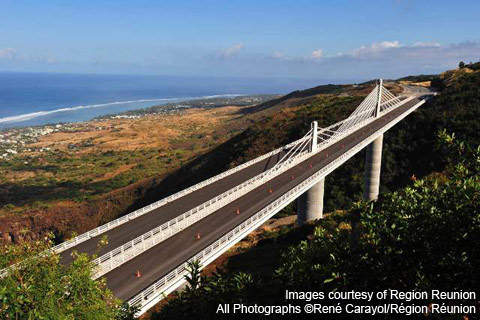 The Viaduct of the Three Basins.

Réunion is an island situated around 200km (130 miles) south west of Mauritius in the Indian Ocean. The island is a French protectorate and is regarded as an overseas department of France for administrative purposes (one of the 26 regions of France, with the same rights). The island is the most outer region of the European Union and was the first place where the euro became legal tender.

The island’s Route des Tamarins was a major road project that started in 2003. The road links the administrative centres of the island at Saint Paul and Etang-Salé via Saint-Denis in the north and Saint-Pierre in the south. The investment cost of the road has gone up from €700m at the start of the project to over €1bn. The European Investment Bank lent €200m to the project.

“The road crosses a high-altitude region with terrain marked by ravines, gorges and cliffs.”

The road crosses a high-altitude region with terrain marked by ravines, gorges and cliffs. This means traversing 120 gullies and the construction of 48 civil engineering structures, four of which are large viaducts. There are nine interchanges, three tunnels and 23 bridges (interchanges are at St Paul, Plateau Caillou, the Eperon, the Hermitage, the Dam, the Colimaçons, Stella, Portal, and l’Etang-Salé). The project was completed in June 2009. By 2015, between 40,000 and 69,000 vehicles are expected to use the road per day.

The Route des Tamarins has been built to relieve overstretched infrastructure in built-up areas, provide better operating conditions for the public transport system and improve access to the west of the island. It also helps to open up the countryside along the route for tourists. The project is an important part of the island’s long-term development programme and has been absorbed into the region’s multi-annual investment programme.

There are four large viaducts / bridges along the route: St Paul viaduct, Viaduct of the Three Basins, Viaduct Grande Ravine and Viaduct the Ravine Fontaine.

Viaduct of the Three Basins

The Viaduct of the Three Basins has been constructed at Trois-Bassins, which is in the west of the island. The structure was built between 2005 and 2009 and is 374m long and 22m wide, with an estimated cost of €30m. Clients for the project included Conseil Régional de la Réunion, Ministére de l’Equipement, des Transports, du Logement, du Tourisme et de la Mer. Contractors for this project included ARCADIS, Coteba, Strates / Berlottier Architectes and Thales Engineering & Consulting (main contractors and designers). Other contractors for engineering and construction included SECOA, Eiffage TP, Matiére, Groupe Razel, SAMT (steel work), Mageba SA (equipment provider).

The overpass of the Grand Ravine is a viaduct constructed near Trois-Bassins. The structure is 288m long and 20m wide and spans the valley at a height of 170m. Work began in 2006 and was completed in 2009. The steel deck weighing 3,560t was constructed by Eiffel and consists of 24 box sections to form a multi-cellular orthotropic deck, which is 4m high and 20m wide.

The viaduct over the ravine Fontaine is an arched bridge consisting of a metal arc with a span of 170m and a 200m-long steel-concrete composite deck. Contractors for this section included Greish, Tremblet, Coyne & Aries, Zirk and Deleuze.

The road between St Paul and Etang Salé was constructed in two major sections and required a number of contractors. The project St Paul to RD10 section was managed / constructed by DDE and the dual lane section of RD10 at Salt Lake (La Saline-les-Bains) was project managed by Scetauroute.