2010
25ft vertical under clearance from the water and a 75ft marine channel, 12ft median, two 12ft lanes and one 10ft shoulder in each direction. Sidewalks and parapets are included on each side of the bridge resulting in an overall bridge width of 94' 8"

Plan profile of the new bridge showing the structural supports and deck.

Route 70 and the new bridge in Ocean and Monmouth Counties.

A plan of the proposed changes to Route 70 and the bridge. 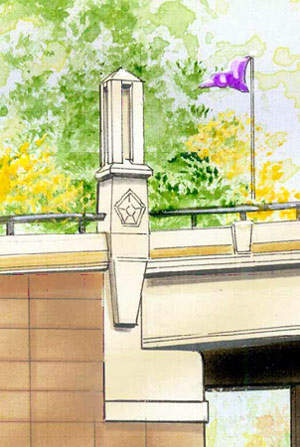 Architectural elements planned for the bridge. 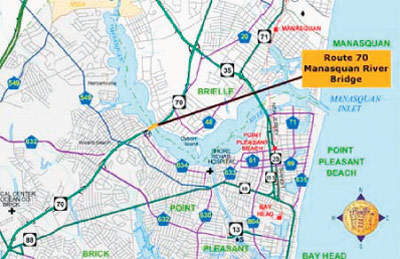 Route 70 as part of the highway system.

A rendering of how the bridge will look when completed in 2010.

The new memorial bridge over the Manasquan River in Brick Township, Ocean County and Borough of Brielle, Monmouth County was started in early 2006. The new precast concrete bridge is scheduled for completion by December 2010, although the project is currently ahead of schedule.

The work is due to be done in stages, some of which require other project works to be carried out. As well as replacing the existing bridge, the work includes widening and reconstructing Route 70 from Herbertsville Road in Brick Township to the intersection with Riverview Drive in Brielle.

“The bridge was designated the ‘September 11 Memorial Bridge’ in remembrance of the 170 people from Monmouth and Ocean counties who died in the terrorist attacks on 11th September 2001.”

The $52m project, which is being overseen by the New Jersey Department of Transportation (NJDOT), is one of the largest ever undertaken in the area. Planning for the bridge replacement project has been ongoing since February 1997, although during the latter stages of planning the name and some of the superficial architecture were changed.

In September 2004, the bridge was designated the ‘September 11 Memorial Bridge’ in remembrance of the 170 people from Monmouth and Ocean counties who died in the terrorist attacks on 11th September 2001. Architectural memorial features include treatments to the piers and parapets, monuments, signage, plantings and a public access platform.

Route 70, including the bridge over the Manasquan River, is a coastal evacuation route. The bridge is a gateway to both Monmouth and Ocean counties and serves vehicular, pedestrian and marine traffic.

The existing movable bridge opens on schedule for marine traffic, which causes delays to vehicular traffic. The current Route 70 roadway was deemed to be inadequate to handle the traffic volume of 32,300 vehicles a day. This bridge project is one component of a comprehensive infrastructure improvement of the Route 70 corridor from Jack Martin Boulevard to the Brielle Circle.

Throughout the development of the project NJDOT has made a continuous effort to involve the local communities of Brick, Point Pleasant, Wall and Brielle. The excellent communication between NJDOT, the residents and public officials has resulted in important revisions and improvements to the project footprint. Some examples are reducing the height of the bridge clearance from 40ft to 25ft, providing ramps at the intersection of Route 70 and River Road/Riviera Drive and constructing a noise protection wall in Brielle.

The project has also addressed the community’s need for a well-balanced, aesthetically pleasing structure that fits into the historical river environment.

The existing bridge was constructed in 1936 and is 625ft long with a single leaf bascule span over the navigation channel. The 17 approach spans are supported on reinforced concrete pile bents. In modern times it was necessary to retrofit the bridge with a sprinkler system to prevent it from becoming stuck in the open position during the summer months due to excessive expansion of components of the mechanism.

The bridge as it stands is now past its best, being structurally deficient and obsolete with only 11ft travel lanes, a 50ft navigation channel and 15ft vertical underclearance.

Alternatives for replacement of the bridge have included 40ft, 27ft and 25ft fixed and movable spans. All of these alternatives considered the function of the local roadway network, alignment of the proposed roadway and constructability in a reasonable time-scale.

A vessel height survey was carried out using state-of-the-art reflectorless survey equipment, interviewing local marina owners and conducting public information sessions with the community stakeholders. Based on these extensive studies, the new bridge height was set to provide a 25ft vertical underclearance for marine traffic and the navigation channel opening was shifted and widened to 75ft.

“This bridge project is one component of a comprehensive infrastructure improvement of the Route 70 corridor.”

A noise wall will be constructed along Route 70 eastbound in the Borough of Brielle to mitigate noise impacts. A public fishing pier will be provided at the north-west corner of the bridge.

New curbs, sidewalks, bicycle-compatible lanes and landscaping treatments will be provided throughout the entire project. Intelligent Transportation System (ITS) improvements will be provided including a weather station, pavement sensors, a bridge mounted CCTV camera and a multi-duct conduit for future expansion of the statewide ITS system.

The project is being constructed in stages to allow for the maintenance of two lanes of traffic in each direction along the Route 70 corridor. The first half of the replacement bridge was completed in Spring 2007. At that time, Route 70 traffic was transferred onto the new structure to allow for the demolition of the existing bridge and construction of the second half of the replacement bridge.

The bridge will have a 12ft median, two 12ft lanes and one 10ft shoulder in each direction. Sidewalks and parapets are included on each side of the bridge resulting in an overall bridge width of 94′ 8″.

The contractor for the bridge construction project is George Harms Construction Company. David Wallis of the NJDOT is the resident engineer.