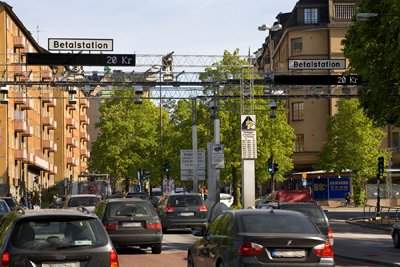 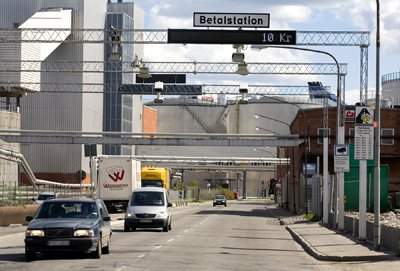 One of the other 18 payment gates for the Stockholm congestion charge area. 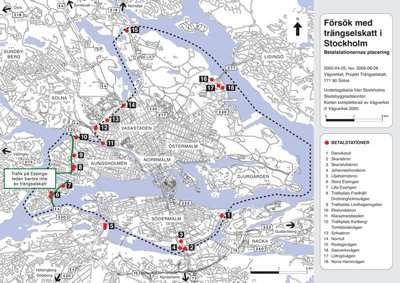 A map of the 18 congestion charge gates around Stockholm. 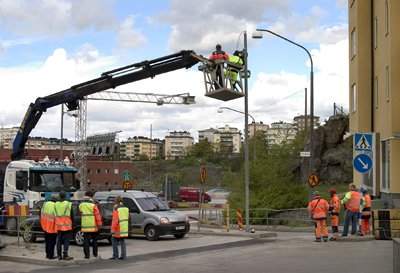 A gate gantry being installed with cameras and transponder technology. 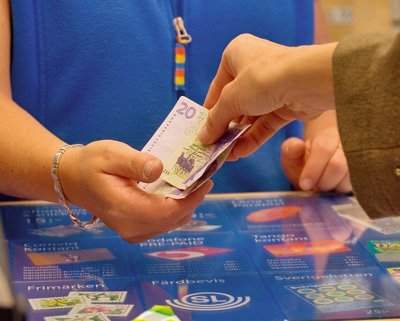 The Stockholm congestion charge may be paid at convenience stores. 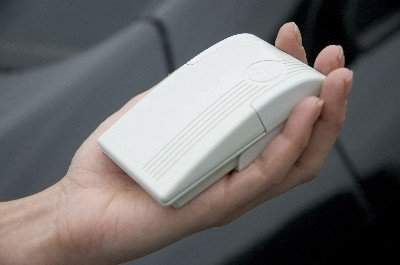 An in-car transponder can provide automatic payments for the congestion charge.

The Stockholm congestion charge is a traffic congestion and environmental tax that has been imposed on the majority of vehicles in Stockholm; it is the second of its kind to be introduced in Europe following the highly controversial but none-the-less successful London Congestion Charge introduced by the London Mayor, Ken Livingstone.

In October 2006, the Swedish government declared that the Stockholm congestion charge was to be introduced permanently during the first half of 2007. The incomes from the reintroduced congestion charges in Stockholm are to be used in partly financing a new bypass road, ‘Förbifart Stockholm’.

IBM built the on-demand solution using wireless RFID technology supplied by Norwegian company Q-Free, one of the leading suppliers of technology for road charging systems. The system works by using a Q-Free on-board unit and road side technology in combination with an operational system provided and run by IBM.

Payment is via a number of channels including by direct debit triggered by the recognition of the on-board electronic tag that is loaned to drivers. Q-Free cameras can also detect and record car number plate images using Automated Number Plate Recognition (ANPR) software to identify those vehicles without tags, and are also used to verify tag readings and provide evidence to support the enforcement of non-payers.

The use of the transponders fitted in vehicles means the system has a more reliable capture rate and a more cost-effective back-room operation than congestion charging systems that do not use such devices. It also makes it far easier to operate variable charging with automated direct debit after the passage.

“The payment gates are equipped with number plate recognition cameras to record the identity of vehicles.”

The area of Lidingö has its only access to the mainland through the congestion tax affected area – all traffic to and from Lidingö, to and from the rest of the Stockholm County, is exempt from the tax, provided that one passes the Ropsten payment station and some other payment station within 30 minutes of each other.

The Essingeleden motorway (E4) that passes through the effected area is also exempt, due to it being the main road when travelling past central Stockholm. All exits and entrances of Essingeleden that are within the congestion tax area have payment stations placed at them.

The congestion charge area includes the whole of the Stockholm city centre areas such as Södermalm, Norrmalm, Östermalm, Vasastaden, Kungsholmen, Stora Essingen, Lilla Essingen and Djurgården. There are 18 unmanned electronic payment stations at all entrances to this area (this is helped by the fact that Stockholm was built on a series of islands). The congestion tax is applied to vehicles on both entry and exit of the affected area.

The payment gates are equipped with number plate recognition cameras to record the identity of vehicles passing through. Over 400,000 drivers in Stockholm have already equipped their cars with a transponder for easy payment and can pay automatically by Autogiro directly from their bank account.

The amount to pay depends on the time of the day the driver enters or exits the congestion tax area. The tax may be paid directly via a website or over the telephone by credit card, or alternatively it can be paid at any 7-11 and Pressbyrån convenience stores in the City.

The tax is not paid on Saturdays, Sundays, public holidays or the day before public holidays, nor during the night time period (18:30–06:29). The maximum amount of charge per vehicle per day is 60 SEK (€6.44, $8.23, £4.42). If the charge is not paid within five days, a reminder is posted to the driver with an additional charge of 70 SEK; if the charge is not paid within four weeks an additional fine of 500 SEK is added and if not paid then the authorities can automatically remove the amount from the offenders bank account.