Joint venture between Parsons and HNTB 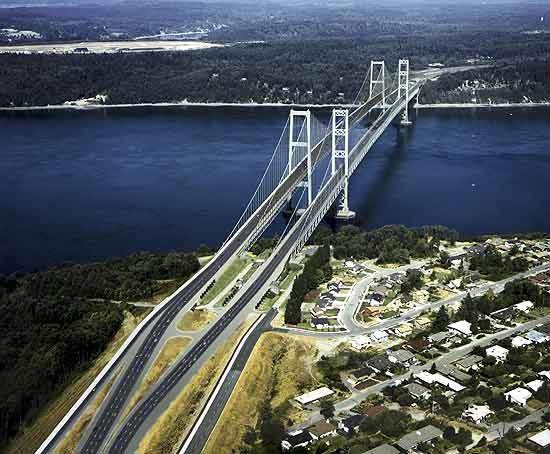 The new Tacoma Narrows bridge will be 5,400ft long and will comprise two eastbound general-purpose lanes, one HOV lane and a bicycle/pedestrian lane.

Washington State Department of Transportation (WSDOT) was allowed to proceed with the Tacoma Narrows’ third bridge bridge after a voting held in 1998. The first bridge, built in 1940, proved to be too susceptible to strong winds and was nicknamed ‘Galloping Gertie’ by locals. Following its collapse in November 1940, the bridge was replaced in 1950 by the current bridge. The third bridge, completed in 2007, spans the Tacoma Narrows parallel to and south of it. This bridge, however, did not replace the second bridge.

The SR16 corridor (which the bridge is on) is used by 85,000 to 90,000 vehicles per day and this figure is expected to rise to 120,000 vehicles per day by 2020. The capacity of the second bridge was not able meet traffic requirements so, as part of the project, it was reconditioned in 2008 and brought up to current seismic standards. The second bridge acts as the westbound route and the new bridge the eastbound one. On top of this and the new suspension bridge, a 3.4-mile stretch of SR16 was improved by adding an extra lane to it and introduced new interchanges and a new toll plaza.

The design-build contract was overseen by Tacoma Narrows Constructors, a joint venture of Bechtel, Inc. and Kiewit Pacific.

The new bridge, designed by a Parsons / HNTB joint venture, is 5,400ft long and comprises two eastbound general-purpose lanes used for all kinds of traffic, one high-occupancy-vehicle (HOV) lane and a bicycle / pedestrian lane. In addition to this, the new Tacoma Narrows bridge has the structural capacity to carry a light rail line or an extra highway lane if need be.

With a centre-length span of 2,800ft, this is the longest suspension bridge built in the USA since the Verrazano Narrows Bridge was opened in 1964.

“The new Tacoma Narrows bridge has the structural capacity to carry a light rail line or an extra highway lane if need be.”

Over 35.5 and 12 million pounds of structural steel was used in superstructure and suspension system respectively. The bridge is held in place at either end by over 23,000yd³ of anchoring concrete.

The second Tacoma Narrows Bridge, fifth longest suspension bridge in the US, was upgraded as a part of the new bridge project. The present bridge configuration is two non-standard lanes in each direction with metal grates between the lanes; it has no central dividers or shoulders. The upgrade converted it from this state to a three-lane, westbound-only route with standard width lanes, a uniform driving surface and an exterior shoulder.

A 3.4-mile stretch of SR16, stretching from the Jackson Avenue interchange in Tacoma to a new interchange at 24th/36th Streets in western Pierce County was upgraded with an extra lane to help ease traffic flow after the completion of the project.

SR 16 is a strategic segment of the National Highway System and, as part of it, the Tacoma Narrows crossing is the only land link across Puget Sound. The highway links the I-5 corridor with the Kitsap and Olympic Peninsulas and provides important access to several military installations and Olympic National Park.

“The highway links the I-5 corridor with the Kitsap and Olympic Peninsulas and provides important access.”

The toll is chargeable only for the eastbound direction. Tractors with six or more axles are charged $12 for cash and $8.25 for good to go scheme. The toll rates are determined by the Washington Transportation Commission.

The toll charge is collected by a new toll plaza, installed by TransCore. The toll plaza features manual and high-speed electronic collection facilities, the latter allowing traffic to be tolled without slowing down. Automatic vehicle identification technology, coupled with a violation enforcement system, allows this to be done.