5 interchanges that will eventually expand to a 6-lane facility with the possibility of a light rail line running between the carriageways, 29 exit / entrance ramp toll plazas 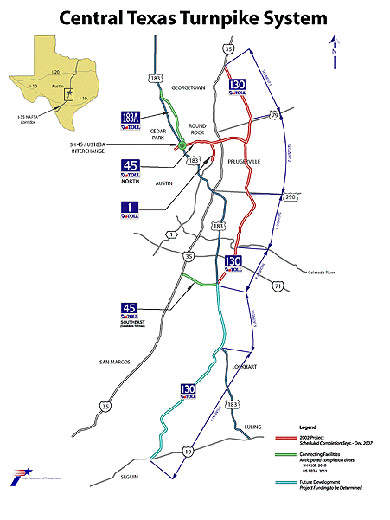 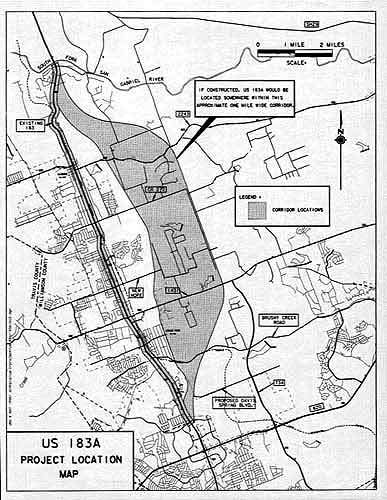 Map showing proposed route of the US 183A route. 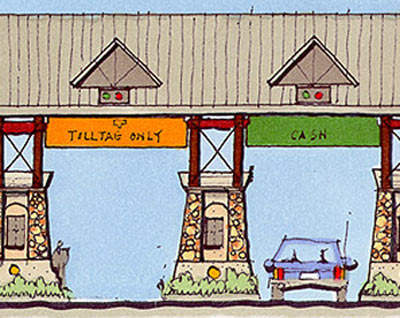 Design sketch showing the 'theme' for the toll collection points. 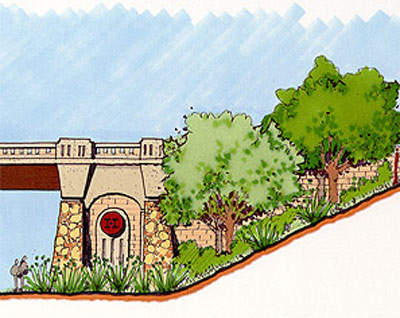 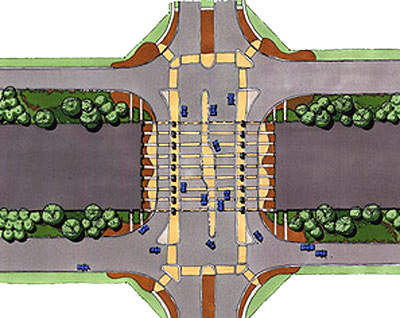 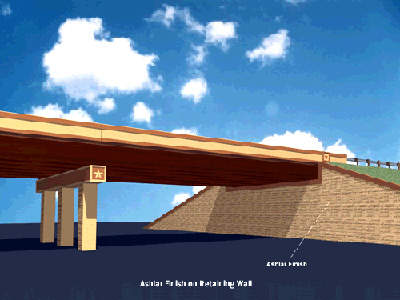 Each rectangular column at the interchanges, along with retaining walls, has an ashlar finish. 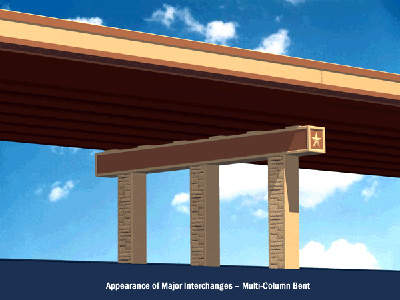 The end caps for each column along the SH 130 have a star as the symbol. 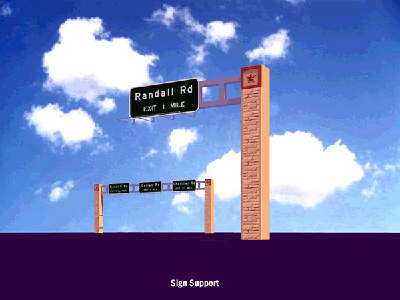 Sign supports consist of square columns with an ashlar finish. 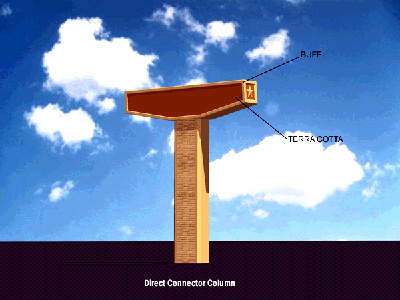 As this direct connector column shows, the color scheme for the CTTP makes use of buff and terracotta. 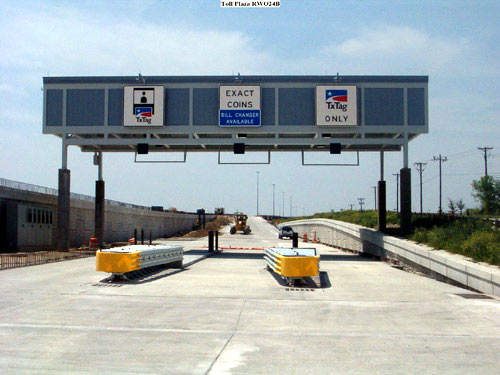 SH45 toll under construction; it now has four lanes and opened in spring 2007.

This system of four interconnecting roads in the greater Austin area was completed during the fall of 2008.

Almost $500m in funds and rights of way was contributed by the local regions, including Travis County, Williamson County, the City of Austin and the City of Round Rock. Additional funds came from bonds sold by the TTA and will also be collected by toll revenues.

Zachry Construction and joint venture partner Gilbert Construction were awarded the contract to construct the SH 45, US 183A roadway, the Loop 1 extension to the future SH 45, and a four-level T-interchange to connect SH 45 to US 183A. Austin Bridge and Road is a construction contractor on SH 45.

By far the biggest project in the Central Texas Turnpike System is the SH 130. The consortium Lone Star Infrastructure (LSI) was contracted to design, construct and maintain the 90-mile highway. LSI is a joint venture between Fluor Corporation, Balfour Beatty Construction and TJ Lambrecht Company.

OR Colan & Associates, working on behalf of TxDOT, were involved in land acquisition for the SH 130, and Macias & Associates were responsible for surveying and mapping. Hicks & Company provided a broad range of environmental management and planning services. TBE Group was responsible for minimising the need for utility relocation and eliminating disruptions in utility services

“The biggest project in the Central Texas Turnpike System is the SH 130.”

Bridgefarmer & Associates provided quality assurance for the design process on SH 130. OTHON, Landtech Consultants and Terra-Mar were consultant engineers to the design project. Atkins-Benham was contracted to support signalisation and traffic control for the design quality control team.

The final part of SH 45N was finally opened in spring 2007. This part of the road system now provides relief of congestion on Loop 1 and other surrounding roadways by giving a better route between northern Travis and southern Williamson counties.

The first 49-mile segment of State Highway 130 (located east of I-35 through Williamson and Travis counties) was constructed on a five-year schedule and was completed in April 2008. The four-lane project was constructed in four segments:

Also included in the project are five interchanges (I-35, US 79, SH45 North, US 290 and SH 71).The road is being expanded to a six-lane road with a light rail line running between the carriageways.

Segments 5 and 6 of SH 130 comprise of a 40-mile section. Construction started in April 2009, and completed in October 2012. Segment 5 bypasses the city of Lockhart running parallel to US 183 and Segment 6 runs from US 183 to Interstate 10, passing the City of Lockhart to the west.

“The landscaping of SH 130 follows a natural theme, with Texas wildflowers, native plants of the Blackland Prairie and native Texas trees.”

It was important when developing the aesthetic design of the SH 130 that it was distinctive, memorable, safe, low maintenance and blended in with the natural environment. Regional characteristics considered included the earth tone colours of the surrounding environment, the use of limestone, regional building patterns and styles, and indigenous vegetation.

Consistency of the theme was achieved using a standardised palette of materials, colours and shapes, and landscape materials that reinforced the natural character of the corridor while preserving as much existing vegetation as possible. The designers’ challenge was to develop standards that could be used throughout the project, yet with sufficient flexibility to satisfy aesthetic, budgetary and functional expectations.

Some design elements that were used throughout the SH 130 included:

The landscaping of SH 130 follows a natural theme, with Texas wildflowers, native plants of the Blackland Prairie and native Texas trees. Also incorporated are some elements with cultural significance, such as cedar fencing and rubble stone walls.

SH 130 is a toll road, and the cost to drive along it is approximately $1.50 and approximately $0.74 for SH 45N/Loop 1. With the use of an electronic toll tag, called TxPass, motorists will receive a discounted rate. TxPass is a transponder device developed by TxDOT that is mounted on the inside windscreen of a vehicle. TxPass is also valid on other toll roads in the state.