4,000, 300 VMS sites, a further 1,400 safety signs can be used to manage local traffic in the event of incidents and emergencies

5,130 miles, 2% of all roads but carrying a third of all traffic and two-thirds of all freight 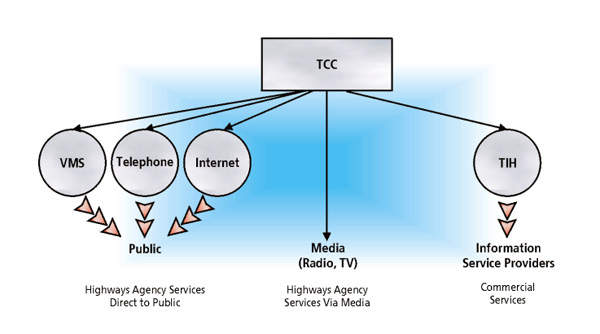 The NTCC distributes information to the public via many mediums.

The National Traffic Control Centre (NTCC) based in the West Midlands is an ambitious telematics project aimed at providing free, real-time information on England’s network of motorways and trunk roads to road users, allowing them to plan routes and avoid congested areas.

In order to achieve the main goals of reducing congestion and improving journey time reliability a real-time traffic monitoring and modelling system has been installed along with supporting technology and structures designed to dispense this information to road users and national agencies.

“New and existing technology at 4,000 strategic monitoring sites continuously monitor the state of the country’s core routes and feed that information to the NTCC.”

The contract with TiS is for ten years (2001 to 2011); this includes the 29-month design and build phase followed by a seven year, seven month management and operation contract.

Payment to TiS is linked to a strict set of guidelines and targets although TiS is also able to subsidise this through the sale of information to value-added service providers.

A consultant Carl Bro, now known as Grontmji, was engaged by the Highways Agency in 1998 to integrate a team with Serco to determine how well the NTCC works and how the contract with TiS (Serco) should be paid. The estimated value of the contract was £160m. The NTCC went live in mid-2004.

The National Traffic Control Centre itself was officially opened by the Transport Minister Alistair Darling at Quinton in Birmingham near junction 3 of the M5 in March 2006. The NTCC building consists of two rooms with a host of redundant computer equipment which is based on PC and Windows NT technology and manned with Serco’s team of 150 intelligent transport system software engineers.

As part of the NTCC project, Serco awarded a project to Marconi worth £5m in the first quarter of 2001 to install a broadband network based on Synchronous Digital Hierarchy (SDH) / Asynchronous Transfer Mode (ATM) transmission and switching technologies. The Highways Agency (HA) uses three quarters of the bandwidth to improve its own communications network and a quarter for the NTCC project.

Marconi installed its tried and tested SMA4 and CMUX-2 add/drop multiplexers and the ASX-200BX and ASX-1000 high-performance multi-service broadband switches. The Marconi engineers installed a ‘rack’ in each of over 50 motorway side transmission stations, at 18 police control offices and the NTCC in the Midlands. The broadband network was completed in July 2003.

The HA also implemented a scheme called the National Roads Telecommunications Services Project (NRTS) in 2004, which was designed to upgrade and add to the existing communications network alongside the UK’s motorway network, including CCTV, Variable Messaging Signs (VMS) and emergency telephones. This network is designed to increase the detection and signage infrastructure on UK motorways for the HA, regional control centres and the NTCC.

New and existing technology at 4,000 strategic monitoring sites continuously monitor the state of the country’s core routes (5,130 miles) and feed that information to the NTCC. The information is analysed and fed back to roadside VMSs and other public mediums.

The NTCC takes data from traffic detectors, CCTV and weather monitoring (including fog sensing) systems and analyses it alongside information concerning planned and unplanned events, and a GIS-based database of the core HA road network which contains detailed physical descriptions and theoretical capacities.

Ongoing upgrades of the communications systems along the core road network are crucial to the effectiveness of the NTCC. TiS will build on the regional systems and continuing improvements in the communications infrastructure in the implementation of the wider strategy and take responsibility for the strategic operational aspects.

TiS works closely with the police and Local Highway Authorities (LHA) as well as other regional agencies (National Assembly for Wales, Scottish Executive, Transport for London) and media and information service providers to ensure that information is accurately received and acted upon.

With the police, for example, the NTCC provides information concerning incidents. A special protocol allows the NTCC to ‘speak’ to the police systems which are based upon a specific location referencing system. As well as this, NTCC maintain and make available up-to-date records of contact details (LHAs, other Police forces, HA contractors, any other interested parties), general network information (traffic characteristics, physical attributes of the network) and information on planned events.

Providing this information to media and information service providers requires a system that translates the location referencing system into a more intelligible version using colloquial descriptions of parts of the core network.

Utilising the existing network of VMSs, the NTCC attempts to divert traffic around incidents and congested areas by simply warning drivers and offering alternatives.

“Ongoing upgrades of the communications systems along the core road network are crucial to the effectiveness of the NTCC.”

VMSs are becoming more sophisticated. The new Motorway Signal Mark 4 (MS4) colour matrix sign was trialled on the M4 corridor for two years and has now become the standard. These signs have in-built CCTV and improved LED technology.

A new driver information system has also been installed on junctions 18 to 20 of the M4, the M4/M32 junction and junction 2 of the M32, which was by September 2006. This system, part of the NTCC, includes 27 new VMSs, five CCTV cameras and traffic detector loops. The work was carried out by Carillion Maintenance.

The information provided by the NTCC about the road network is also available in many other mediums with different interfaces. Internet users are able to plan routes based around planned incident data, up-to-the-minute traffic reports and known network trends.

The government was instrumental in getting Serco to set up the Travel Information Highway (TIH), which is a mechanism designed for exchange of travel data using common frameworks over the internet.

Possible future expansions include the integration of this system with a Europe-wide network. Other telematics programmes around Europe all work on different systems but the idea of an international European traffic system is a common goal throughout.