The sixth Walton Bridge crosses the Thames in one span. 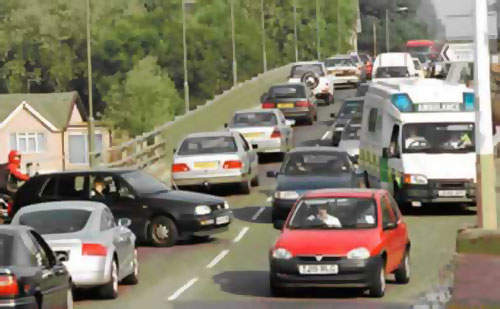 The sixth bridge reduces traffic congestion at the crossing. 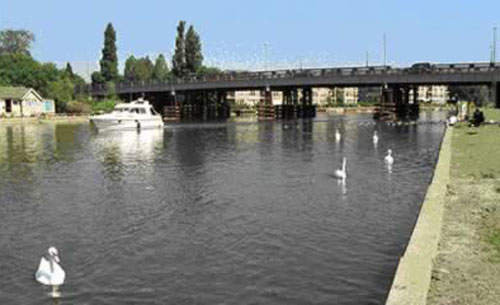 The fourth and fifth bridges were replaced by the new sixth bridge.

Walton Bridge crosses England’s River Thames, connecting Shepperton and Walton. The road across the bridge is part of the A244, which links Feltham, Sunbury, Hersham, Esher, Shepperton, Oxshott, Walton and Leatherhead.

The previously existing structure was the fifth Walton Bridge, constructed in 1999, and was open to pedestrians, vehicles and cycles.

Approximately 1,200 heavy goods vehicles used the bridge daily, and about 34,000 vehicles used it on weekdays. The bridge is owned by Surrey County Council.

Construction of the new sixth bridge began in January 2011 and was completed in July 2013. It replaced the fourth and fifth Walton Bridges.

Purpose of the Walton Bridge

“Construction of the new sixth bridge began in January 2011 and was completed in July 2013.”

The third bridge – built in 1864 – was damaged during World War II, which necessitated building the temporary fourth and fifth bridges in 1953 and 1999.

The intended lifespan of the fifth bridge comes to an end in December 2014. Surrey County Council and the UK Government therefore decided to build a permanent bridge in its place.

Construction of the bridge

The fifth bridge remained open during the construction phase, but was closed to traffic overnight or at weekends.

Excavations and vegetation clearance were performed to make the site ready for the construction of a boundary wall.

Other preliminary site clearance works, such as locating and marking cables and pipes in the vicinity, were also carried out.

An archaeological investigation on the ground started in mid-April 2011. It involved excavation of a number of trenches and was completed in September 2011.

Most of the earth moving works for landscaping were performed. Works were carried out to move the pipes and cables at the main construction site.

Other construction works included expansion of the Cowey Sale car park and demolition of properties near the river.

The new bridge crosses the Thames in a single span and has a slender roadway, which is supported from the two arches by hangers.

The height of the new roadway is raised 0.1m higher than the previous bridge to provide additional headroom for boats.

The new bridge has a 3.65m lane in each direction, and a 3.5m-wide footway or cycle way on both sides.

The new design incorporates a T-junction at Walton Lane; the road was widened to accommodate a third lane of traffic at this point.

The design of the sixth bridge resolves many of the problems associated with the fourth and fifth bridges — in particular reducing congestion on the river crossing on Cowey Sale junction by removing bottlenecks. The design also intends to reduce accidents.