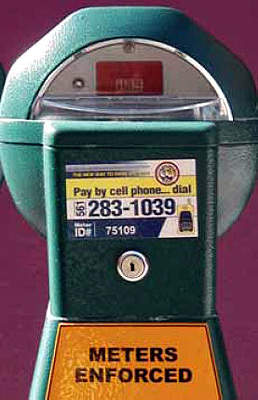 One of the sticker modified meters. 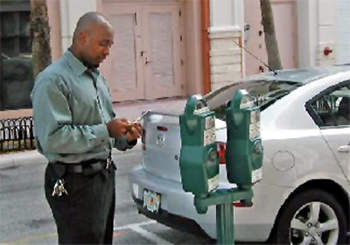 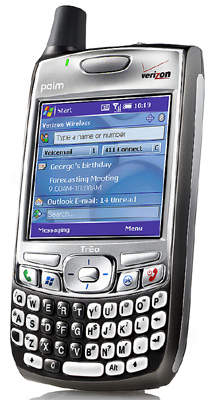 Palm Treo, the prefered wireless PDA for the system. 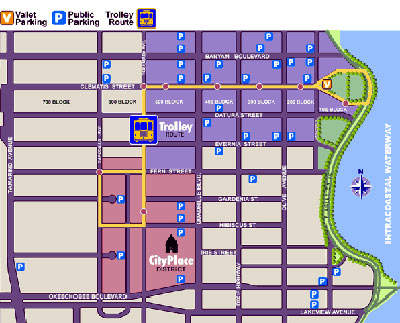 Areas of operation for the new system in WPB (parking garages shown). 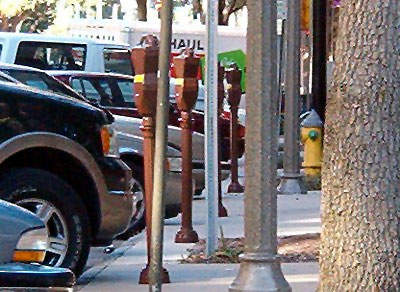 Meters in use in WPB.

In October 2006 Mayor Frankel of the City of West Palm Beach, Florida, US, announced the introduction of a new, innovative city parking system. The system, which came into effect at the start of November 2006, involves the payment for parking by using a mobile phone to make a call.

Mayor Frankel said: “This new parking system will offer a great convenience for people who work, live, shop, and play in downtown West Palm Beach… This system will make it easier than ever to pay for parking at meters, and we’re excited to be able to offer it to our residents and visitors.”

The system is called the Electronic Parking Payment System or EPPS. Sue Olley, Director of Parking Systems, said: “This is an innovative, state-of-the-art way to pay for parking… We are one of the first cities in the nation to offer this service to motorists, and the only city in the nation to offer it to our customers free of charge.”

The EPPS pay-by-cellphone system allows motorists to pay for parking meters in the downtown area by using their cellphone (caller ID must be enabled on the phone) rather than using spare change. Motorists must first register for the system; registration is free and there is no transaction fee.

After registering for a free account (giving personal information, a credit card number and the car’s license plate number), all the motorist has to do to pay for parking is to call in from their cellphone and enter a parking meter ID number, which is located on the meter.

The system continues the parking time until it is told to stop, or until the maximum time allowed for the parking meter has been reached (this depends upon the meter). Computers, equipped with an electronic record of the parking fee schedules associated with that meter, then charge the correct amount to the credit card.

To pay for more time, simply call the number again. The payment system uses CallerID to identify the parking spot (meter id#). When the motorist is finally ready to leave, another call ends the billing and generates an electronic receipt that can be sent to a cell phone or to a pre-registered email address (for expense and tax claims).

The system was developed and introduced by New Parking Inc. New Parking Inc is a Calgary-based company using its own proprietary software and existing advanced wireless technologies to automate many parking industry operations, starting with payments and enforcement. The company’s first application is the Electronic Parking Payment System (EPPS).

New Parking uses leading edge technologies, and so instead of pre-recorded voice files – so common with interactive telephone systems – they use ‘TTS’ also known as Text-to-Speech technology, where the voice heard is generated by a computer in the real time.

It has many advantages, such as the customer can be told what parking meter number they were parked at. The parking system is supported by the city’s parking meter management software, which is WinEMU and Cell Parking supplied by MacKay Meters. The management system provides full audit control and overall system reconciliation.

“The programme had 520 transactions in just the first two weeks of November, surpassing the entire month’s goal in just 14 days.”

POPULARITY OF THE SYSTEM

The first month ended with 1,300 transactions. The second month finished at 1,700 transactions, with repeat users accounting for more than half of the transactions. So the trend can be seen of the system gaining credibility and use with the parking motorist.

Because of the simplicity of the system the costs to implement it were minimal. Sue Olley said: “We had to relabel each meter to provide clear space identity; purchase three wirelessly enabled Palm Treos (three were donated); and do some manual data entry to activate site locations in the Cell Parking and WinEMU parking meter management systems.

“Total cost for implementation of Cell Parking on the system was approximately $5,000. Ongoing costs to the city are minimal and directly related to use of the system.”

Future initiatives with the Cell Parking programme will include on-street validations, text messages for expiring meters and a tell-a-friend promotion.