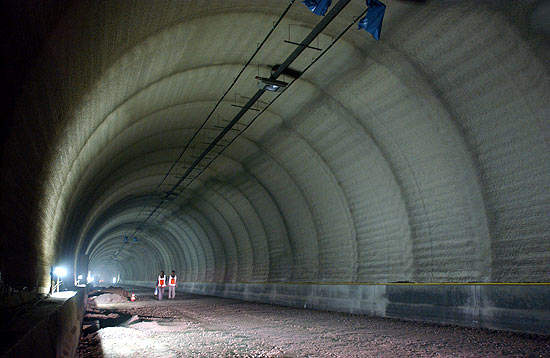 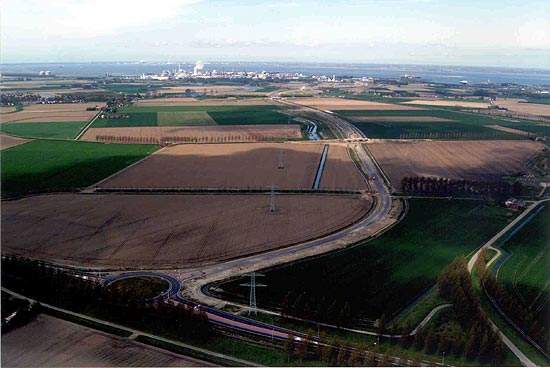 With an estimated cost of €726m, the Westerschelde Tunnel will provide a faster and more economical route for around 27,000 vehicles a day between Ellewoutsdijk in Zuid-Beveland and the Zeeuws Vlaanderen region near Terneuzen. 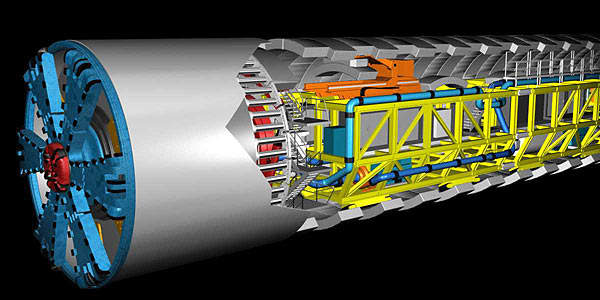 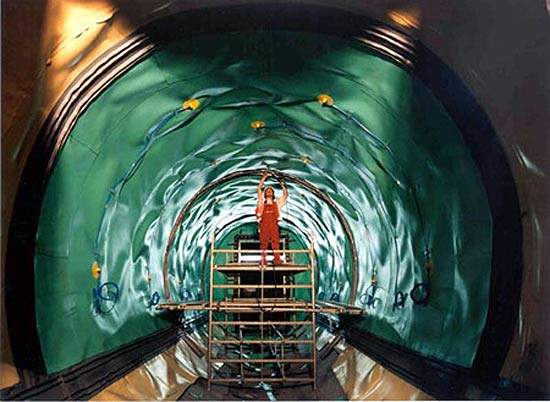 Inside the 8m cylinder hydro shield under the Westerschelde. 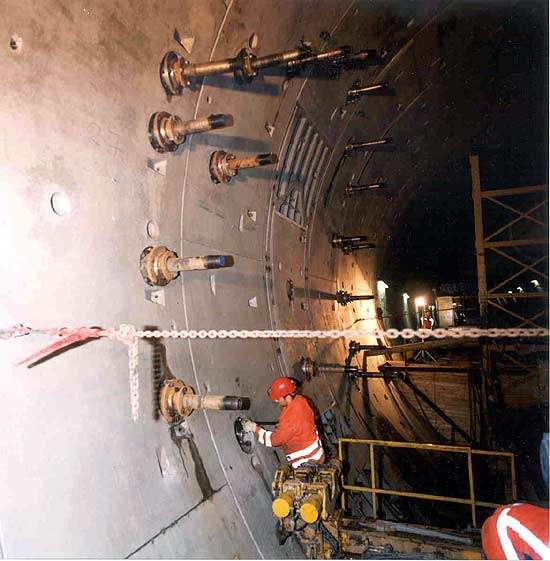 One of the 53,000 concrete lining segments being put in place. 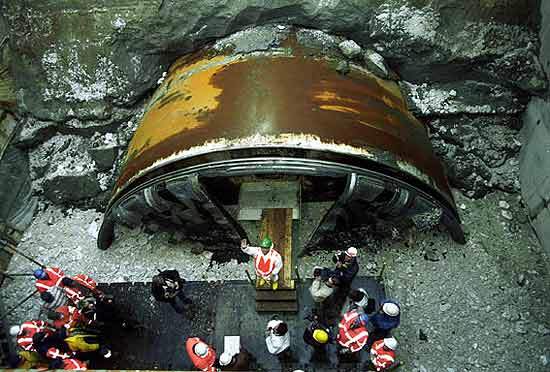 The particular challenge that faces the construction of this tunnel is the soft clay that has to be bored through.

The Dutch Province Zeeuwsch-Vlaandren is cut off from the other parts of the Netherlands by the Westerschelde port entrance to Antwerpen. Projects for a permanent road connection have been made since the 1930s. The solution to this is the Westerschelde Tunnel: an undersea highway tunnel, 6.6km long, consisting of two tunnel tubes, each with two lanes (3.5m each), with 26 cross passages every 250m.The tunnel had cost €726m and was opened to traffic in March 2003.

The Westerschelde Tunnel provides a faster and more economical route for around 27,000 vehicles a day between Ellewoutsdijk in Zuid-Beveland and the Zeeuws Vlaanderen region near Terneuzen. KMW (Kombinatie Middelplaat Westerschelde v.o.f consisting of Philipp Holzmann, Wayss & Freitag, Franki, BAM Infrabouw, Heijmans and Voormolen) were awarded the contract for the design, construction and maintenance for the tunnel for the first ten years of operation, by NV Westerschelde Tunnel.

The Westerschelde Tunnel consists of two lanes (3.5m width in each direction) including safety areas. The fire protection sheathing and constructional tolerances make a clear diameter of 10.1m. A segment thickness of 45cm and annular gap grouting of 16.5cm make the TBM’s outer diameter 11.33m. The total length of the tunnel is 6.6km per tube with 26 cross passages run every 250m connecting both tubes. The passages have a cross section of 2.5m x 2.7m, a length of 12m and a clear width through the passage doors of 1.5m. The cross passages are vital to the safety of the Westerschelde Tunnel.

An inspectable service channel below the roadway houses all the wiring for the tunnel outfit, such as air control, signalling, supplies and the safety and communication system. Each cross passage has an underground floor that accommodates electrical distribution boxes. Additional drainage appliances are found at the tunnel bottoms. The fire protection sheathing of the tunnel is designed for a fire-load of 1,350ºC.

“The particular challenge that faces the construction of the Westerschelde Tunnel is the soft clay that has to be bored through.”

26 cross passages running every 250m were built using ground freezing methods. A frosted ‘body’ of 2m thickness was produced around each cross passage by drilling 22 holes for freezing. Special investigations were made into the influence of salt content of the groundwater and the behaviour of the Boomse clay during freezing as well as the changes of its geological features after thaw.

The container size refrigerating plants are positioned inside the tunnel directly beside the cross passages. Calcium chloride solution, applied with a temperature of -37°C is refrigerating medium. The ‘bodies’ take about 30 to 45 days to freeze, depending on ground conditions.

A particular challenge faced during the construction of the Westerschelde Tunnel was the soft clay that had to be bored through. The more sticky, highly-plastified Boomse clay posed geological problems. With the bulk of the tunnel running at up to 60m below sea level, engineers had to design TBMs (tunnel boring machines) comprising of three basic units. The TBMs bored through a whole cross-section of tunnel tube at a forward speed of 12m per day and per tube. Two Mixshields (11.3m in diameter) provided by Herrenknecht, started from an artificial polder at Terneuzen and bored through to 20m deep concrete caissons at Ellewoutsdijk. ‘The machine, named Sara, bored through the east tube, and ‘Suzanna’ the west. The two tunnels are the deepest ever to be driven worldwide and posed the greatest challenge to date in terms of machine layout, processing and construction. An open spoke-type cutting wheel with rim, an active centre cutter with own flushing circuit, agitators and a rolling crusher in front of the suction pipe enabled optimum material transport.

Both tunnel tubes have a concrete lining of 53,000 segments, which were placed in position by the boring machine, after boring.

“Both tunnel tubes have a concrete lining of 53,000 segments, which are placed in position by the boring machine after boring.”

Local roads were not able to cope with the huge amount of material transport, therefore all major items were supplied via ship and handled at an own landing facility.

The production of the 53,000 concrete segments took place in a twin plant on site. All material going into the tunnel was transported exclusively by rail.

Eight Schöma locomotives and 80 wagons operated out of the logistics centre in Terneuzen and were responsible for the transport of the people and materials needed for the construction of the tunnel.

About 275,000t of concrete was transported in all. Some of the 1,600,000m³ of spoil produced by the tunnelling was used for the concrete, with the remainder was dumped off-site.

A tunnel for life?

The Westerschelde Tunnel is the first engineering structure in the world to be designed in a fundamentally correct way on the basis of a designed service life – in this case, 100 years. The intended functions and required reliability were defined and it was then determined which functions would be adversely affected by concrete deterioration. The structural design models were prepared to account for the expected erosion. The built tunnel is a 6.6km long undersea highway tunnel, running at up to 60m below sea level making it the deepest ever worldwide. Two tunnels, each 10.10m wide run alongside each other providing northbound and southbound traffic routes that connect the Zeeuwsch-Vlaanderen province to Ellewoutsdijk in Zuid-Beveland, for around 27,000 vehicles per day.