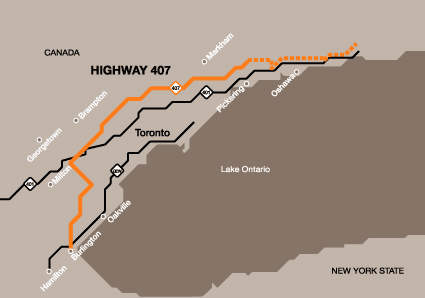 The 407 ETR runs east-west just north of Toronto (Canada's largest city), from QEW to Highway 7, a total of 108km. 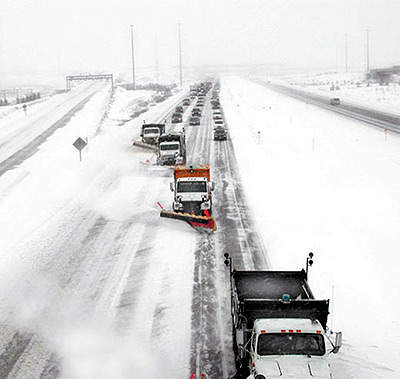 There are 24 state-of-the-art salt spreaders and 23 snow plough trucks stationed at four locations along the highway. 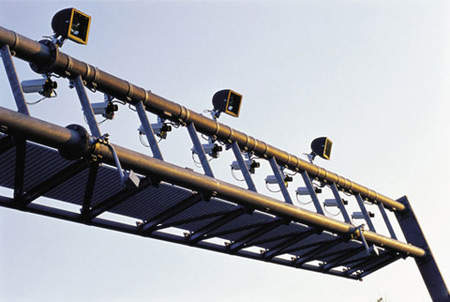 As a vehicle passes under the gantries, a Vehicle Detector and Classifier (VDAC) identifies it. 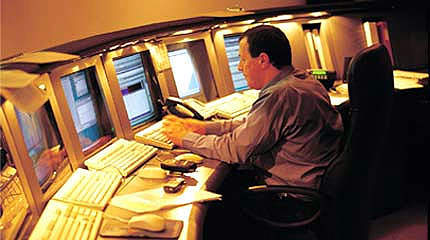 Entry and exit data are sent to the roadside computer and then via fiber optic cable to the Operations Centre. 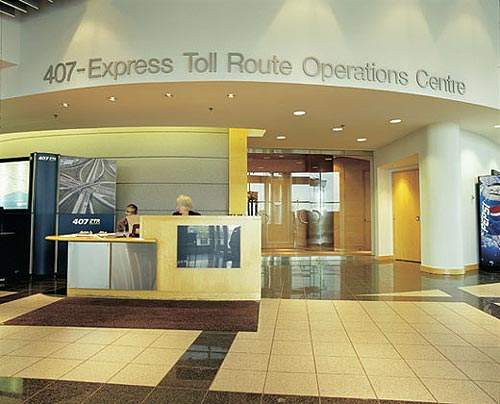 The Highway Operations Control Centre monitors and records activities on the highway. 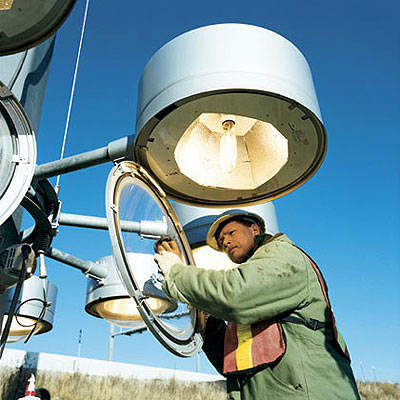 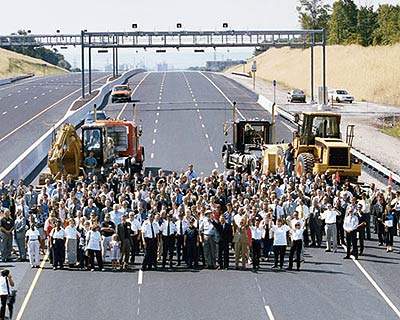 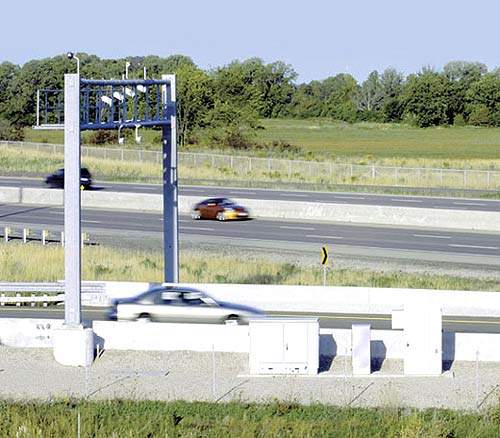 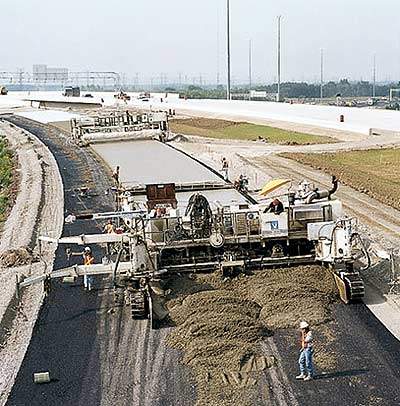 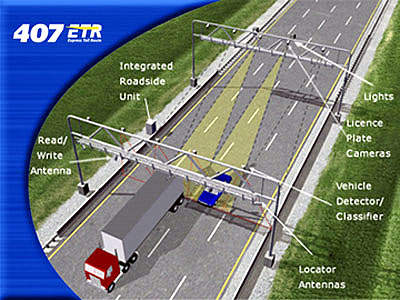 The 407 Express Toll Route (ETR) was one of the first open access all electronic toll highways.

The 407 Express Toll Route (ETR), one of the first open access all electronic toll highways, opened its first sections in October 1997. The road, which runs east-west just north of Toronto, Canada, was constructed for the Ontario Provincial Government by Raytheon. Raytheon also operated the road for the government during its initial operation from October 1997 to 1999.

In 1999 the province sold the 407 ETR for almost double the original investment. The government built the highway for approximately CA$1.6bn and the 407 ETR Consortium bought it in 1999 for CA$3.1bn (plus CA$900m for future construction and working capital). The current value of the highway is over $10bn.

In 2001, under a new contract, Raytheon supplied and integrated new additional roadside equipment. This increased the total number of lanes tolled from 190 to 320 and enhanced the central processing system to provide additional capacity and functionality. Tolling system operations and routine maintenance have now been passed to the operator but Raytheon continues to provide engineering and maintenance services.

The construction of 407 ETR was one of the largest road construction projects in Canadian history. The first 36km stretch, from Highway 410 in Brampton to Highway 404 in Markham, opened in 1997 ahead of schedule. The highway then opened in a series of stages, until in 2001 it had reached its full extent of 108km.

To accommodate future traffic needs, 407 ETR has the capability of expanding from six to ten lanes.

When first opened the majority of the sections of the 407 ETR had six lanes. Over the years the number of lanes has increased, with many sections widened to accommodate more traffic. In 2005–2007 over $180m was invested to add over 100km of new lanes between highways 400–404, 401–427 (this project alone required $90m), 427–404 and 410–427 with modifications to bridge structures to accommodate the new width as well. Investment in widening the highway is continuing.

A small electronic ‘transponder’ is attached to the windscreen behind the rear-view mirror. The system automatically matches transactions at entry and exit ramps to form ‘trips’ supporting a distance-based tolling policy. The electronic sensors located on each overhead gantry log the 407 ETR entry and exit point. On exit, a green light on the transponder and four short beeps indicate the toll transaction has been successfully completed.

“To accommodate future traffic needs, 407 ETR has the capability of expanding from six to ten lanes.”

If the traveller is not from the area or simply chooses not to lease a transponder trips are logged by using a state-of-the-art, number plate recognition system. This is based on a high-performance video capture, AVI (automatic vehicle identification)/video correlation and image processing system.

The toll charge is then added to a CA$3.35 Video Toll Charge per trip. Transponders are mandatory by law for heavy vehicles, which have a Registered Gross Vehicle Weight (RGVW) of over 5,000kg (5t).

The system was developed by CHIC and the Appian Group and combines Automatic Vehicle Identification (AVI) technology with license plate video imaging.

When the vehicle enters the highway, it passes under two overhead gantries and locator antennae determine if the vehicle is equipped with a transponder. If it is, read / write antennae read the account number from the transponder and note the point of entry, time and date.

In addition, as a vehicle passes under the gantries, a Vehicle Detector and Classifier (VDAC) identifies it. The VDAC uses laser scanners to check that vehicles carrying transponders are correctly classified as either passenger or commercial vehicles. It does this by measuring the height, width and depth of each approaching vehicle to build a profile, which it compares with the class data stored on the transponder. The same process occurs when the vehicle exits the highway. The entry and exit data are sent via fibre optic cable to the Operations Centre, where the data is matched and the transponder account holder is debited.

In February 2007 the toll rate was increased by 1.35 cents per kilometre for light vehicles to 17.6 cents. The rate for heavier vehicles was unchanged.

When a motorist without a transponder enters the highway and passes under the two tolling gantries, locator antennae alert the roadside computer that the vehicle does not have a transponder. The VDAC system uses laser scanners to classify the vehicle and tell the toll collection system whether to charge for a passenger or commercial vehicle.

At this point, the system triggers digital cameras, which take electronic images of the rear number plate of the vehicle from different angles. A light meter automatically varies lighting to ensure the best conditions for taking an image of the number plate. The cameras have been tested to ensure accuracy, even in blizzards and rainstorms. The same process occurs when the vehicle leaves the highway.

Entry and exit data are sent to the roadside computer and then via fiber optic cable to the Operations Centre. A computer at the Operations Centre matches the data and a transaction charge is assessed based on the time of day and distance travelled. The owner of the vehicle is identified through government records and is sent an invoice in the mail. Cheating or refusal to pay invoices results in plate denial, meaning that a debtor can not renew their license plate or obtain a new license plate until all tolls and fees have been paid.

The information collected by the toll systems must be archived for future reference; this is accomplished by the use of SAND Technology analytical server. SAND was awarded a contract in 2003 (worth CA$900,000) for a data warehousing system. SAND provides software and services to integrate data from both the PeopleSoft ERP system and operational transactions systems into a centralised analytical and reporting repository.

The Roadside Motorist Assistance team patrol the highway from 5:00am to 9:00pm weekdays and during peak traffic times on weekends. The Highway Operations Control Centre monitors and records activities on the highway, 24hrs a day, and constantly monitors information from Environment Canada to anticipate road conditions and surface temperatures as well as moisture and chemical (salt) conditions.

There are 24 state-of-the-art salt spreaders and 23 snow plough trucks stationed at four locations along the highway. If a car breaks down when travelling on 407 ETR the free Roadside Assistance Patrol will provide a boost, tire change, free gallon of fuel or call a tow truck.

East extension of the 407 ETR

The extension of the 407 ETR from Brock Road, Pickering to meet Highway 35/115 has been on the agenda since the 1960s but has only been considered seriously since November 2005.

The new road extension, along with two smaller north/south linking roads connecting highway 401 to the proposed extension of highway 407.

An environmental assessment of the east extension of the highway was completed in 2009. The assessment is currently with the Ministry of the Environment (MOE) and ETR is waiting for the approval of the report.

The route of the extension will run from Pickering, Ontario through the Durham region to Clarington, Ontario. The routes of the link roads will run near Whitby and Courtice, Ontario. The preferred routes for all of these new roads were made public in June 2007. The Canadian Government and the Province of Ontario had already announced in March 2007 as part of their FLOW initiative that these new highways would be completed by 2013.