Artist's rendering of the Forth Replacement Crossing as seen from the north-east. 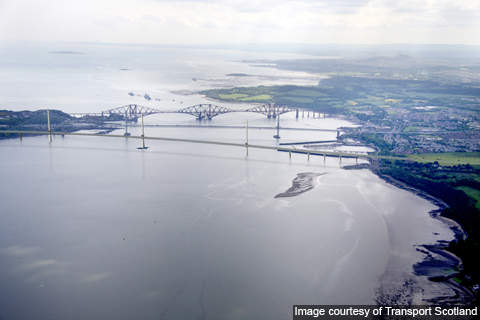 FRC as seen from the west.

Artist's impression of the three bridges, namely the proposed FRC, the existing Forth Road and Railway bridges. 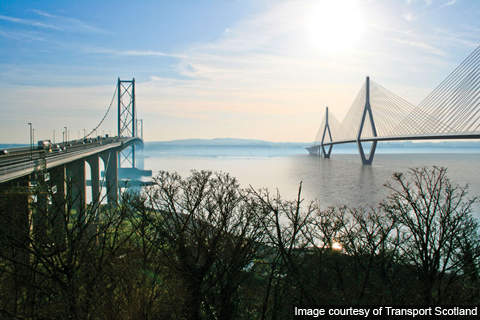 Diamond tower option was also considered as one of the design feature.

Computer generated image of Firth of Forth with the new bridge.

The Forth Replacement Crossing (FRC) is a new cable-stayed bridge built over the estuary Firth of Forth in Edinburgh, the capital city of Scotland. It serves as a replacement crossing for the deteriorating Forth Road Bridge, which provides a vital road link for maintaining the economies of Edinburgh, Fife and the East coast of Scotland.

The FRC Bill was introduced to the Scottish Parliament in November 2009. After being approved by Parliament in December 2010, the Bill received Royal Assent in January 2011.

In March 2011, the Forth Crossing Bridge Constructors (FCBC) consortium was announced as the preferred bidder to build the bridge and connecting roads elements. The consortium, comprising Dragados, Hochtief, American Bridge International and Morrison Construction, won the project tender for £790m ($1.01bn), which was £512m ($660.6m) less than the original estimate of approximately £1.3bn ($1.67bn).

Construction work began on the FRC project in June 2011 and the bridge was opened on 30 August 2017. The project was completed £250m ($322.5m) under budget, generating additional savings.

Sponsored by Transport Scotland, the bridge project represented the biggest single investment by the Scottish Government at that time.

The Forth Road Bridge was built in 1964 and started showing signs of deterioration due to increased traffic levels and weather conditions. Due to significant corrosion, the main suspension cables have suffered a 10% loss of load-bearing strength.

After an investigation, the Forth Estuary Transport Authority (FETA) concluded that replacing the cables or other repairs could not be done without disrupting the traffic across the Forth. It was also reported that traffic restrictions for HGVs might be imposed as early as 2017 and that would seriously impact the economy of Lothian and Fife.

In order to safeguard this economically vital road link, the government decided to build the FRC Bridge by 2016. Before any potential restrictions in 2017, traffic from the existing bridge was planned to be transferred to the proposed bridge.

The FRC project involved the design, construction and completion of a new bridge over the Firth of Forth. The new bridge has approach roads to the north and south of the crossing. An intelligent transport system (ITS) has been installed along the full length of the scheme.

The full length of the FRC scheme is 22km and the road passing over the bridge will be designated as a motorway from November 2017.

A slender structure, both in terms of the bridge’s deck and tower, has been achieved by adopting a system of crossing stays. This method is implemented by forming a triangle-shaped weaving pattern at the centre of the span, instead of allowing the longest stays to reach half the span.

The bridge platform carries two lanes of general traffic in dual directions. Hard shoulders are be provided to ensure that serious congestion does not happen due to breakdowns, incidents or maintenance works.

A detailed consultation process was performed to find out suitable construction compound locations. A code of construction practice was also developed to limit disturbance from construction activities.

Most of the construction work was undertaken from barges in the Firth of Forth. The transport authority, through the FRC Bill, sought provision of three construction compounds, at Echline in South Queensferry, Ferrytoll in North Queensferry, and the one near Kirkliston on the north-west side of M9 Junction 1A.

Echline Compound was the main construction compound, managing the building of the bridge and southern approach roads.

A joint venture (JV) between Jacobs and Arup was appointed as consulting engineer for the design and construction of the new bridge in early-2008. Flint & Neill Partnership, Dissing & Weitling, and EC Harris, other members of the JV were responsible for architecture and aesthetics, geotechnics, environment and landscaping, budgeting, statutory processes, and health and safety. Blom was commissioned to carry out an aerial and terrestrial survey of the site.

In September 2016, HadFab was awarded a contract to supply anti-vandalism pipes (AVPs) for the project.