X
Advertise with us
Julian 6 February 2013 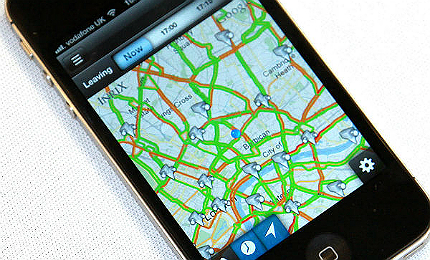 Firing what many industry observers believe is the opening salvo in a new ‘mapping war’ with Google – Google Maps had been the sole provider of mapping data for the iPhone since its introduction in 2007 – Forstall also revealed that the app will monitor iPhone owners when they drive, to create live maps of traffic congestion.

This investment in crowd-sourced traffic information – real-time data provided by motorists via smartphone apps and in-car GPS devices which is then collated and distributed for use by government agencies, car manufacturers and individual consumers at a fraction of the cost of traditional methods – proved what many industry analysts had long believed; that this democratic, collaborative process represents a seismic shift in the way traffic information is both captured and consumed.

"When we talk about crowd-sourced traffic information, we mean data that is coming from actual vehicles or mobile devices that are travelling along the road network rather than information sourced through physical infrastructure such as roadside sensors or CCTV," explains Jim Bak, director of community relations at crowd-sourcing pioneer INRIX.

"Cars can connect to the internet via applications such as Ford Sync or BMW’s ConnectedDrive system, or through a smartphone application."

INRIX, a market leading-provider of traffic information, directions and driver services, was one of the first companies to recognise and invest seriously in large-scale crowd-sourcing as a way of mitigating the financial and environmental cost of traffic congestion. In 2010 alone, US drivers wasted 3.9 billion gallons of fuel sitting idle in traffic, while traffic jams are estimated to cost the US economy more than $155bn annually.

Speaking from the company’s headquarters in Kirkland, Washington Bak emphasises the collaborative nature of crowd-sourced traffic information and the importance of accurate, real-time data streaming from both consumer and commercial fleet vehicles.

"The biggest challenge you have as a company that provides crowd-sourcing information to customers is latency – if your data is not being refreshed very quickly, you are not going to have a high-quality product," he says.

"We believe in having a mix of crowd-sourced data from both consumer devices and commercial fleets. Taxi cabs and delivery trucks are often connected via GPS 24 hours a day, so we are receiving roughly five times more information then you’ll ever get from a consumer vehicle.

"What’s nice about consumer devices, however, is that they access neighbourhoods and city streets more deeply. Our consumer-facing mobile app, INRIX Traffic, is provided for free on iPhones and Android phones. People share with us location, heading and speed via the app, and in return we supply them and the broader community with helpful traffic information. It’s a trade-off."

Battle of the apps: Waze, Google Maps and SYNC Destinations

In an effort to differentiate itself from competitors, such as Waze – a community-driven GPS navigation application that learns from users’ driving times to provide routing and real-time traffic updates – INRIX markets itself as both a software-as-a-service (SaaS) and data-as-a-service (DaaS) provider that collaborates with auto manufacturers, mobile developers, transportation agencies and fleet and internet companies.

"We are moving away from simply being a source of data to being a source of software as well, whether that’s an application in the car, on the desktop or in the cloud for use by public sector organisations to perform traffic measurement and planning," says Bak.

"If in-car traffic information is wrong, it directly influences people’s perception of the quality of that automobile."

For its part, Google Maps stole a march on rival Apple by announcing last month that it is reintroducing its traffic information service, complete with improved real-time traffic data, more accurate arrival-time estimates and, most interestingly, crowd-sourced GPS data collected from Android smartphones.

The rise of crowd-sourcing and its associated media has also forced the major automobile manufacturers to re-evaluate the importance and functionality of in-car navigation systems.

"When it comes to choosing which Tier 1 supplier or system integrator builds their traffic and navigation systems, the manufacturers are now specifiying who gets used – it’s become that important to them," explains Bak. "If the traffic information is wrong, it directly affects people’s perception of the quality of that automobile.

Navigating the future: diagnostic analysis and the I-95 Coalition

As the crowd-sourcing phenomenon evolves in tandem with social media and the industry continues to mature, Bak believes that manufacturers of traditional high-end portable navigation devices (PNDs) will be forced to reduce prices still further to compete with free offerings on smartphones.

"The content itself and the way it is consumed is constantly evolving," he says. "Automakers are still going to want to build navigation systems and have full connectivity in the car, but others will take a more hybrid approach, using a smartphone as a data port to transmit data into the in-car system.

"Manufacturers are continually looking at more creative ways to add value. For example, an automaker is looking to gain a competitive advantage by giving us access to unique data from the vehicle’s CAN Bus (controller area network), the computer system where all of the car’s diagnostics run," he continues.

"In 2010 alone, US drivers wasted 3.9 billion gallons of fuel sitting idle in traffic."

"If the braking system is working particularly hard on a certain section of road and you correlate that with weather information, you can tell if a road is clear or icy or treacherous. By providing us with access to data from the ABS or the windshield wiper system, we could use it to offer drivers alternative routing options, [for example] allowing them to negotiate a snowstorm."

Bak cites a recent project involving 16 US states as a compelling example of the success of crowd-sourcing data and analytics in the field.

Together, the states formed the I-95 Coalition (named after the main highway that runs parallel to the Atlantic Ocean from Maine to Florida) with the aim of better managing the flow of people and commerce along the road network.

"The University of Maryland found that INRIX crowd-sourcing traffic data was accurate within two miles an hour of actual speeds under all conditions," he says.