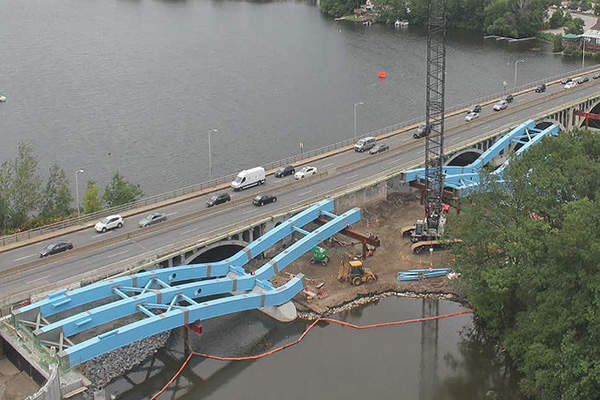 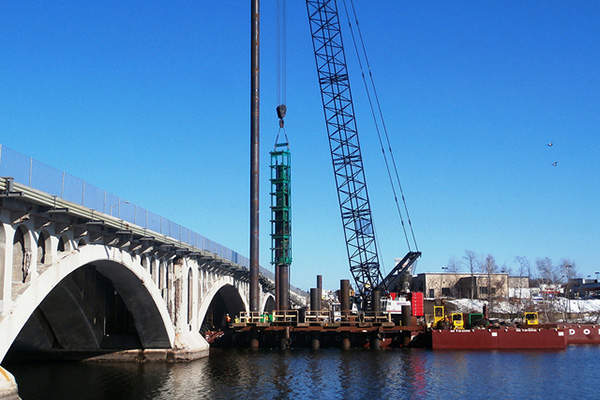 The construction of the eastbound portion linking Worcester and Shrewsbury began in 2012. Credit: Massachusetts Department of Transportation. 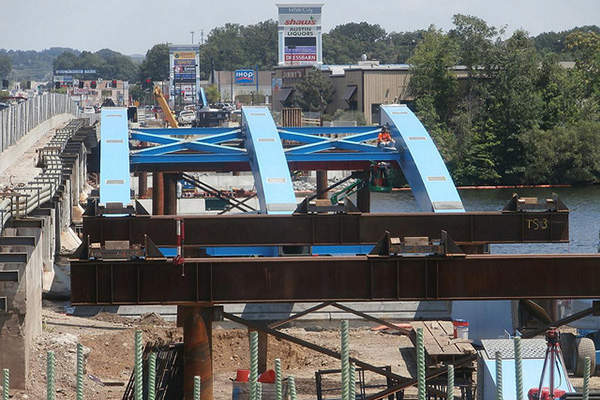 Kenneth F Burns Memorial Bridge in the US was replaced as part of the Massachusetts Department of Transportation’s (MassDOT) Accelerated Bridge Program (ABP) in the US. The original concrete deck arch bridge was constructed in 1916. It spans Lake Quinsigamond and carries Route 9, linking Worcester and Shrewsbury.

The new bridge is a five-span steel deck arch bridge with three east and westbound traffic lanes, expanding from the existing two lanes in both directions. Construction on the bridge began in late 2012 and was concluded by November 2015. A total of 100 workers were involved in the $89m four-year replacement project.

In 2008, the MassDOT Highway Division reported approximately 500 structurally deficient bridges across Massachusetts, one of them being the Kenneth F Burns Memorial Bridge. The same year, the ABP was set up by the Patrick-Murray administration with an investment of $3bn to renovate the bridges over eight years.

The replacement of the Kenneth F Burns Memorial Bridge, which carries 53,000 vehicles a day, is one of the biggest projects completed under the ABP.

The US Federal Highway Administration provided 80% of the funding, while the ABP financed the remaining 20%.

Details of the new bridge

The new widened bridge is designed to improve pedestrian safety, boost vehicular traffic volume and increase clearance for boats. The bridge is approximately 870ft from end to end and 143ft-wide.

The new bridge includes accessible pedestrian sidewalks, bicycle lanes and wider shoulders to provide space for emergency vehicles on both sides of the bridge. Sidewalks and retaining walls were also built on Lake Avenue and Belmont Street in Worcester.

The intersection of Route 9 and Lake Avenue are safer due to the exclusive left-turn and right-turn lanes that were introduced on the westbound portion of the bridge approaching Worcester. Westbound motorists are currently not permitted to turn left at the intersection, requiring vehicles heading towards Lake Avenue South to turn right onto Lake Avenue North and take a U-turn to reverse their direction.

The exclusive turns eliminate the need for this U-turn, facilitating a direct left and thus freeing the intersection.

The construction of phase 1 involving the eastbound portion next to the existing bridge began in late 2012. Piles were installed, and piers and abutments were built in the water. It was followed by the steel erection, roadwork construction and deck construction.

Phase one was completed and all the traffic was moved to the new bridge in January 2014. The old bridge was demolished by early March 2014 and the westbound portion was built at the same location.

Phase two involved the construction of bridge abutments and piers, concrete deck, barriers and sidewalk and steel erection on the westbound portion. It was opened to traffic in November 2015.

The new bridge will last 75 years. Metal strands packed tightly into pipes run below the deck of the bridge to give it long-term support.

The project seeks to minimise environmental and right-of-way impacts. It employs accelerated construction techniques and improvements in bridge aesthetics.

The construction activity is effectively managed to reduce inconvenience to motorists and pedestrians, even in peak hours. Two eastbound and two westbound lanes are always open with at least one pavement during all peak travel times.

The new bridge incorporates treatment basins on the banks. Stormwater mixed with substances such as oil, chemicals and debris that fall on the bridge is collected and treated before being discharged into the lake.

Lake Quinsigamond is used extensively by the locals for recreational activities, especially for sailing and rowing races during boating season. Sidewalks on the existing bridge are narrow and cannot accommodate regatta viewers. The new bridge features curb extensions over each pier and seating with a good vantage point of the lake.

Sailboats cannot access both sides of the lake due to the low height of the centre arch. Also, the passage beneath the span is dark and confined due to the dense concrete construction above. The open median and steel construction, as well as increased vertical under-clearance of the new bridge, will allow light, air and a safe passage under the bridge.

MassDOT selected TranSystems as the chief consultant for the initial design of the replacement structure, following the bridge inspection in 2008.

As the design-build contractor, Middlesex Corporation manages the construction of the project and the design-build team. Other members of the team include Fay, Spofford & Thorndike (FST), Jacobs Engineering, TY Lin International, Howard/Stein-Hudson Associates, Green International Affiliates and Illumination Arts.

FST is the lead designer, undertaking the structural and highway design. It is also responsible for the traffic flow, staging and permitting during construction.

The public involvement process was overseen by Howard/Stein-Hudson Associates. Green International Affiliates is in charge of the survey and utilities while Illumination Arts is responsible for the aesthetic bridge lighting.