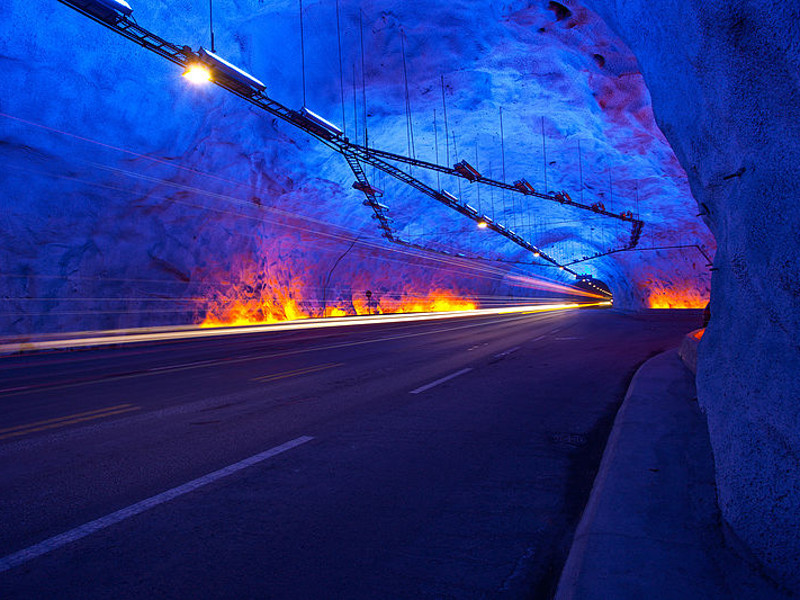 The Laerdal tunnel was opened in 2000. Image courtesy of Svein-Magne Tunli. 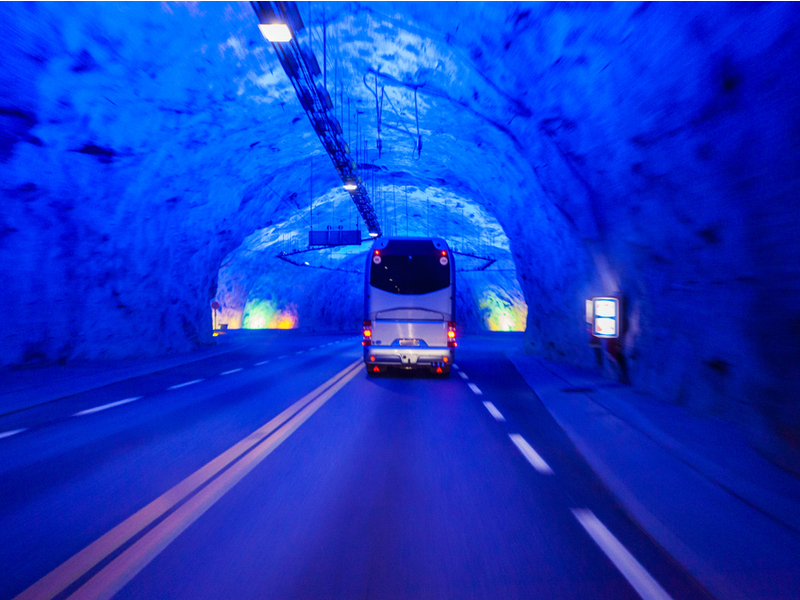 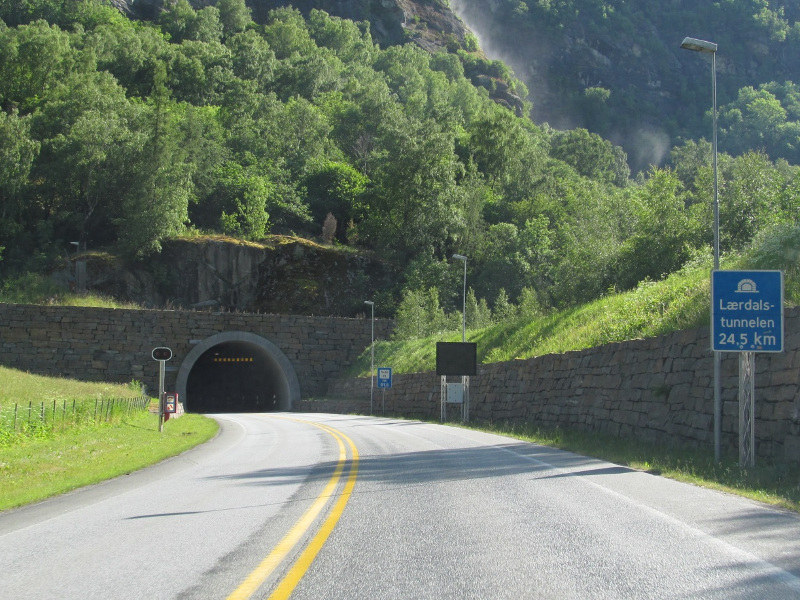 The tunnel is the longest road tunnel in the world. Image courtesy of European Roads.

In June 1992, the Norwegian Parliament decided to construct the world’s longest road tunnel. The 24.5km-long stretch of tunnel stretches between Aurland and Laerdal on the new main highway connecting Oslo and Bergen.

The construction was approved to traverse a section of the country with relatively poor levels of reliability in road transport due to the mountainous area and narrow roads combined with many fjord crossings.

The Laerdal tunnel is an important part of the extension of a ferry-free, reliable road link between the two largest cities in Norway. The decision to build a tunnel rather than refurbish existing roads was taken to avoid difficult terrain with high risks of rock falls. From an environmental perspective, the tunnel was seen as a justifiable investment to avoid destroying sections of the unspoiled natural landscape.

Operations during the construction of Laerdal tunnel was divided into four main phases: drilling, blasting, loading and transport and excavating and landscaping.

Navigation satellites were used to determine fixed survey points on which other measurements inside the tunnel were based. Inside the tunnel, bearings were indicated using laser beams. A computer on the drilling jumbo captured the laser beams and positioned the drilling equipment automatically, according to a set pattern. Each drilling jumbo contained three automatic hydraulic drills.

Blasting was conducted using approximately 100 holes, 45 – 51mm in diameter and 5.2 metres deep, drilled for each blast. A detonator inside a small stick of Anolit dynamite was placed in the bottom of each hole.

Wheel-mounted loaders were used for loading and transport in the tunnel. The excavated materials were transported out of the tunnel using dump trucks. Permanent roads were built in the tunnel, in parallel with the tunnelling work, so that transport vehicles could run on a good, paved road base during the construction period. This improved efficiency and minimised pollution.

The disposal of 2.5 million cubic metres of excavated rock from the tunnel was one of the greatest challenges in planning the tunnel. To avoid major conflicts because of the cultural importance of the landscape and the productive agricultural land in the main valley, the Norwegian Public Roads Administration decided to build more than half of the tunnel from a 2.1km long access tunnel in Tynjadal. Tynjadal is a side valley, opening out about 8km east of the town of Laerdal. Here, the excavated materials were deposited with no visible effect on the main valley, and without any risk of hazardous run-off into the Laerdal watercourses.

The Norwegian Public Roads Administration’s (NPRA) challenge was to design the tunnel so that people did not find the 20-minute-long trip monotonous, thereby losing concentration during the long journey.

A working group led by experienced psychologists at SINTEF (the Industrial and Technological Research Association) worked closely with the NPRA to assess what could be done to make the journey through the tunnel a pleasant experience.

“The disposal of 2.5 million cubic metres of excavated rock from the tunnel was one of the greatest challenges in planning the tunnel.”

Simulators were used to find the best solutions as regards lighting levels and design and gentle curves and short straight sections make driving through the Laerdal tunnel less monotonous, without breaching the guidelines for safe viewing distance.

At any given point in the tunnel, the safe viewing distance is 1,000m or more.

The tunnel includes fire extinguishers at every 125m and 15 turning areas for semi-trailers and buses. Emergency niches are also available at every 500m of the tunnel.

The tunnel is longitudinally ventilated through only one ventilation air exhaust shaft, 18km from the Aurland end of the tunnel. About 10km from the Aurland end of the tunnel, a cleaning plant for the tunnel ventilation air was installed in a short side tunnel. This plant cleans the passing air for critical polluting components, thus maintaining an acceptable air quality throughout the tunnel even during periods of heavy traffic and limiting the air volume and jet from power consumption which is required in order to ventilate the long tunnel.

The air quality in the tunnel is continuously monitored, and the air cleaning system automatically goes into operation when required. The electrostatic precipitator is automatically quenched for de-dusting at regular intervals, while maintenance of the gas filtration catalyst is required only at intervals of several years.

Safety features of the tunnel

A great deal of investment was put into safety measures and equipment in the Laerdal tunnel.

Fire safety was the main priority in the construction of any tunnel. The Laerdal tunnel goes through dry rock with little need for sealing water seepage. In the few places where flammable plastic mats were required for waterproofing, these methods were put to the test in a coach fire in the Ekeberg tunnel in 1996. The heat generation was around 35.000kW, and the temperature below the tunnel roof rose to more than 1000°C with no visible damage occurring to the tunnel cladding.

Even with little risk of accident and safe fire designs, the Laerdal tunnel has a large quantity of emergency equipment. Emergency telephones and fire extinguishers were installed at closer intervals than in other tunnels.

Several million Norwegian kroner were spent on equipment for monitoring and to check that the ventilation systems, radio connections, lightning systems, traffic lights, emergency equipment, etc., are in working order.

The Norwegian Public Roads Administration’s monitoring centre in Laerdal is responsible for monitoring and checking all tunnel systems in the region. The tunnel is reinforced and protected by 200,000 rock bolts for the safety of passengers.

If any fault should occur in the ventilation system or if any queues should form, creating excessive volumes of exhaust fumes, the tunnel will automatically be closed to traffic.

If a traffic accident or some other situation occurs, the tunnel will be closed with immediate effect from the monitoring centre. All drivers who enter the tunnel are given information via radio about whether they should wait or possibly turn round and drive out of the tunnel.

Shortly before the opening of the tunnel a fan caught fire in a bus carrying about 50 people though the tunnel to the ceremony in Laerdal.

The bus filled with smoke, forcing passengers to evacuate while 8 miles inside the mountain. No one was hurt. Passengers reboarded and drove on a few minutes later when smoke dispersed.

Interconsult a member of the Cowi Group was involved as electrification and automation consultant to design all electrical installations in the tunnel.

Interconsult were instrumental in ensuring traffic safety was a key parameter in the design of the technical installations, including lighting designed to give the road user the impression of driving through several shorter tunnels instead of one long by making transition zones in the tunnel with an imitated sky (blue lighting).

Oglaend System supplied 1,600 custom-made supports and LOE cable ladders for the construction of the tunnel.