The country’s vast highway network consists of three categories of roads, namely the interstate highways (Interstates), the US numbered highways (US Routes), and the state highways. The Interstate 90 (I-90), which connects Seattle, Washington, Boston and Massachusetts, spans over 4,990km and is the longest Interstate Highway in the country.

Route 20 (US 20), an east-west highway measuring 5,415km in length, is the longest single road in the country and one of the world’s longest highways.

China has the world’s second-biggest road network, exceeding 4.24 million kilometres (as of 2012 data). National highways and provincial highways respectively comprise 4% and 7% of the Chinese road network. The country’s expressway network, which extends over 96,000km, is the world biggest network of this type.

The national-level expressway system of China, known as the National Trunk Highway System (NTHS), comprises seven radial expressways from the capital city Beijing, nine north-south expressways, and 18 east-west expressways. The 5,700km-long China National Highway 010 (Tongsan Expressway) is one of the ten longest highways in the world.

The Chinese road network has witnessed rapid development in the last decade and the trend is set to continue in future. The country’s 2030 Road Master Plan envisages 5.8 million kilometres of total road network including 400,000km of national highways and over 180,000km of expressways.

India’s road network, which spanned over 4.1 million kilometres by 2012, ranks as the third biggest in the world. The road network is the key transport infrastructure, accounting for 65% of freight and 80% of total passenger traffic in the country.

“India’s road network accounts for 65% of freight and 80% of total passenger traffic in the country.”

The Golden Quadrilateral highway network which spans 5,846km and connects Delhi, Mumbai, Chennai and Kolkata – the four major Indian cities – is one of the biggest highway networks in the world. 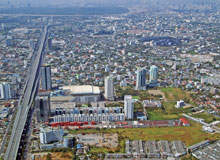 The 4,800km-long BR-101 highway is the longest federal highway in the country, connecting 12 state capitals. The BR-116, a major north-south federal highway, is the second longest, measuring 4,385km.

The Russian road network covers a total length of more than 1.28 million kilometres. The network spanned 927,721km of paved roads including 39,143km of expressways and 355,666km of unpaved roads at the end of 2012.

The Trans-Siberian Highway runs a total length of 11,000km, coincides with European route E30, and passes through Kazakhstan. The longest section of the highway is the Russian route M58 or the Amur Federal Highway that runs 2,100km from Chita to Khabarovsk.

The Japanese road network covers 1.21 million kilometres, a remarkable figure for an island nation. Paved roads constitute 973,000km of the network, whereas the remaining 237,000km of roads are unpaved.

The national expressway network provides an uninterrupted link between Aomori Prefecture and Kagoshima Prefecture. The 679.5km Tohoku Expressway, which links the Tohoku region with the Kanto region as well as the greater Tokyo urban area, is the longest national expressway in the country. The 743.6km National Route 4 that connects Tokyo and Aomori is the longest highway in the country.

The national highway system includes over 38,000km of important national and regional highways. Most of the Canadian highway network is maintained under provincial jurisdiction.

The Trans-Canada Highway, a highway system passing through all ten provinces of Canada, is the only highway network under the federal jurisdiction. The 8,030km-long highway is among the five longest highways in the world.

The motorways, trunk roads and local roads in the country are designated ‘A’, ‘N’ and ‘D’ followed by numbers. The country’s Autoroute system, largely consisting of toll roads, measures over 11,400km, making it one of the biggest European motorway networks.

Australia has the world’s ninth-biggest road network, measuring over 823,000km in length and constituting 356,000km of paved roads and over 466,000km of unpaved roads. The network comprises expressways, national highways and local roads.

The Spanish road network, excluding non-paved roads, spans a total length of over 683,000km and is the tenth biggest network in the world. It consists of 16,205km of expressways, 25,733km of national highways and over 71,000km of regional highways.

The Spanish motorway network is the world’s fifth-biggest, following China, the US, Russia and Canada. The motorways in Spain are known as autopistas and autovías. The country had 2,991km of toll highways and 2,500km of toll motorways as of 2011, managed by concessionaires.