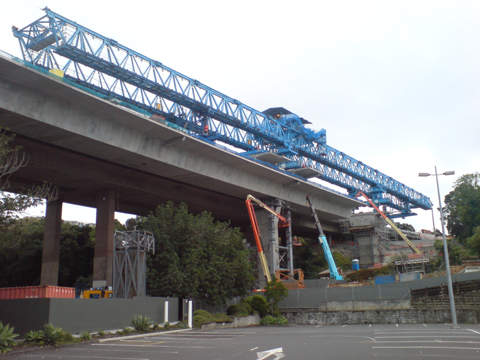 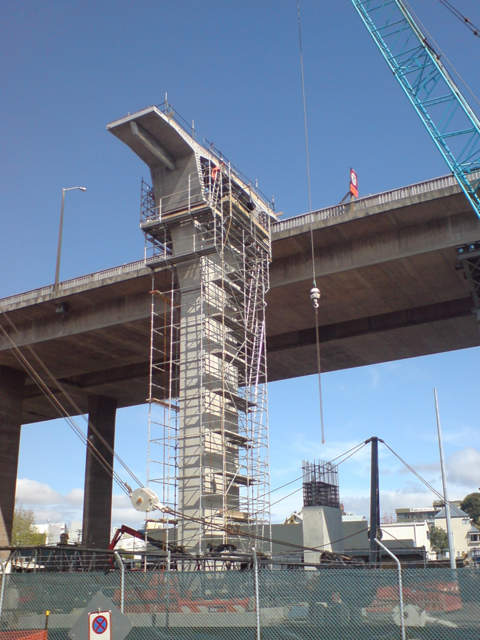 A rising column of the Newmarket Viaduct replacement, seen in the mid 2009. 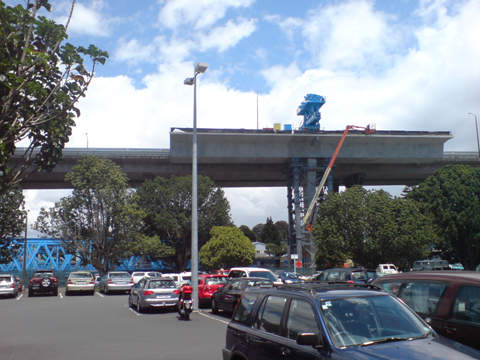 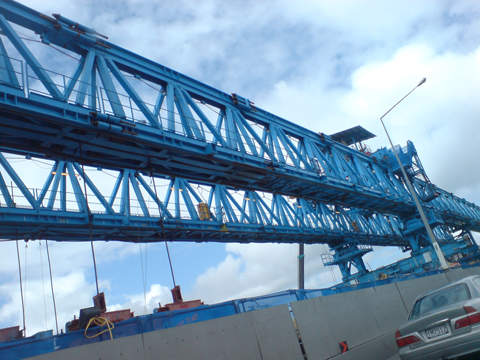 The 'big blue' gantry crane over the Newmarket Viaduct. 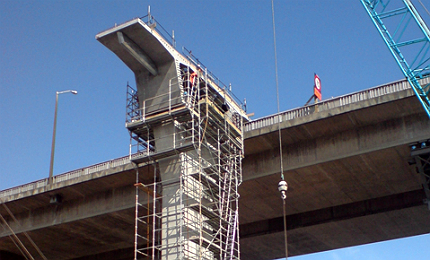 The Newmarket Viaduct in Auckland is the busiest stretch of motorway in New Zealand. It was built in the mid 1960s under the Auckland urban motorways project. The concerns about its inability to comply with earthquake standards and to cater to the increasing traffic have called for the expansion of the viaduct.

As the Newmarket Viaduct was unable to be widened, a complete deconstruction and replacement of the viaduct was opted for as a solution. The viaduct was replaced with a new wider structure by March 2013. The three-lane eastern southbound section was opened for traffic in September 2010.

“As the Newmarket Viaduct was unable to be widened, a complete deconstruction and replacement of the viaduct was opted for.”

The $244m Newmarket connection project was a four-stage replacement for the Newmarket Viaduct (motorway flyover). It was funded by the New Zealand Transport Agency. The project began in June 2009 and was completed by March 2013.

Stage four involved the demolition of the old northbound sections and relocation of the northbound traffic to a new three-lane structure.

The project also includes realignment of the on/off-ramps and urban design and landscaping initiatives at Newmarket. It also improved pedestrian links around the area.

The new northbound section has not been widened for many reasons. One of the main reasons is to avoid congestion into the upgraded Spaghetti Junction (CMJ). Another reason is that the northbound section carries less traffic than the southbound and it is not necessary to widen the section, as the bridge itself does not cause congestion in comparison with the southbound.

Widening of the southbound section of the roadway will reduce the congestion at one section but will transfer that congestion to northbound section, thus offering fewer benefits from the project.

“The $244m Newmarket connection project was a four-stage replacement for the Newmarket Viaduct (motorway flyover).”

Temporary bracing was installed to support the remaining viaduct once half of it is removed, in order to withstand the extra loads inherent in the deconstruction process. The bracing not only acted as a support, but also improved the seismic stability of the existing structure for the balance of its useful life. An overhead launching gantry of 800t was used in the construction and deconstruction activity.

The new bridge was constructed by precast match-cast segmental balanced cantilever method which involved placing of bridge decks equally either side of the columns until they met in the middle. No adjacent columns were provided at the two ends, and spans were completed by using temporary supports.

The new viaduct bridge includes 468 bridge segments and 24 (two×12) columns. The segments look identical but each one is uniquely designed for its specific position. Each segment weighing approximately 80t was built in pre-cast yard at East Tamaki and transported to the site. The balance supports consisting of more than 90t of steel and concrete were installed around each column to address temporary imbalances during the construction. Approximately 4,200t of reinforced steel and 30,000m³ of concrete was used in the construction.

Beca-Opus was appointed by The New Zealand Transport Agency (NZTA) to conduct environmental assessments and obtain necessary approvals for the project.

The Central Motorway Junction project in New Zealand will link the Northern Motorway to Auckland’s port and North-Western Motorway.

The Te Wero Bridge in Auckland, New Zealand, will form an important component of the Western Reclamation project.