The governments of Kentucky, Indiana and Louisville
Expand 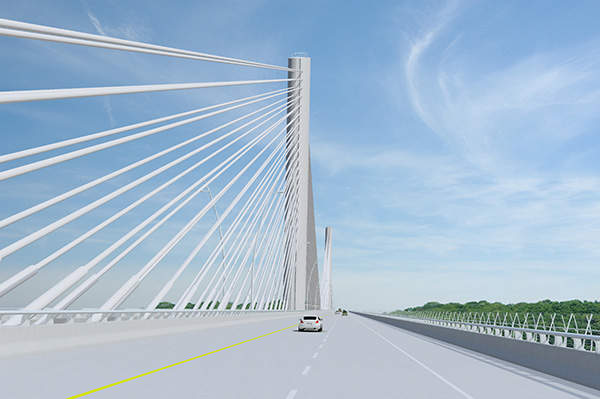 The Downtown Bridge will be a three-tower cable-suspended bridge. 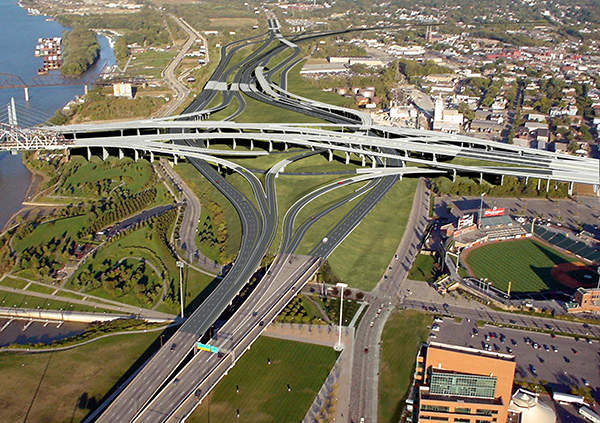 The East End Bridge will have two centre towers and will be suspended by cables.

The cost of the construction will be saved by rebuilding the Kennedy Interchange or Spaghetti Junction in its original location. 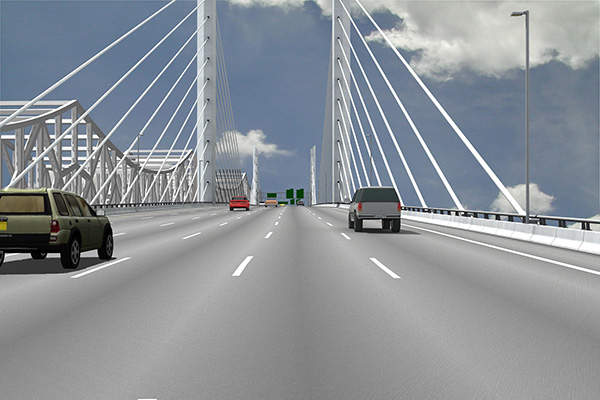 A view of the East End Bridge from the Indiana shoreline. 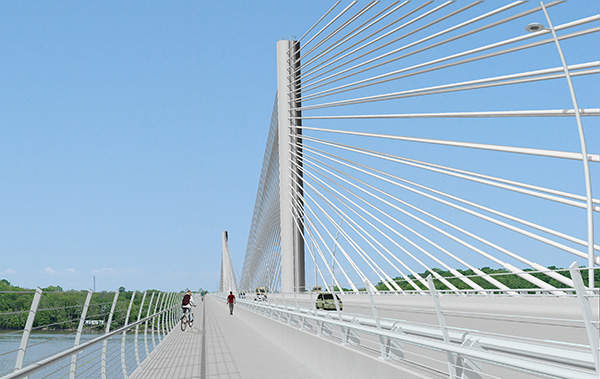 The Downtown Bridge or crossing will be designed, financed and constructed by the Kentucky Government. 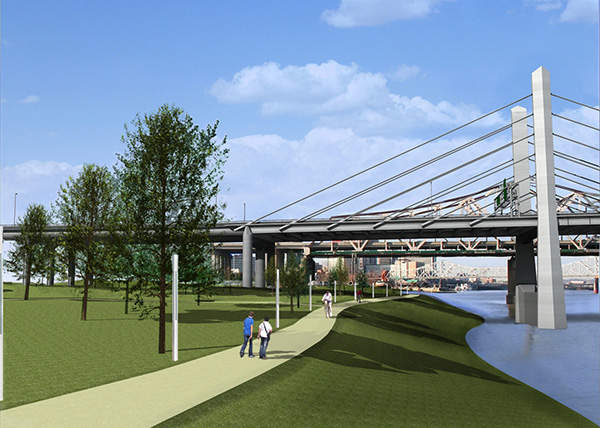 The project will consist of bicycle and pedestrian lanes, as originally proposed in 2003. 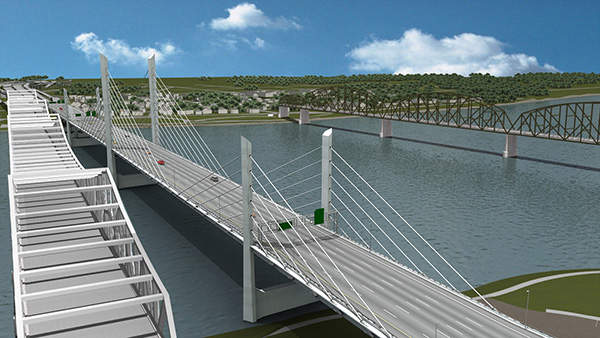 The designer's vision of how the Downtown Bridge will look from the waterfront park once built. 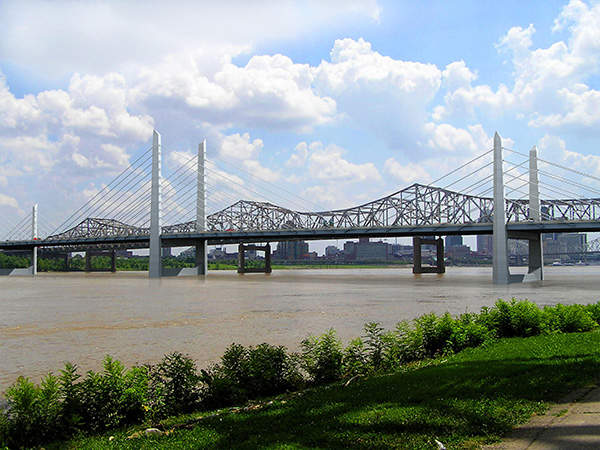 The East End Bridge will link the states of Kentucky and Indiana.

The project was approved by the federal authorities in June 2012. It was originally estimated to cost $4.1bn but later revised to $2.6bn. The cost savings will be achieved by rebuilding the Kennedy Interchange at its original location, making the access to Interchange 65 less complex and reducing the lanes on the East End Bridge from six to four.

The Indiana government will take charge of designing, constructing and financing the East End Bridge. The Downtown Bridge construction will be undertaken by the Kentucky Government. Project bidders will be selected by the end of 2012 and construction will start thereafter.

“The purpose of the project is to represent the states of Kentucky and Indiana as a single force.”

The purpose of the project is to represent the states of Kentucky and Indiana as a single force. The bridges will serve as a passage of transportation into the country, which will benefit local travellers and highway users alike, well as provide a cost-effective method of travel.

The bridges will offer better access to the River Ridge commercial centre, located in the Jefferson County in Kentucky. The reconstructed Kennedy Interchange will link the Interstates 64, 65 and 71, easing traffic and reducing air pollution.

The bridge selection process ended in 2006 after 18 months of discussions. A three-tower cable bridge was selected for the Downtown Bridge, while a median-towered centre cable suspended bridge was finalised for the East-End Bridge.

The financing and the construction of the Ohio River Bridges Project will be undertaken by an independent bi-state government agency, organised by the Governments of Kentucky and Indiana. In 2011 an industry exhibition was organised jointly by the Kentucky and Indiana transportation departments to demonstrate the creative inputs that will be used to build the Ohio River Bridges project.

The Kennedy Interchange will be rebuilt in its original location. This will prevent the transfer of big electrical transmission lines, use less land space, avoid sharp turns, make way for the construction of entry and exit ramps in Interstate-64 and reduce the speed of traffic to 45mph during rush hour. The existing Kennedy Bridge will accommodate the southbound I-65 traffic.

Improvements on the Kennedy Interchange include the elimination of present ramps and tight weave pattern, reduction of roadway piers, a 40-acre green space for the Downtown development corporation, extension of the Clay and Campbell streets to include the River Ridge road, a partial interchange at Frankfort Avenue and the extension of Witherspoon to allow better connectivity. The improvements will allow an access to the Butchertown Historic District.

The Maysville Bridge, also known as the William H Harsha Bridge, is a cable stayed bridge located between Maysville, KY, and Aberdeen, OH. It forms a connection between Kentucky and Ohio over the Ohio River.

Work will also include the replacement of numerous flyover ramps with low-cost traditional ramps to keep the construction process simple and maintain traffic during construction.

The Bi-State agency shortlisted the median-tower cable-suspended centre cable design to build the future East-End Bridge. The six-lane bridge will include a 17ft bicycle-pedestrian path w on the west. The East End Bridge will link the Gene Snyder Freeway in Kentucky with Lee Hamilton Highway in Indiana, helping to complete the Interstate 265 loop around the Louisville-Southern Indiana metro area.

The East-End Bridge will comprise two 300ft towers rising from the centre of the bridge with cables stretching to the roadway median. The two 12ft shoulders will taper down 8ft to 9ft near the towers. The Drumanard Estate can be accessed through a tunnel.

Bids from three bridge and road building professionals were shortlisted for the construction of the Interstate 65 Bridge and the interstate connections in Kentucky and South Indiana. The teams include Ohio River Transportation Contractors, which is a joint venture of Kiewit Infrastructure, Traylor Brothers, Kokosing Construction and Massman Construction; The Walsh Construction; and Skanska, Flaitron, Dragados USA.

“The project is expected to reduce the emission of pollutants by 47%, as well as handle more traffic without affecting the air-pollution levels.”

The final winners will be announced by the end of 2012.

The project is expected to reduce the emission of pollutants by 47%, as well as handle more traffic without affecting the air-pollution levels. Construction work will also be conducted using environmentalluy friendly methods.