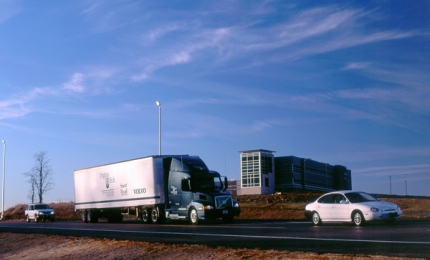 Virginia’s Smart Road is a 5.7-mile (9.17km) limited-access highway being jointly developed by Virginia Department of Transportation and Virginia Tech Transportation Institute (VTTI) in Montgomery County of Virginia, US.

It will be a four-lane highway connecting Blacksburg, the home for VTTI, with the Interstate 81, while also acting as a research lab for testing new transportation technologies.

“The 175ft-tall Smart Road Bridge was completed in May 2001 at a cost of $17.4m and is currently the tallest bridge in Virginia.”

The smart road project broke ground in July 1997 and has so far delivered two miles of the two-lane roadway, which was built over two phases. Construction of the final phase of the project, which will extend the road by 3.7 miles to connect the Interstate 81 and convert the entire 5.7-mile road into a four-lane roadway, is yet to be launched and scheduled.

The entire project is expected to be completed after 2015.

The first phase construction involving a 1.7 mile (2.73km) double-lane segment was completed in December 1999. The second phase construction involving a 2,000ft long and 40ft wide new bridge, called Smart Road Bridge, as well as 200 yards of roadway crossing Route 723, was completed in 2002, bringing the total length of the smart road to 2.2 miles (3.54km).

The 175ft-tall Smart Road Bridge was completed in May 2001 at a cost of $17.4m and is currently the tallest bridge in Virginia, surpassing the 157ft Varina-Enon Bridge over the James River in Henrico County. It is also the only bridge in Virginia to use a cast-in-place box girder bridge design with cast-in-place segments and concrete-embedded, post-tensioned steel cable.

When complete, the Smart Road project will provide direct route for the motorists travelling from Blacksburg to I-81. It will allow the researchers and product developers to test new transportation technologies and has a number of innovative features.

It has 75 weather-making towers specifically designed to produce rain, snow and fog. A 500,000gal water tank was installed for supplying water to the towers for creating a selected weather across a 0.5-mile stretch of roadway.

The road is monitored using an advanced communications system featuring a local-area wireless network interfaced with a fibre-optic backbone. Signal phasing and timing (SPaT) will be carried out using remote controls.

The VTTI’s facilities allow researchers to study driving in both controlled environments with the weather-making capabilities of the Smart Road and also on uncontrolled, natural environments.

The Smart Road is controlled and maintained from the control centre located at the western end of the road. The control centre communicates with test vehicles, as well as monitors and controls the pavement sensors, power grids, surveillance cameras, weather generation, lighting and overhead message signs.

Avar Constructions conducted the post tensioning works and supplied the form-travellers for the bridge project. Vecellio & Grogan was awarded the contract for the first phase construction works.