Verrazano-Narrows Bridge, located at the mouth of upper New York Bay, is the longest suspension bridge in the US. It is a double-decker suspension bridge with six lanes per deck. It is named after Giovanni di Verrazano, the first explorer to sail into the New York Harbour and the east coast of North America in 1524.

The tolled bridge links Brooklyn with Staten Island, and has a central span of 1,298.4m. Its overall length is 4,175.8m. The City of New York owns the bridge and MTA Bridges and Tunnels is the operator.

The bridge was designed by Othmar H. Ammann and constructed from 1959 to 1964. It was opened to traffic in November 1964. The two towers of the bridge utilised 26,000t of steel. Up to 13,000 people were involved in the construction. The construction cost amounted to $320.1m.

The bridge has an overall length of 2,737m, comprising of six lanes including three northbound and three southbound. It has two towers weighing approximately 44,000t.

Mackinac Bridge located on Interstate 75 in northern Michigan is the third longest suspension bridge in the US. It spans the Straits of Mackinac and connects the Mackinaw and St. Ignace cities. It consists of four lines with a central span of 1,158m and overall length of 8,038m.

The bridge was designed by Dr. David B. Steinman. The foundation works were carried out by Merritt-Chapman & Scott Corporation and construction was carried out by The American Bridge Division of United States Steel Corporation.

Construction works started in May 1954 and involved approximately 11,000 workers and 350 engineers. The construction cost amounted to $99.8m. Traffic operations were started in November 1957. Mackinac Bridge Authority takes care of the operation and maintenance of the bridge.

George Washington Bridge, spanning the Hudson River, links the cities of New York and New Jersey. It forms part of the US Interstate I-95 highway and is the fourth longest suspension bridge in the US. The main span of the bridge is 1,067m, whereas the overall length is 1,450m. The Port Authority of New York and New Jersey is responsible for operation and maintenance of the bridge. 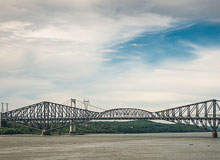 The bridge comprises of 14 lanes, including eight on the upper deck and six on the lower deck. Othmar H. Ammann provided the design, while Cass Gilbert served as the architect. Construction commenced in 1927, the bridge’s upper level was opened to traffic in 1931 and the lower deck was opened in 1962.

A rehabilitation project worth $199m to repair the bridge’s upper level structural steel deck is currently underway and will be realised by 2015.

Tacoma Narrows Bridge comprises of a set of two suspension bridges spanning the Tacoma Narrows Strait of Puget Sound in Pierce County, Washington. The bridge links the city of Tacoma to the Kitsap Peninsula. It is currently the fifth longest suspension bridge in the US, with a central span of 853.44m and overall length of 1,822.4m.

The bridge originally opened in 1940 but collapsed in the same year due to heavy winds. Construction of the existing bridge (westbound), to replace the collapsed one, was started in 1948 and completed in 1950. The second bridge (eastbound) was commissioned in July 2007.

The new eastbound bridge was built by Tacoma Narrows Constructors, a joint venture (JV) of Bechtel Infrastructure and Kiewit Pacific. The twin bridges feature four traffic lanes each and are maintained by the Washington State Department of Transportation (WSDOT).

Carquinez Bridge, which is the common name given to the parallel bridges spanning the Carquinez Strait in California, connects San Francisco and Sacramento. It is a suspension bridge opened in 2003 as a replacement to the original bridge, which came into existence in 1927. It has a main span of 730m, ranking as the sixth longest suspension bridge in the US.

The westbound bridge, Alfred Zampa Memorial Bridge, is named after an iron worker who was involved in constructing the original 1927 Carquinez Bridge, the parallel eastbound span in 1958 and four other Bay Area toll bridges. It was constructed by a JV comprising of Flatiron Structures, FCI Constructors and Cleveland Bridge & Engineering Company.

The eastbound bridge comprises of four lanes and was retrofitted from 1998 to August 2001 by Balfour Beatty. Caltrans is responsible for the operation and maintenance of the two bridges.

San Francisco-Oakland Bay Bridge, spanning San Francisco Bay in California, comprises of two interconnected double-deck bridges, forming part of the Interstate 80 (I-80). The western section of the bridge has a main span of 704m, making it the seventh longest suspension bridge in the US.

The bridge opened to traffic in 1936, after nearly three years of construction. Charles H. Purcell was the chief engineer for the project, while Ralph Modjeski was the designer. The western span of the bridge was retrofitted in 2004. The original eastern span of the bridge that was damaged during the 1989 Loma Prieta earthquake was replaced in 2013.

Bronx-Whitestone Bridge, spanning the East River, links the boroughs of Queens on Long Island and The Bronx. It has a central span of 701.04m and total length of 1,149.1m, standing as the eighth longest suspension bridge in the US. It is maintained by MTA Bridges and Tunnels.

Othmar H. Ammann was the chief engineer for the bridge, while Allston Dana provided the design. Construction started in June 1937 and took less than two years to complete.

The bridge currently carries six lanes of Interstate 678. Six more lanes will be added upon completion of a major upgrade currently being carried out by a JV comprising EE Cruz and Tully Construction.

Delaware Memorial Bridge, which serves Interstate 295 and US Route 40, connects Delaware and New Jersey. The twin suspension bridges, built over the Delaware River, currently rank as the ninth longest in the US. Main span of the bridges is 655.32m, where as the overall length is 1,112.5m.

Delaware River and Bay Authority operates the twin bridges. Construction works for the first span (northbound) commenced in February 1949 and took more than two years to complete. Works on the second span (southbound) were started in 1964 and completed in 1968.

Walt Whitman Bridge, spanning the Delaware River, connects the cities of Philadelphia and Gloucester. It forms part of the Interstate 76 and is the tenth longest suspension bridge in the US. The central span and overall length of the bridge are 609.60m and 3,652m respectively.

The suspension bridge was designed by Othmar H. Ammann. Construction commenced in August 1953 and was completed in approximately four years. The bridge opened to traffic in May 1957. Delaware River Port Authority of Pennsylvania and New Jersey operates the bridge.

The bridge features seven lanes and carries approximately 140,000 vehicles a day. American Bridge Company is currently replacing the deck of the bridge as part of a major project, dubbed Deck the Wall. The deck replacement is scheduled for completion in January 2014.

Norway, which is considered the world’s leader in tunnelling, has a whopping 900 tunnels, including the world’s longest road tunnel.

With more than ten million visitors expected at the 2012 Olympic Games, should Londoners expect an increase in air pollution levels?