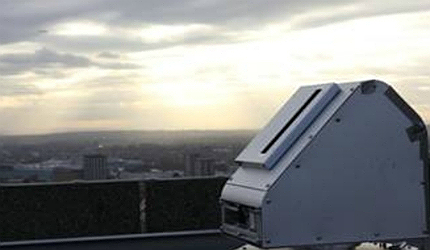 Transport commissioner for London Peter Hendy released a paper this year, called ‘Hosting a great Games and keeping London moving this summer’, which revealed that a total of 11 million spectators were expected to attend London’s 2012 Olympic Games.

"To measure the impact that London’s 2012 Olympic Games is going to have on pollution, the University of Leicester is planning to deploy three CityScan scanners."

Its research explained how most of London’s road network would be unaffected by the event and that all spectators would be expected to take public transport, walk or cycle. In addition, extra buses and train services are to be laid on to accommodate the additional demand – such as the 100,000 visitors expected at the opening ceremony.

Conversely, Inrix’s transport report – Summer Traffic Predictions – predicts a rise in congestion levels of 33% (reducing traffic speeds on core network routes to just 12mph) and journeys through hotspots to increase by 25% – with those on core routes taking up to a third longer.

However, the report was criticised in the national press by TfL – despite three million car journeys being anticipated on the busiest day – who said the report did not take into account its six years of planning for London 2012.

"It is unclear how Inrix has reached the conclusion that congestion will increase on the Olympic Route Network during Games time, when the purpose of the ORN is to achieve reliable journey times and improved traffic flow," Garrett Emmerson, TfL’s chief operating officer for Surface Transport, told the BBC earlier in 2012.

More congestion means more air pollutants, such as nitrogen dioxide (NO2), in the air, which can decrease lung function and increase the risk of respiratory illnesses, including bronchitis and asthma.

A study of air pollution taken during the 2008 Beijing Olympics, released in May 2012 in the Journal of the American Medical Association, found that the increased levels of air pollution drove up blood pressure and blood-clotting factors.

To measure the impact that London’s 2012 Olympic Games is going to have on pollution, the University of Leicester is planning to deploy three CityScan scanners, as part of the NERC funded ClearfLo (Clean Air for London) experiment, where 3D mapping of nitrogen dioxide concentrations will be carried out.

CityScan technology can be thought of as a pollution radar and is highly accurate – especially compared with existing technology which can only produce readings in hotspot locations, using technology such as NOx boxes, which are chemiluminescent measurements of NOx.

"The university team hope the CityScan trial results will be used as part of the iTRAQ system (intelligent traffic management system)."

The CityScan instruments gather scattered sunlight and take readings of air quality to assess how much it increases as a result of the additional traffic emissions. Each unit can provide coverage for 25 square kilometres and give readings for specific areas, such as individual roads, playgrounds and buildings. They will be able to show at what days and times the pollution levels are the highest.

"We will be able to map the pollution in 3D to show emissions of nitrogen dioxide and how far they spread," said Dr Roland Leigh, member of the university’s Earth Observation Science Group.

"Between two or three CityScan instruments, we can map out a complete urban area and tell you where the nitrogen dioxide is in that space. CityScan makes the link between emissions and poor air quality downwind, enabling better management of the respiratory health of sensitive individuals."

CityScan scanners are the product of CompAQS’s spectrometer development and the original spectrometer was designed for geostationary satellites, although it had not been demonstrated practically prior to this.

However, during 2011, two new CompAQS spectrometers were constructed and configured for use as ground-based Differential Optical Absorption Spectroscopy (DOAS) systems by the University of Leicester, in collaboration with partners at Surrey Satellite Technology Ltd.

CityScan scanners are mounted on a high fidelity positioning and movement system, have a variable field of view shutter system and have been prepared for outdoor operations – they also contain weather-proofed connectors for easy deployment.

They have a wavelength range from 420-630nm, can rotate 360 degrees every 15 minutes and contain two onboard CPUs to capture data: NO2 in scattered sunlight in 180,000 different directions throughout every 360-degree rotation.

"There are 500 DOAS (differential optical absorption spectroscopy) retrievals that can be performed on each instantaneous measurement, with novel retrieval algorithms explored to ensure near real-time operation," said Professor Paul Monks from the Department of Chemistry and part of the CityScan team.

"The CityScan instruments gather scattered sunlight and take readings of air quality to assess how much it increases as a result of the additional traffic emissions."

According to Monks, the CityScan team are hoping to obtain "quantitative information about the relationship between traffic and air pollution in London and its relation to traffic patterns before, during and after the Olympics".

However, despite Inrix’s report suggesting congestion was going to increase – and in line with TfL’s prediction that traffic flow would be managed effectively – Monks believes the CityScan trial may show a reduction in air pollution.

"During the Olympics people will rely on public transport systems more than ever throughout London, so as a result we are actually expecting air pollution levels to decrease in some areas," said Monks.

The university team hope the CityScan trial results will be used as part of the iTRAQ system (intelligent traffic management system). Still in its early development, iTRAQ (a partnership between AstriumGeo, De Montfort University, Leicester City Council and the Air Quality Group in Leicester) is the development of a dynamic traffic management system to optimise use of the road network, where air quality will impact traffic flow restrictions so that high standards of air quality can be sustained in the long term in urban environments.