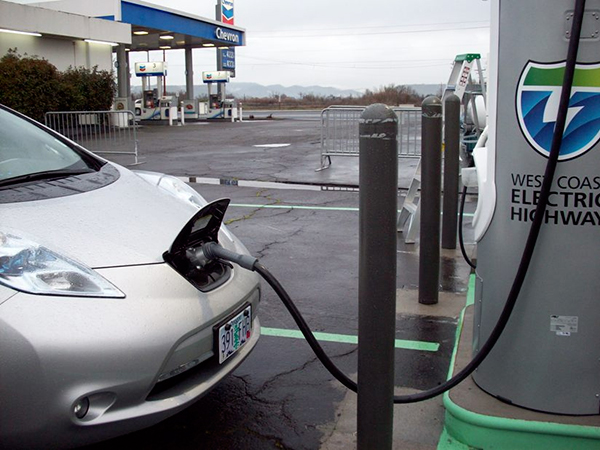 The fast charger allows full recharge of the EV vehicles in about 30 minutes. Image courtesy of Oregon Department of Transportation. 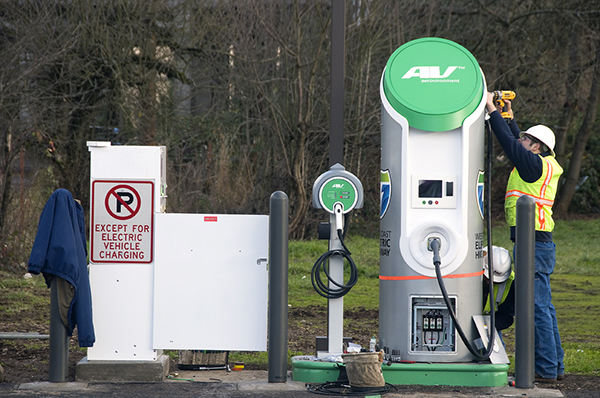 Engineers completing the construction of a charging station along the West Coast Highway. Image courtesy of Oregon Department of Transportation.

West Coast Electric Highway (WCEH) is a network of electric vehicle (EV) charging stations being developed along the Interstate-5 (I-5) in the US. The 1,350mi I-5 highway runs from British Columbia, Canada to Baja California, Mexico. The I-5 West Coast Green Highway project is expected to benefit about two million EV car users by 2020.

The WCEH is a combined initiative of the US State Departments of Transportation (DOT) of California, Washington and Oregon states, along with Canada’s province of British Columbia. The DC fast charging stations infrastructure along the I-5 electric highway corridor will enable the EV users to travel on electric power without relying on petrol.

It will provide a reliable means of electric refuelling and significantly reduce emissions. The public private partnership project also involves participation from the existing businesses along the corridor, travellers, emerging technologies and fuel stations.

“The I-5 West Coast Green Highway project is expected to benefit about two million EV car users by 2020.”

WCEH is part of a $230m EV Project undertaken by the US Department of Energy to promote the use of oil and pollution free electrical vehicles. Oregon, California and Washington are among the participating states. General Motors / Chevrolet and Nissan plan to roll out 8,300 electric vehicles as part of the EV Project.

WCEH is one of the six corridors selected by the US Department of Transportation for the Corridor of the Future programme to reduce congestion and improve the efficiency of freight transportation.

The official signing for the Electric Highway project was signed by the beneficiary states in 2009. In 2010, Oregon committed to installing charging stations across the highway. About 1,100 plug-in electric vehicles are operational in the state.

Tennessee had already installed charging stations along the interstates totalling 435mi. The stations form the first electric highway network in the US, and were installed by restaurants of Cracker Barrel Old Country Store.

The West Coast Electric Highway will have about 100 EV DC fast-charging stations along the I-5 by December 2012. They will be installed at highly travelled corridors and main locations of large travel destinations. The stations will be located at every 40-60mi and be publicly accessible.

Installation of the stations on the I-5 stretch in south Oregon was completed and opened to public in March 2012. The 160mi long stretch on the I-5 in Oregon has been installed with eight electric vehicle charging stations under the first phase of the project. The EV stations are situated at every 25mi.

Stations are located in Cottage Grove, Ashland, Wolf Creek, Rice Hill, Canyonville, Central Point, Cottage Grove, Roseburg and Grants Pass. Two more stations will be set up along the northern Cottage Grove, of the total 22 planned in the state.

DC fast chargers will also be installed along 550mi of the I-5 highway from the Californian border to Canada by the end of the year. The stations are located at retail locations such as fuelling stations, shopping malls and restaurants along the highway.

AeroVironment manufactures, installs and will operate and maintain the EV charging stations. They are installed close to retail areas, gas stations, shopping malls and travel centres along the highway for easy access. The electrical charging infrastructure was earlier limited to offices and homes.

“A major part of the funding for the project came through the American Recovery and Reinvestment Act.”

Each EV charging station has two chargers – a DC fast charger (level three charger) and a level two medium-speed charger. The DC fast-charging station enables electric vehicles such as Mitsubishi i-MiEV and Nissan Leaf to recharge in about 30 minutes. The level two medium-speed charging pedestal can be plugged-in for use with Chevy Volt and Ford Focus cars. It takes about four to six hours for a full recharge and is more economical than the fast charger.

The EV drivers can get information on the charging station locations along the electric highway by registering through AV Charging Network. An electronic key fob and RFID card provided for the EV drivers signed up with the charging programme of AeroVironment, allow them to charge the vehicles around the clock. The location of charging stations can be found through car software and smartphones.

The electrical motors of the cars convert about 85% of the chemical energy in batteries into power and transmit to wheels. On the other hand, only 20% of the energy stored in gasoline is transferred to wheels from the internal combustion engines of the conventional cars.

Funding the WCEH project along Interstate-5 (I-5)

A major part of the funding for the project came through the American Recovery and Reinvestment Act. Initial funding of $1.32m was received from the US Department of Energy through the State Energy Program (SEP). About $185,000 was provided for expansion of the electric highway on the I-90.

The Oregon Department of Energy funded about $915,000 towards the project. The estimated cost of $4m for the second phase will be funded by the US Department of Transportation and Washington and Oregon. The project will also be feasible due to contributions from drivers of the vehicles, public agencies and private businesses.