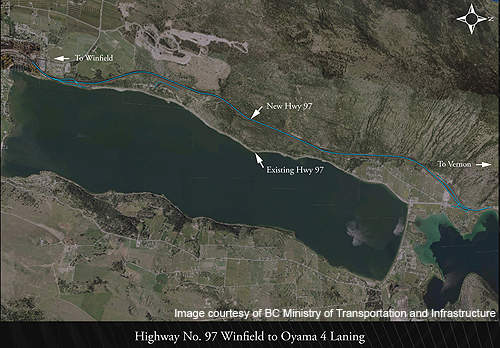 The highway 97 realignment project between Winfield and Oyama along Wood Lake began in July 2011. 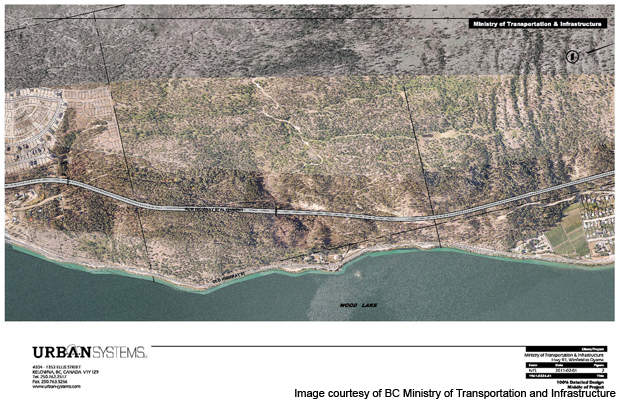 The project is located in Lake Country District of British Columbia, Canada, and improves trade and tourism links. 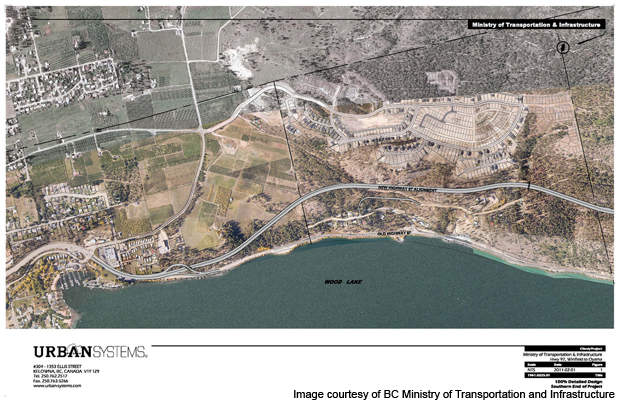 Daily traffic during warmer seasons can reach levels of more than 26,000 vehicles. The number of vehicles is expected to jump to 35,000 a day by 2035.

The Highway 97 realignment project between Winfield and Oyama along Wood Lake began in July 2011. Located in Lake Country District of British Columbia (BC), Canada, the project included construction of a new 9km-long, four-lane highway, which was opened in August 2013.

The Winfield to Oyama portion of Highway 97 is a notoriously accident-prone section. It was therefore decided to realign the highway section in order to improve the safety and reduce travel times along the route.

The realignment improves trade and tourism along the length of the section. The project is managed by BC Ministry of Transportation and Infrastructure.

It is estimated about 22,000 vehicles a day will use the realigned section of the highway, and daily traffic in warmer seasons can reach levels of more than 26,000 vehicles.

The number of vehicles passing the highway is expected to jump to 35,000 a day by 2035. Highway 97 is the longest provincial highway in Canada, and runs from Osoyoos in the south to Yukon in the north.

“Winfield to Oyama portion of Highway 97 is a notoriously accident-prone section.”

In November 2007, the BC provincial government and the Government of Canada agreed to initiate infrastructure projects under the Building Canada plan to be executed from 2007 to 2014.

The projects were estimated to cost up to $2.2bn. In July 2008, they agreed to launch infrastructure projects under the Building Canada plan in smaller communities too.

The C$77.9m ($81.39m) Winfield to Oyama realignment project was approved by the Canadian Government under the Building Canada plan.

The realignment project involved removing the two-lane section from Westbank to Vernon and construction of a 9km-long, four-lane alignment west of the existing highway.

The realignment provides safety and increases the corridor capacity, addresses reliability and mobility issues, reduces delays in travel time and increases the speed on the section from the existing 80km/h to 100km/h, and provides controlled access and limits the conflict points. The Wood Lake fishery also benefits from the project.

BC Ministry of Transportation and Infrastructure conducted environmental studies three years before the beginning of the construction process. These studies are imperative for evolving design and construction.

In December 2010, the Canadian Environment Assessment Agency gave its final decision based on the screening report submitted by BC Ministry of Transportation. The agency is of the opinion that the project will not cause any significant environmental effects.

After the completion of the project in 2013, the ownership of private driveways and accesses along Wood Lake was transferred to District Lake Country.

Contractors involved in the Winfield to Oyama realignment

In March 2011, a $40.8m construction contract was awarded to Windley Contracting of Nanaimo. The company prepared an environment management plan, which identified sensitive areas such as moving deer, relocation of reptiles and active bird nests.

The project received federal environmental approval in February 2011. The ground-breaking ceremony was held on 8 July 2011.

“It is estimated about 22,000 vehicles a day will use the section.”

The construction included two overpasses at south and north ends to realign the road on highway 97 at Evans Road in Oyama and Oceola Road in Winfield.

During the construction phase, traffic on the highway was not effected, as much of the new construction is away from the present highway.