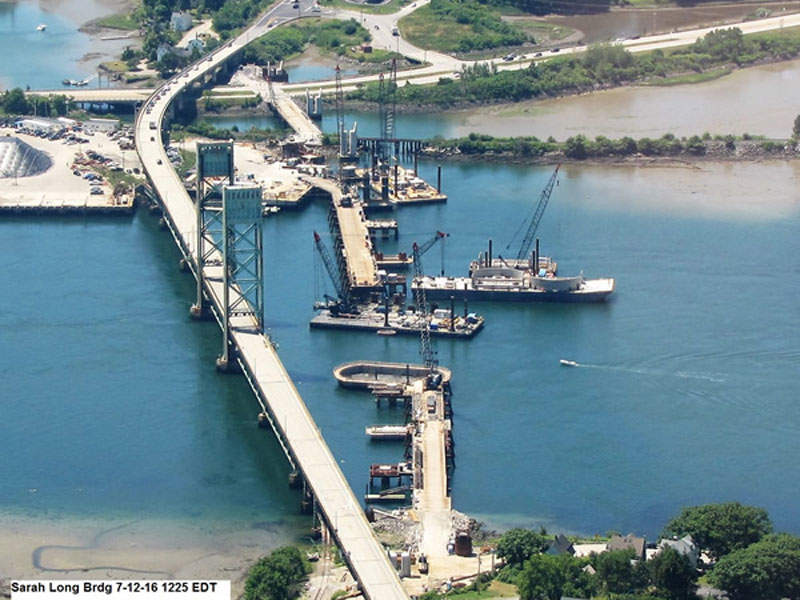 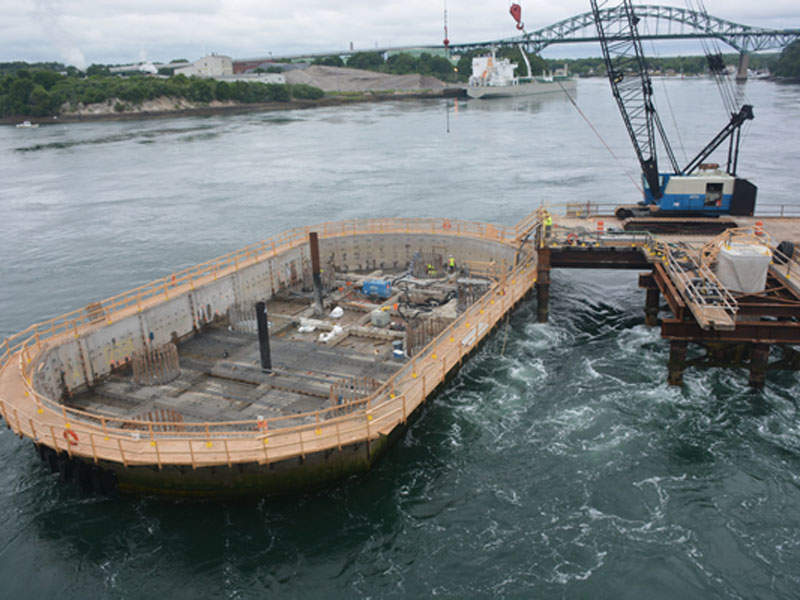 Two trestle structures are being used for the construction of the replacement bridge towers. Credit: www.maine.gov. 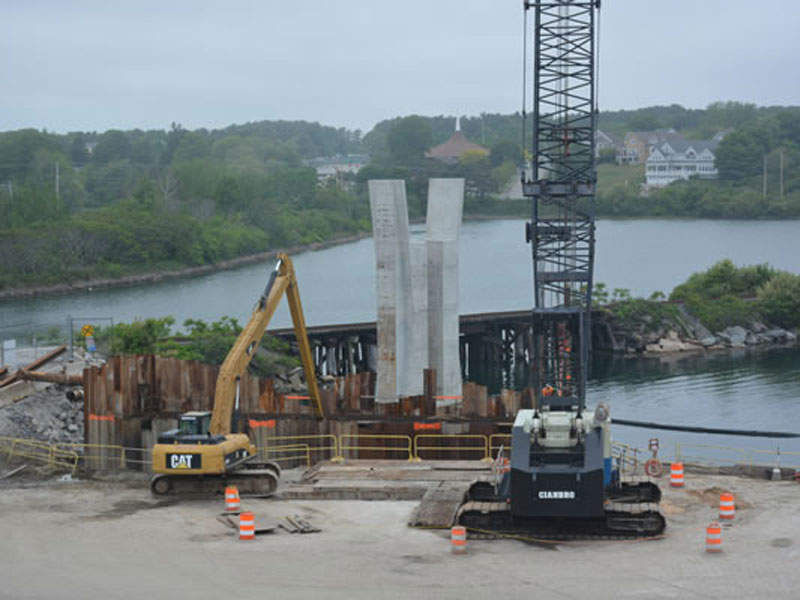 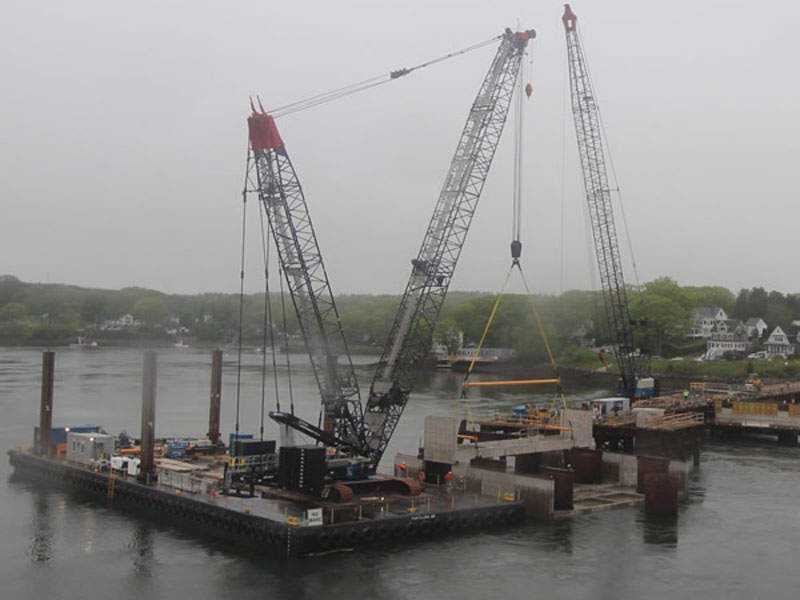 Seven 250t cranes are being used for the construction of the bridge. Credit: www.maine.gov. 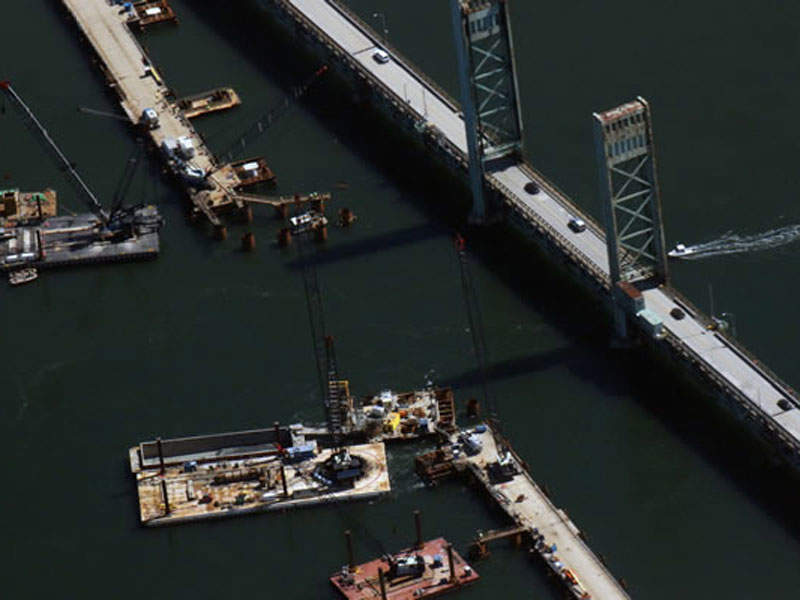 The bridge is expected to be opened for traffic in September 2017. Credit: www.maine.gov.

Sarah Mildred Long (SML) bridge, also known as the Maine-New Hampshire bridge, carries the US 1 bypass over the Piscataqua River and connects New Hampshire with Maine. The bridge was constructed in 1940.

Construction on a replacement for the SML bridge began in January 2015. The $170m bridge replacement project is being developed by the Maine and New Hampshire Departments of Transportation.

The new bridge is scheduled for completion by June 2018, following which the existing bridge will be removed. Traffic will be detoured to the Piscataqua River Bridge on I-95 during the construction phase.

The SML bridge is used as an alternative route in the event of traffic disruption on the Interstate 95 bridge. The narrow passage of the bridge made replacement essential to allow larger vessels to pass through.

In co-operation with the State of Maine, the State of New Hampshire proposed to replace the existing SML bridge with a new vertical lift bridge. The design process for the bridge replacement began in 2013.

Design and features of the replacement bridge over Piscataqua River

The new bridge will have an upper section for vehicular and pedestrian access, and a lower section for railroad service. It will feature a single-level, 300ft-long lift span supported by four separate 200ft-tall precast concrete lift towers.

The lift span of the bridge consists of steel boxes with a fibre-reinforced polymer (FRP) wind fairing. Construction of the lift span towers of the bridge will be completed using pre-cast post-tensioned concrete.

The bridge will have a 56ft vertical clearance in the resting position. Its alignment will improve marine navigation by allowing larger ships to enter the port and shipyard. It will have limited openings and 11 fewer piers than the existing bridge.

Construction of the replacement bridge

The trestle structures provide a stable base that is capable of holding more than 450t during drilling operations, which will anchor the piers of the new bridge into the bedrock. The drilled shaft work is expected to be completed by August 2016. Seven 250t cranes are being used for the construction.

The new bridge will open for traffic in September 2017, while construction works are expected to be completed by June 2018.

Hardesty & Hanover (H&H) and Figg Engineering Group were awarded a contract to provide design and low-maintenance solutions for the replacement bridge in November 2012.

Cianbro was awarded the general construction contract for the project in August 2012. G&G Steel was contracted to supply mechanical components for the lift span. The contract to supply concrete vehicular and railroad bridge segments was awarded to Unistress Corp.

Casco Bay Steel was selected to provide a steel centre span for the bridge while Ninive was contracted to supply 80 concrete segments measuring 28ft x 20ft.

Under the Transportation Investment Generating Economic Recovery (TIGER) grant, the US Department of Transportation (DOT) allotted $25m for the construction of the rail portion of the bridge in September 2014.