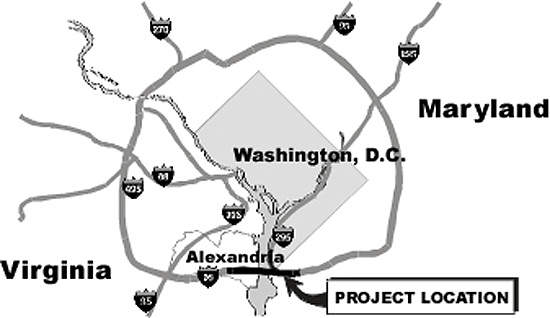 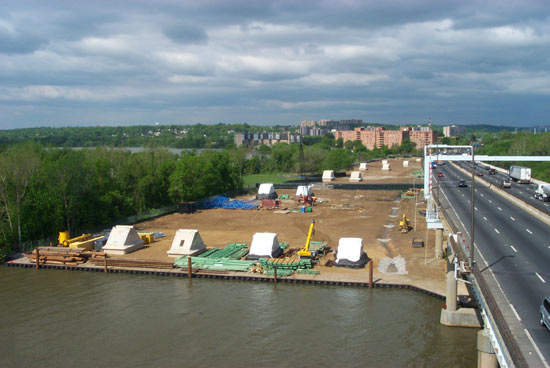 Lanes on the new bridge were doubled from six to 12 lanes. 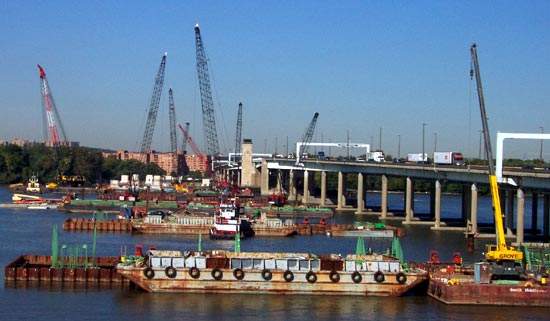 The first construction phase involved dredging the riverbed in preparation for building the foundations. 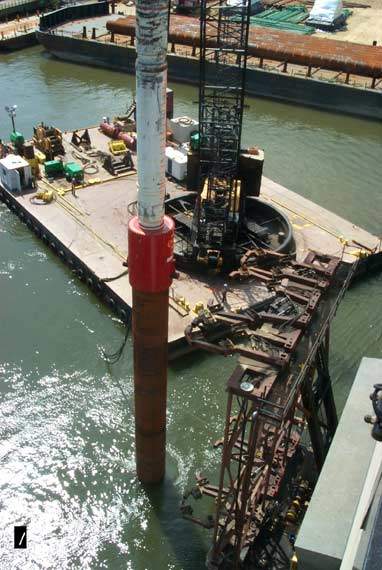 The bridge sits on steel piles bedded 150ft below the river.and is supported by 18 of the V-shaped piers. 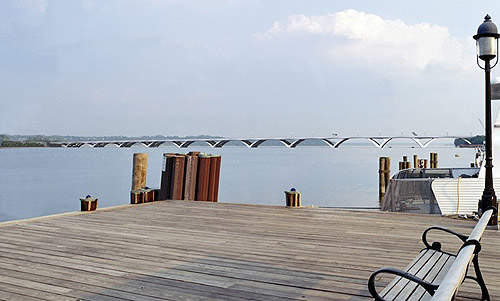 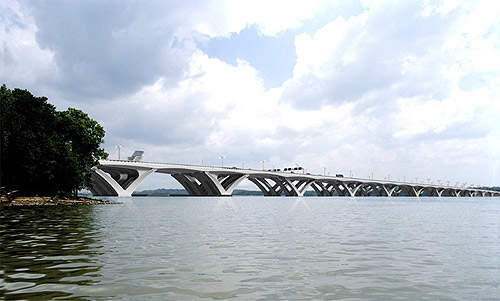 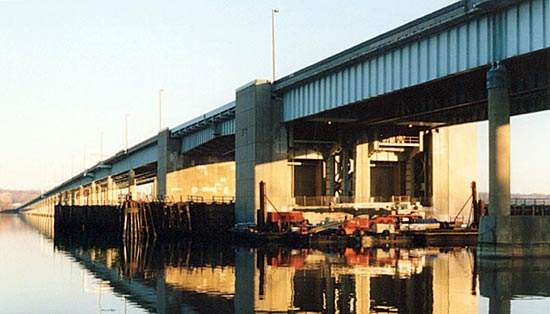 The old bridge showing some of the new foundation works. 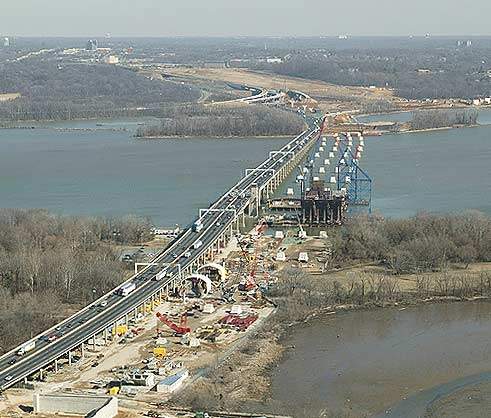 The original bridge was designed to carry up to 75,000 vehicles a day but at present almost 200,000 vehicles cross the bridge. 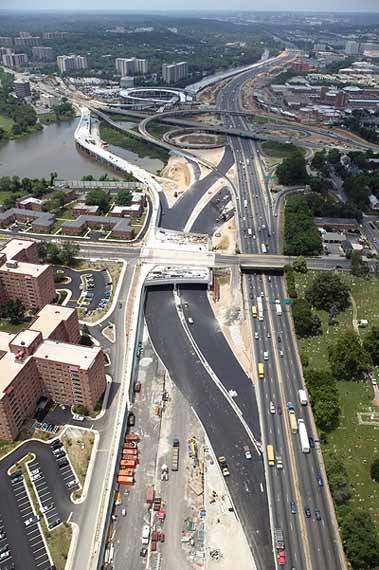 The new road intersections leading to the bridge. 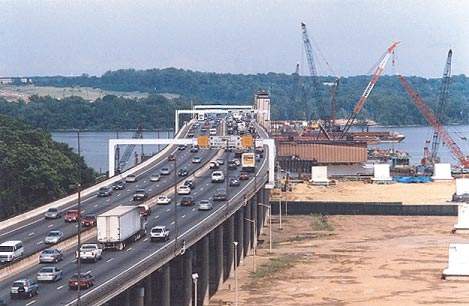 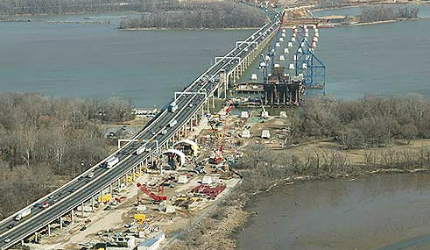 Woodrow Wilson Bridge, crossing the Potomac River in Washington DC, is replaced with two new bridges to cope with the increasing demands on it by commuter traffic.

This has been the cause of excessive and difficult maintenance work on the bridge, which led to a decision to replace it entirely. The project was completed in April 2013.

Funding for the Woodrow Wilson Bridge

“The original bridge was constructed in 1961 and was designed to carry up to 75,000 vehicles a day.”

The project area has a 7.5-mile corridor, beginning in Maryland and connecting, via the bridge, to Virginia.

The original bridge was constructed in 1961 and was designed to carry up to 75,000 vehicles a day. This design volume was reached in just eight years and, up until recently, almost 200,000 vehicles crossed the bridge on a daily basis.

This severe congestion was compounded by one of the worst bottlenecks in the US; the eight-lane Capital Beltway (I-95/I-495) narrows from eight-lanes into the six-lane bridge.

The demand for the new Woodrow Wilson Bridge was intensified due to the extensive growth of the Maryland and Virginia suburbs and the urban regeneration of Washington DC.

The Woodrow Wilson Bridge project had two main aims: for the bridge(s) to relieve the bottleneck, and the interchanges to alleviate traffic congestion and manage improved traffic flow.

In 1998, a bridge design competition was held. This was won by Steinman and Deleuw , which proposed a graceful, seamless bascule drawbridge.

The total design and construction costs of the bridge and ramps ran to $900m of the total budget and saw the bridge doubling its lanes, from six to 12.

The new drawbridge also has a 70ft navigational clearance reducing, the amount of yearly openings from approximately 260 to 65, greatly reducing traffic interruptions. The bridge sits on steel piles bedded 150ft below the river and is supported by 18 of the V-shaped piers.

The new bridge deck has a New Jersey Barrier median and New Jersey parapets resulting in the roadway being 44ft wide, therefore allowing a seven-foot shoulder on the right of each roadway, which the old bridge does not have.

The bridge construction programme was split into three main phases: dredging the riverbed; building the foundations; and constructing the actual bridge and approach roads (completed by 2009).

The first phase of dredging was necessary to create a channel for construction equipment to safely access the locations for the foundations to be built through a submerged aquatic mitigation bed (SAV). An estimated 330,600yd³ of river soil was dredged during the course of the first phase.

The contractor for the first phase was Weeks Marine (Contract BR1-Dredging, for around $14.5m). The dredging contract was completed in February 2001.

In August 2012, five new lanes on the Capital Beltway across the bridge between Telegraph Road and Maryland were opened to traffic. Each direction is provided with three LOCAL lanes and two THRU lanes replacing three original lanes, which existed in each direction.

The second phase involved the foundations being put in place so that they did not conflict with the existing bridge and bulkhead improvements in certain areas for the construction staging areas.

The foundations included steel pipe piles of 42in to 66in for the river piers (11 piers) and Pier V-2, the first pier on the Virginia shore. The other Virginia piers were constructed from square pre-stressed concrete piles (six piers).

Superstructure construction for the Maryland-based bridge

The final and the most contentious phase was the building of the bridge itself. This included the balance of the foundations, pre-stressed concrete V-piers, steel box girders, a control centre, a concrete deck, electrical controls, signs and lighting.

Following the completion of this stage (first bridge opened in May 2006), the old bridge was demolished and construction of the second span began using the foundations completed in 2003. The second span opened in 2008.

Only one bid for the superstructure construction was received. Kiewit, Tidewater and Clarke (the foundation contractors) bid $860m, a figure 70% more than the bridge authority’s estimate of $450 to $500m.

Consequently, the bid was rejected and the contract cancelled and split into three smaller contracts before being resubmitted for tender. This delayed the construction for six months. Three contracts were won for the bascule portions, one for the outer bridge’s over-water segment (Maryland Approach) and one for the outer bridge’s over-land section (Virginia Approach). The contracts for the Virginia Approach and Maryland Approach were awarded in April 2003 and June 2003 respectively.

The Bascule span contract was awarded to American Bridge Co / Edward Kraemer and Sons of Coraopolis PA for a bid of $186m. This was still 11% above the estimate of $168m, but was deemed to be within the acceptable range.

The contract included construction of the bascule sections of both of the six lane spans, as well as building of a bridge operating tower and demolition of the old six-lane bridge (Contract 3A).

The Virginia approach span was awarded to Virginia Approach Constructors, a joint venture of Granite Construction of Watsonville and Corman Construction of California, for a bid of $115.5m. This bid was less than the $160m estimate and had the effect of taking the bridge to 8% below the estimated budget at that time.

The contract involved the construction of seven of the bridge’s new 18 spans, with six on land in Alexandria’s Jones Point Park (Contract 3B).

The Maryland approach span was awarded to Potomac Constructors, a joint venture of the American Bridge and Edward Kraemer and Sons, for a bid of $191m. The contract involved construction of the bridge from the abutment in Maryland to the draw span just off the Alexandria shore. Crossing more than three quarters of the Potomac River, the contract involved building ten of the 18 spans, which are all across water (Contract 3C).

Contracts 3A to 3C, as per the deadline, were scheduled for completion by August 2008. However, construction was actually completed in November 2009.

An intelligent transportation system (ITS) worth $1.5m was installed to provide effective traffic information and quick incident response.

“The variable speed limit (VSL) system was found to reduce driver’s speeds by up to ten miles an hour when it is working.”

In July 2008, a new speed system was installed on the bridge to help slow drivers and keep a continuous flow of traffic moving along the bridge during the final stage of works.

The variable speed limit (VSL) system was found to reduce driver’s speeds by up to ten miles an hour when it is working.

The VSL relies on sensors and cameras to monitor traffic speeds for an operator, who can accelerate or reduce the speed limit to help keep traffic moving at a ‘constant’ speed. When the system is not on, drivers were found to be travelling at speeds between 65mph and 70mph, increasing the risk of accidents. When the system is on, these speeds are reduced to 55mph to 60mph.

West Coast Electric Highway (WCEH) is a network of electric vehicle (EV) charging stations being developed along the Interstate-5 (I-5) in the US.