X
Advertise with us
Praveen 3 November 2013

The Pan American Highway, which encompasses the entire US interstate highway system, is the world’s longest highway covering a length of approximately 48,000km.

Made up of interconnecting highways, it connects more than 20 countries in the Americas, except for a 100km gap halfway, located between Panama and Colombia, known as the Darién Gap.

The highway project was conceived in 1923 and stretches from Buenos Aries in South America to Edmonton in North America. The first portion of the highway was completed by Mexico in 1950.

Mexico solely built and financed the portions of the highway extending through the country, while the sections through the smaller Central American countries were constructed with assistance from the US.

Highway 1 in Australia is the world’s second longest highway and the longest national highway. It covers 14,500km, comprising of interconnected highways.

Highway 1 was inscribed as a national highway in 1955. It is comprised of both single and multilane roads. The route touches all the existing states in Australia, except Brisbane and Darwin, which are not directly connected. The highway shares the majority of its route with the Australian National Highway.

The 11,000km long Trans-Siberian Highway is the world’s third longest highway. It stretches from St. Petersburg to Vladivostok in Russia. The section of the route spanning the Asian Highway Network is called the AH6.

The highway comprises seven federal highways along the stretch, where it coincides with European route E30 and passes through Kazakhstan. The longest section of the entire highway is the Russian route M58 or the Amur Highway, a federal highway in Russia, stretching 2,100km from Chita to Khabarovsk.

The Trans-Canada Highway, with a current overall length of approximately 7,821km, is the fourth longest highway in the world and the second longest national highway. 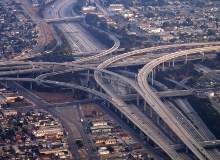 The highway’s construction commenced in 1950 and inauguration was held in 1962, although paving and other construction works continued until 1971. Total investment reached around $1bn.

The highway extends east-west from Victoria in British Columbia to St. John’s City in Newfoundland and Labrador. It passes through all ten Canadian provinces and links all major cities in the country.

The highway was constructed with an investment of Rs600bn ($9.2bn) and is maintained by the National Highways Authority of India (NHAI) under the Ministry of Road, Transport and Highways.

The highway features four to six lanes along the entire route. It was constructed in four sections, each awarded to different contractors.

The highway extends from Tongjiang City in eastern Heilongjiang Province to Sanya in Hainan Province. It is one of the five north-south highways and the seventh east-west highway in China.

It passes through provinces of Heilongjiang, Jilin, Liaoning, Shandong, Jiangsu, Shanghai, Zhejiang, Fujian and Guangdong. It has a missing link, caused by the Qiongzhou Strait at Hai’an in Guangdong, where cars are ferried across by trains to Haikou in Hainan, before ending in Sanya.

US Route 20, which stretches 5,415km in an east-west direction from Boston, Massachusetts, to Newport, Oregon, is the seventh longest highway in the world and the longest road in the US.

The highway was commissioned in 1926 and was extended in 1940. It crosses nine US states and is split into two by Wyoming’s Yellowstone National Park.

The original US Route 20 ended at the Yellowstone National Park prior to its extension in 1940. The highway’s western section intersects with US 101, while its eastern section runs parallel to the easternmost 138-mile (222km) stretch of Interstate 90 known as Massachusetts Turnpike.

The highway previously stretched from Bishop to Long Beach, California, and was considered as a transcontinental route until 1964.

It was also originally called Roosevelt Highway in the 1920s and 30s and then the Midland Trail Roadway before it was officially designated by the American Association of State Highway Officials (AASHO), who adopted the US numbering system for marking the Nation’s main Interstate highways.

Interstate 90 (I-90) runs from Boston, Massachusetts, to Seattle, Washington. The highway is 4,860.2km-long, ranking as the ninth longest highway in the world and the longest Interstate Highway in the US.

The highway runs parallel to the US Route 20 for the most part and passing through 13 states. The I-90’s construction commenced in the 1950s. The entire highway was completed in 1985 and incorporated existing roads for a major part of its route.

Interstate 80 (I-80), also known as Christopher Columbus Highway in certain parts along its route, is a 4,666km long highway making it the 10th longest highway in the world and second-longest interstate highway in the US.

The highway begins at an interchange with US Route 101 in San Francisco, California, and ends at New Jersey, where it stretches for 68km, called the Bergen-Passaic Expressway. It passes through 11 states in the US.

The longest continuous stretch of the I-80 is in Nebraska, extending approximately 116km between Exit 318 in the Grand Island area and mile marker 390 near Lincoln, Nebraska. It is also the longest stretch in the entire Interstate Highway System in the US.