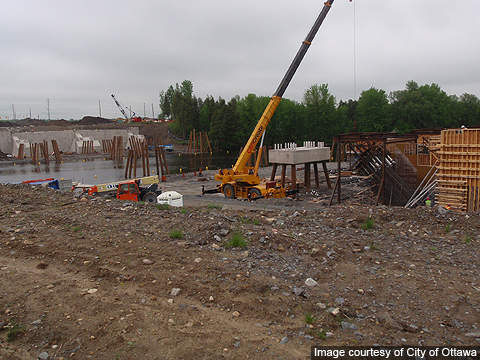 The construction site of the bridge. 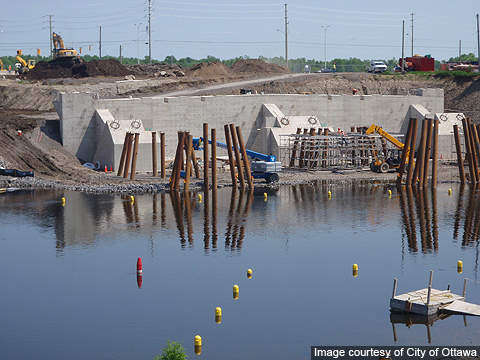 The on-site construction works began in 2011. 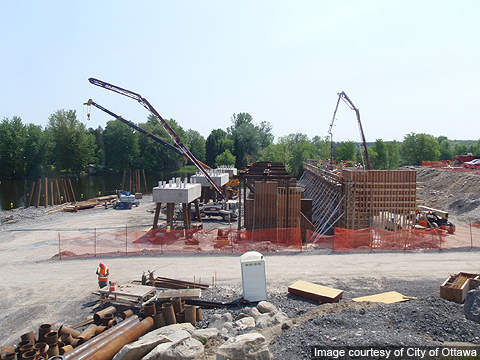 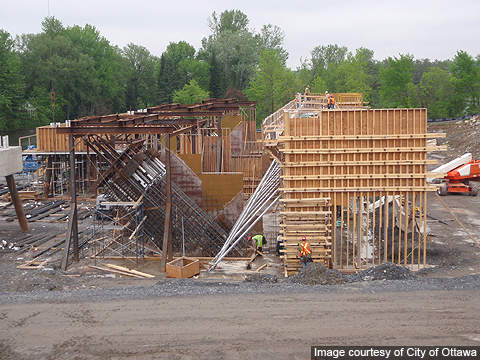 The steel fabrication work in progress.

The Strandherd-Armstrong Bridge links Earl Armstrong Road and Strandherd Drive in Ottawa, Canada. It was built to reduce the congestion and delays on Rideau River crossing, which arose due to the increase in population growth in the South Urban Community (SUC). The bridge also enhances sharing of resources and access to business between Riverside south and Barrhaven of the SUC.

The new bridge significantly relieves the traffic pressure on the existing bridges at Manotick and Hunt Club Road. The dedicated transit lanes provide better transit facilities and also reduce the travel time to the Ottawa International Airport. The project is sponsored and operated by the City of Ottawa.

The $50m bridge construction started in July 2010 and the completed bridge was opened to traffic in July 2014.

The project was identified as a critical continuous east-west arterial road by both South Nepean Secondary and the Riverside South Community.

The bridge includes four lanes for cars and trucks, two for buses, two for bikes and cycles, two lanes dedicated for turning and two for sidewalks. Landscapes on the east and west riverbanks were restored as part of the project for promoting wildlife habitat, minimising light pollution and managing the storm water in the post-construction period of bridge.

“The total investment for the construction of Strandherd-Armstrong bridge was $50m.”

Design of the river crossing

In 2007, the Rideau Canal was identified by UNESCO as a world heritage site. The preliminary design of the bridge was prepared in compliance with the policy made to protect the heritage of the designated site in February 2009. The design was approved by the National Capital Commission and Parks Canada.

The bridge is 143m-long and 50m-wide. The main arch of the bridge is 31m-high, supported by structured cables. The bridge is in above deck arch structure form. The sidewalks are 3m-wide. Pedestrian-scale lighting is provided along the bridge.

The design focused on incorporating heritage features and improving the road conditions for pedestrians and cyclists. It also focused on providing 100-year design life to the structure, high-quality durable materials, minimising the effect on the habitat during the construction and offering cost-effective and safe bridge.

The total investment for the construction of Strandherd-Armstrong bridge was $50m. The project was financed by the federal and provincial governments of Canada, which had announced their commitments to fund the project in June 2011. They provided funding for the project under Building Canada Fund.

The federal government contributed $16m, which is roughly one-third of the project cost. Ottawa’s funding was approved in 2010.