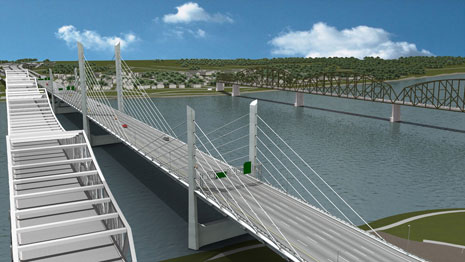 The US states of Indiana and Kentucky have signed an agreement to finance two bridges across the Ohio River for a cost of around $1.1bn, $1.5bn less than the original estimate.

The agreement also outlines each state’s terms and responsibilities for financing and project completion which will be funded through a combination of traditional funding and tolls.

Work on the Ohio River Bridges Project involves construction of two new bridge spans and the reconfiguration of the Kennedy Bridge interchange, known as Spaghetti Junction, located in downtown Louisville.

Indiana Governor Mitch Daniels said: "Decades of waiting for greater convenience and quality of life in the metro area will soon be over, but that’s only part of what’s ahead. Southern Indiana has tremendous economic prospects and these new bridges are the key to making them real."

Under the agreement, Indiana will be responsible for construction of the East End Bridge between Utica and Prospect, which will link the Lee Hamilton Expressway in Indiana and the Gene Snyder Freeway in Kentucky.

Kentucky will be responsible for construction of the new I-65 bridge in Louisville, reconfiguration of the nearby Kennedy Bridge and modernising downtown interchanges. Construction of the bridges is slated to start by the end of 2012, and they are expected to become operational over the next six years.

Kentucky Governor Steve Beshear said: "Through cooperation and determination, we will achieve what this region has talked about – but been unable to deliver – for four decades."

Kentucky has promised to provide $536m in traditional funding for the downtown portion, while Indiana has pledged $432m in traditional funding for the East End portion. Indiana will issue its tender to finalise a contractor for the East End crossing. Final awarding of the contract is expected by the year’s end, while Kentucky will seek contractors to submit their qualifications by 2 April with contract awarding expected by 16 April.

Image caption: The new Downtown Bridge will have a series of twin towers with cable support across Ohio River. Photo: Louisville and Southern Indiana Bridges Authority.