The Akashi-Kaikyo Bridge, spanning the Akashi Strait, connects the city of Kobe and Awaji Island in Hyogo Prefecture. It is the world’s longest suspension bridge, with its central span measuring 1,991m. Its made up of six lanes with a combined length of 3,911m.

The suspension bridge was constructed as part of the larger Honshu-Shikoku Bridge project which connects Honshu with Shikoku by both highway and rail. The bridge construction took 10 years to complete from 1988 to 1998.

The stiffened truss suspension bridge consists of three spans and facilitates the movement of 23,000 cars on a daily basis. It is designed to withstand up to 286km/h wind speeds and 8.5 magnitude earth quakes. The two towers of the bridge reach 298m above sea level.

The Xihoumen Bridge, built over the Xihoumen Waterway, connects Cezi Island with Jintang Island. It is the world’s second longest suspension bridge with a main span of 1,650m. It comprises of four expressway lanes measuring 5,300m in total.

The suspension bridge was constructed by Zhejiang Government from 2004 to 2009 at a cost of ¥2.48bn ($270m approximately). It is one of the five bridges built as part of the Zhoushan Mainland and Islands Link Project launched by Sichuan Road and Bridge Company in 1999. China Communications Construction Company provided the bridge design.

The bridge is designed for a 100-year lifespan and is built to withstand up to 148km/h wind speeds. It consists of twin box girders made of an orthotropic steel structure that used 11,000t of galvanised steel wire.

Great Belt Bridge, also known as the East Bridge, connecting Halsskov and Sprogø is the third longest suspension bridge in the world and the longest outside Asia. The suspension bridge spans the Eastern Channel, which is an international waterway. The bridge has a main span of 1,624m, and total length of 6,790m.

The bridge was opened to traffic in 1998 after nearly ten years of construction. It was built as part of the Storebælt road project. Dissing+Weitling architecture in collaboration with COWI provided the bridge design and A/S Storebælt maintains the bridge.

Two parallel cables, each measuring 3km-long and 83cm in diameter, carry the road. Corrosion-proof steel wires hold the cables together. The caissons for the 254m-high pylons of the bridge weigh 32,000t each. They are placed on stone cushions to provide a stable base.

Yi Sun-sin Bridge, which links Kwangyang and Yeosu city, is the fourth longest suspension bridge in the world. It is named after Admiral Yi Sun-sin, a Korean naval commander. The bridge has a 1,545m main span and two end spans measuring 357.5m each. The overall length of the bridge is 2,260m. 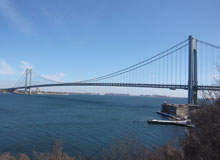 The ten longest suspension bridges in the US

The four-lane bridge was constructed as part of an approach road to Yeosu Industrial Complex. The construction works started in late 2007 and the bridge was opened to traffic in February 2013. Daelim took care of the entire construction, while Yooshin Corporation provided the design. Approximately KRW434bn ($400m) was invested on the bridge construction.

The bridge consists of twin box girders built from 24,000t of steel. The 272.7m-high pylons were built using slip-form method and the main cables, 700mm in diameter consisting of 12,800 wires, were installed using air-spinning method.

Runyang Bridge, built across the Yangtze River, connecting the cities of Yangzhou and Zhenjiang is the fifth longest suspension bridge in the world. The central span of the bridge is 1,490m and the total length is 35,660m.

The bridge forms part of the Beijing-Shanghai Expressway. Construction works for the bridge commenced in 2000 and opening was held in 2005. China Road and Bridge Corporation (CRBC) and Dorman Long Technology acted as the main contractors. The construction cost amounted to CNY5.8bn ($700m).

The main span was divided into 47 deck units for the purpose of construction. Each deck measuring 470t was fabricated offsite and moved to the site by barges. Installation was done using specially designed gantries. The bridge towers are 215m tall and the main cables weigh 21,000t each.

Nanjing 4th Yangtze River Bridge, which forms a major component of China’s national expressway network and Nanjing Bypass Expressway, is the sixth longest suspension bridge in the world. The main span of the bridge is 1,418m-long, while the end spans are 409m and 364m-long.

The preliminary design works for the bridge commenced in 2003, construction commenced in late 2008, and the bridge was opened to traffic in December 2012. The construction was carried out by 4th Nanjing Bridge Construction Headquarters (4NBCH), with Zhongjiao Highway Planning & Design Institute acting as the consultant.

The bridge deck consists of 38.2m wide steel box girders fabricated using 35,000t of steel. It has six traffic lanes in total, three in each direction. The two main cables of the suspension bridge are made up of prefabricated parallel wire strand ropes. The cable diameter is 783mm at the main span.

Humber Bridge, spanning the Humber Estuary near Kingston upon Hull in the UK, is the seventh longest suspension bridge in the world. The central span of the bridge is 1,410m long, while the total length is 2,220m. The Humber Bridge Board maintains the bridge.

The suspension bridge comprises two dual carriageways as well as footpaths and cycleways. The approval for the bridge construction was granted in 1959, construction activities started 20 years later in 1979, and the bridge was officially commissioned in 1981. The consulting engineers for the project were Freeman Fox & Partners.

Jiangyin Bridge, constructed at the lower reaches of Yangtze River, is the world’s eighth longest suspension bridge with a central span of 1,385m. The bridge connects the cities of Jiangyin and Jingjiang in Jiangsu Province. It serves traffic from the G2 Beijing-Shanghai Expressway and also connects the Nanjing-Nantong Expressway.

The dual three-lane bridge was designed by Jiangsu Provincial Communications Department and was constructed by Cleveland Bridge & Engineering Company. The construction commenced in 1994 and was completed in 1999. It was funded by the UK Government through the Department for International Development (DFID).

The bridge consists of a steel box girder deck erected in pre-assembled units by gantries. The deck is supported by cables made of preformed parallel wire strands. The bridge pylons are 193m-high. A shipping clearance of 50m is provided to allow the passage of cargo vessels.

Tsingma Bridge, constructed across the Ma Wan Channel, with a main span of 1,377m is the ninth longest suspension bridge in the world. The bridge is comprised of two decks featuring both motorway and railway. The upper deck features the motorway comprising of six lanes (three lanes per direction), while the lower deck carries two rail tracks and two sheltered carriageways.

The bridge construction was carried out from 1992 to 1997. It was overseen by a joint venture comprising of Trafalgar House, Costain Civil Engineering, and Mitsui. Mott MacDonald provided the bridge design.

The overall length of the bridge is 2.17km. The fully suspended main span is supported by two towers. The steel box deck is suspended from two main suspension cables that are 1.1m in diameter. A shipping clearance of 62m is provided.

The Hardangar Bridge in Norway, with a main span of 1,310m and overall length of 1,380m, is the tenth longest suspension bridge in the world. The bridge spans across the Hardanger Fjord linking the cities of Oslo and Bergen. It was constructed to replace the traffic on highway 7/13 between Bruravik and Brimnes. The construction commenced in 2009 and commissioning took place in August 2013.

The suspension bridge features two traffic lanes, and a combined cycle lane and footpath. It was designed by Forum Arkitekter, a Norwegian company. Statens Vegvesen provided engineering services for the project. MT Højgaard performed the steel and assembly work, while Veidekke carried out the concrete work.

The bridge span is supported by two twin pylons 202.5m-high. Three crossbeams connect each of the twin towers. The two suspension cables, from which the deck is suspended, were fabricated using 6,400t of steel. Each cable is 600mm in diameter and comprised 10,000 wires.

The majority of the world’s 10 longest highways are located in the US, including the world’s longest – the Pan American Highway – which spans a whopping 48,000km.

The 10 longest suspension bridges in the US

Suspension bridges exemplify engineering innovation and the US has witnessed drastic developments in this area since the award of the first patent to build a bridge suspended on iron rods in 1808.