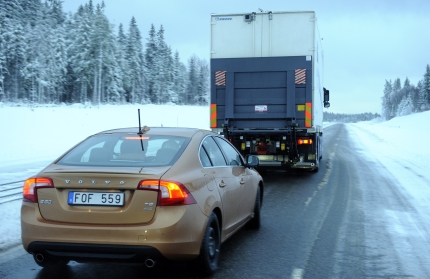 Road trains of up to eight separate vehicles – including cars, buses and trucks – autonomously follow a manually driven lead vehicle, operated by a professional driver.

More than 80% of non-commercial journeys in Europe are taken by car, bringing both congestion and road traffic related CO2 emissions to alarming levels.

In the EU, 44% of goods are transported by road, compared to 39% by short-sea shipping routes, 10% by rail and 3% by inland waterways. When it comes to passenger transport, the statistics are even more compelling, as 81% of non-commercial journeys are undertaken by road, in comparison to only 6% by rail and 8% by air.

"Early estimates suggest that fuel consumption could be cut by 20% among cars and trucks in a ‘platoon’ or ‘road train’."

As mobility continues to grow, the strain on the road traffic system is becoming more and more severe, resulting in congestion, increased fuel consumption and rapidly rising levels of greenhouse gases. Indeed, the transport sector, principally road vehicles, is now responsible for 28% of EU emissions of CO2.

Although the transport industry generates 10% of EU wealth in terms of gross domestic product (GDP) and provides more than ten million jobs, it is clear changes need to be made to ensure European transport policies are operating in a sustainable way.

Enter Safe Road Trains for the Environment (SARTRE), an EU-financed research project, which is looking at inexpensive ways of getting vehicles to travel in a ‘platoon’ on Europe’s motorways.

Led by Ricardo UK Ltd in collaboration with Applus IDIADA, Robotiker-Tecnalia in Spain, the Institut für Kraftfahrwesen Aachen (IKA) in Germany, the SP Technical Research Institute of Sweden, the Volvo Car Corporation and Volvo Technology, the project hopes to cut fuel consumption, journey times and congestion, as well as improving safety, by linking vehicles together.

Early estimates suggest that fuel consumption could be cut by 20% among cars and trucks in a ‘platoon’ or ‘road train’.

"As well as reducing congestion by making utilisation of the roads more effective, when drivers do happen to be in congestion, it will be less of an issue because they will be able to use that time more effectively," said Tom Robinson, project coordinator at Ricardo UK, Ltd.

So how does SARTRE’s concept of road trains actually work? Essentially, the project participants are working on creating road trains of up to eight separate vehicles – including cars, buses and trucks – where vehicles autonomously follow a manually driven lead vehicle, operated by a professional driver.

"Bergenhem is concerned that drivers, as well as legislators, could remain suspicious of the idea of ‘cars that drive themselves’."

The SARTRE project started in September 2009 and aims to reach completion by the end of 2012, by which point the project’s researchers hope to have a prototype that will facilitate the safe adoption of road trains on un-modified public highways with full interaction with non-platoon vehicles.

SARTRE is not looking to implement any changes to current transport infrastructure, rather it will use wireless technology to facilitate communication between the lead and following vehicles. "Each vehicle in the platoon is equipped with a human-machine interface (HMI), in which the platoon’s Organisation Assistant (OA) software is running," Carl Bergenhem, a researcher in the electronics department at the SP Technical Research Institute of Sweden, explained.

"With this interface, each driver will receive sufficient information about the status of the platoon, the destination, instructions for joining and so on. Similarly, the lead vehicle driver is given an overview of the participants in the platoon."

The precise communication system that will be used is still under development, but progress is certainly being made. "We’re now at the point where we’re refining the autonomous control algorithms to allow three cars and a truck to operate in the platoon," Robinson said.

"We’re also evolving the platoon strategies and our understanding of how to do join manoeuvres and leave manoeuvres."

The next step for SARTRE will be moving from test track trials, one of which has already been successfully carried out at the Volvo Proving Ground near Gothenburg in January 2011, to full-blown public road trials.

"We’re aiming to move the platoon to Spain for further testing in summer of 2012 and part of that will hopefully involve a demonstration on a public highway," Robinson added.

Bumps along the road for the self-driving car SARTRE project

However, there is still a substantial way to go before the system can be fully commercialised. For Robinson, the biggest challenge is unquestionably gaining an understanding of what European legislators will allow the SARTRE project to accomplish in the future.

"We recognise that technology-wise, it’s probably possible to get something onto highways in eight to ten years," he acknowledged.

"The question is whether we’re able to overcome the legislative issues that might be present in a similar timeframe. It isn’t just EU legislation we have to consider; we also have to take into account the different national regulations that might prevent things from happening. For this reason, I’d tend to put a 20-30 year time frame on it."

Bergenhem agreed. "National laws and the Vienna Convention on Road Traffic currently imply the driver shall always have final control over the vehicle," he said.

This is clearly an issue of critical importance to the SARTRE project. Although the lead driver of any platoon would be obliged to have additional training because of the extra responsibility they would be taking on, there’s no way of predicting whether the 27 EU member states would be willing to integrate this concept into their road safety legislation.

Moreover, the matter of the lead driver’s legal liability presents issues when it comes to the ‘road trains’ business case.

"We’re expecting that in order to make it a viable commercial proposition, the lead vehicle driver who has that additional responsibility will also have some kind of commercial benefit," Robinson said.

Despite the challenges still to be faced in evolving the SARTRE prototype into a fully commercialised operation, Robinson is keen to point out that it’s more than likely that earlier iterations of ‘road trains’ will be implemented in the interim. "We might see an earlier version of platooning getting rolled out onto public highways that doesn’t require the legislative changes necessary for our project," he predicted.

"You could see cooperative vehicles that still require a driver to control the steering, for instance, but where the vehicle’s speed was being controlled by a platoon-type system."

Bergenhem is also concerned that drivers, as well as legislators, could remain suspicious of the idea of ‘cars that drive themselves’.

While the project has certainly garnered much positive media attention, he feels that any change to public perceptions of private transport could be seen as a threat to their personal integrity.

Yet, it’s a psychological leap he feels must be taken if Europe is to tackle the issues of congestion, pollution and driver safety that are increasingly affecting its transport network, and move towards the sustainable system that is so desperately required.