Quebec Bridge is the world’s longest cantilever road bridge, with a main span length of 549m. The bridge crosses the lower Saint Lawrence River, linking Quebec City and Lévis, Quebec. The bridge has an overall length of 987m, was completed in 1917 and opened to traffic in 1919.

The bridge cost $25m to build and has been owned by the Canadian National Railway since 1993. The 67ft-wide cantilever bridge currently carries three highway lanes, one rail line, and a pedestrian walkway. The bridge structure is supported by two main pillars laid on the river bed. The bridge collapsed twice during the construction phase, in 1907 and 1916, costing 88 lives.

Minato Bridge located at Osaka Port is a double-deck cantilever truss bridge, which carries the Hanshin Expressway Route 16 Osakako Line on its upper deck and Route 5 Bayshore Line on the lower deck. The bridge, with main span of 510m, is the world’s second longest cantilever road bridge.

Minato Bridge opened in 1974, has a width of 22.5m, and carries four lanes on each deck. It comprises two 235m side-spans and has an overall length of 980m. It was constructed using 70mm² and 80mm² of high strength steel. The centre part of the truss was erected using a large block weighing 4,572t.

The longest cantilever bridge in Japan, the Minato bridge is owned by Hanshin Expressway Public Corporation. Mitsubishi Heavy Industries (MHI) was involved in the construction of the bridge. IHI Infrastructure Group provided seismic reinforcement for the bridge following the Great Hanshin-Awaji earthquake in 1995.

Commodore Barry Bridge is a cantilever bridge that spans the Delaware River, connecting Chester, Pennsylvania with Bridgeport, New Jersey. It is the third longest cantilever road bridge in the world, with a main span of 501.09m. The overall length of the bridge, including approaches is 4,240.4m.

The bridge opened to traffic in February 1974, replacing a ferry crossing between the two states. The 24m wide bridge carries five concrete lanes of US Route 322 and County Route 536 (CR 536), and features two pedestrian paths. It has a mid-span clearance of approximately 59m and each of the two side spans are 250.55m-long. The construction of the bridge utilised approximately 44,452t of steel.

The longest cantilever bridge in the United States, Commodore Barry is maintained by Delaware River Port Authority (DRPA) of Pennsylvania and New Jersey. The bridge was constructed with an estimated investment of $115m. 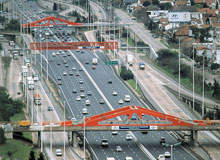 The twin bridges have an overall length of 920m each. The fist bridge was opened in April 1958 and the second bridge opened in November 1988. The second bridge is designed to carry four lanes of traffic, as well as two high-occupancy vehicle (HOV) reversible lanes, while the first bridge carries four lanes. Each of the two bridges has four piers, with one pier each laid on the river bed.

The bridges were constructed and are maintained by the Crescent City Connection Division (CCCD) (formerly Mississippi River Bridge Authority). The design for both bridges was provided by Modjeski & Masters. The bridges’ annual traffic volume exceeds 63 million.

Howrah Bridge spanning the Hooghly River connects the twin cities of Howrah and Calcutta in West Bengal. It is the fifth longest cantilever road bridge in the world with a main span length of 457.20m. The bridge was opened to traffic in February 1943 and has an overall length of 705m.

The 30m wide bridge carries eight lanes of Strand Road and features two pedestrian paths. The main towers of the bridge are 85.34m-high and 23.16m apart at the top. The cantilever bridge was constructed utilising a combination of high tensile and mild steel.

The bridge is operated by Kolkata Port Trust (KPT). Rendel, Palmer and Tritton designed the bridge, while the construction was carried out by Cleveland Bridge and Engineering Company under the supervision of the Howrah Bridge Commissioners. Tata Iron and Steel Company (TISCO) supplied 80,000t of steel for the bridge.

The Gramercy Bridge (officially the Veterans Memorial Bridge), spans the Mississippi River, connecting Gramercy with Wallace, Louisiana. It is the sixth longest cantilever road bridge in the world with a main span of 445.01m. The overall length of the bridge is 918m.

The construction of the bridge was completed in 1985 with a $109.6m investment. It is one of the many bridges constructed on the Mississipi River following a ferry accident in 1976, which killed 78 people. The bridge carries four lanes of Louisiana State Highway 3213. The construction utilised 18,900t of steel. The clearance below the bridge deck is 50m.

The cantilever bridge is owned by Louisiana Department of Transportation and Development (LaDOTD). The contractors involved in the construction of the bridge included T.L. James, Traylor Brothers, SLC Division of Sorrento Lumber Company, and Williams Brothers. The bridge was designed by E. Lionel Pavlo Engineering Company. IHI Infrastructure Group was also involved in the project.

The bridge serves approximately 110,000 vehicles a day, comprising mainly truck traffic. The bridge construction started in 1963 and was opened to traffic in 1968. The clearance below the bridge deck is 53m and the bridge width is 24.384m.

Louisiana Department of Transportation and Development (LaDOTD) maintains the bridge. The total investment on the construction of the bridge was $41m. TRC completed the rehabilitation works for the bridge in 2013.

Tappan Zee Bridge crossing the Hudson River, about 21km north of New York City, carries the New York State Thruway, and connects Rockland and Westchester Counties. It is the eighth longest cantilever road bridge in the world, with a main cantilever span of 369m. The overall length of the bridge including its approaches is 4,881m.

The bridge opened to traffic in 1955 and carries seven lanes of Interstate 87 and Interstate 287 of NY Thruway. It is designed to carry 100,000 vehicles a day and has already exceeded the capacity, which currently peaks at 170,000 vehicles a day. It will be replaced by the New NY cable-stayed twin span bridge in 2018. The two main towers of the Tappan Zee bridge are supported by two large caissons each weighing 16,000t.

The bridge is maintained by New York State Thruway Authority. A deck replacement project for the bridge was in the final phase as of September 2013. The project will replace 96% of the original deck. The construction works are being carried out by Tutor Perini Corporation with an investment of $148.8m.

Lewis and Clark Bridge, also known as Longview Bridge, spanning the Columbia River and connecting Longview, Washington, with Rainier, Oregon, is the ninth longest cantilever road bridge in the world with a main span of 365.76m.

The bridge opened in 1930 and carries State Route 433 and feature pedestrian pathways. The bridge was constructed with an investment of $5.8m and is maintained by Washington State DOT.

The bridge was designed by Joseph B Strauss of Strauss Engineering Corporation, and constructed by Longview-Columbia River Bridge Company, with Bethlehem Steel Company acting as the main contractor. Pacific Bridge Company of Portland built the substructure, and Lindstrom and Feigensen constructed the timber approaches and concrete floor deck. Wallace Bridge and Structural Steel Company fabricated the steel components along with the main contractor, while JH Pomeroy and Company erected the steel superstructure.

The cantilever bridge opened to traffic in June 1909. It carries ten lanes of New York State Route 25 (NY 25), featuring four lanes on the upper deck and six lanes on the lower deck. The bridge also features bicycle ways and pedestrian paths. The overall length of the five-span cantilever truss bridge, including its approaches, is 2,270.5m. The construction of the bridge utilised 75,000t of steel.

The bridge was designed by Gustav Lindenthal and the architect was Henry Hornbostel. Other engineers involved in the project included Richard S Buck and Othniel Foster Nichols. The bridge was constructed with an investment of $18m.