2 and 1 for motorcycles (each direction) 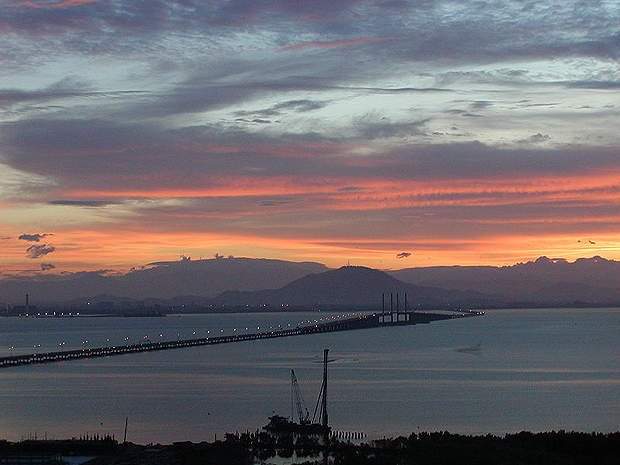 Penang Second Bridge is a cable-stayed bridge built across the South Channel of Penang, Malaysia. The 24km bridge, linking Batu Maung on Penang Island with Batu Kawan on the mainland, was opened on 4 March 2014. It is one of the longest bridges in Malaysia and South East Asia.

Penang Second Bridge is the second bridge structure linking the island to the mainland after the first Penang Bridge, which was constructed in 1985. The new bridge reduces traffic on the first Penang bridge by 20% and transforms Penang into a key logistics and transportation hub.

The Malaysian government unveiled plans for the construction of the Second Penang Bridge in August 2006. Built under a co-operative programme between China and Malaysia, it was the biggest civil work carried out in Malaysia in the past 20 years.

The project was implemented as part of the 9th Malaysia Plan. Following the groundbreaking ceremony on 12 November 2006, China Harbour Engineering Co (CHEC) and UEM Construction carried out soil studies and test piling works. Construction commenced in November 2008 and was completed in 2014.

“Penang Second Bridge is the largest civil work carried out in Malaysia in the past 20 years.”

Similar to the first Penang bridge, the Penang Second Bridge has a cable-stayed, mid-span of 240m and a clearance height of 30m above sea level.

A dual-pylon, cable-stayed structure consisting of three spans was adopted for the main navigation spans. The high clearance allows large ships to pass under the bridge.

The bridge has a dual carriageway with two lanes and a motorcycle lane on either side. The approach spans have a width of 29.8m and main navigation spans are 35.6m wide.

The overall length of the bridge is 24km, of which sections covering 17km are built on the channel.

Penang Second Bridge has a new Batu Kawan interchange to link the Northern Route on the North-South Expressway.

A new toll plaza has been constructed at the approach of interchange. A second new interchange in Batu Kawan has also been built for pedestrians to access the bridge from Batu Kawan. The proposed speed limit on the bridge is 80kmph.

Approximately 24% of the bridge construction involving substructures and foundations was completed in April 2010. CHEC used pre-fabricated box beam technology for the beam construction.

Innovative ‘short-line matching’ technology allows the production of short sections of beams measuring 3m-4m for the bridge. Since the bridge location is surrounded by shallow waters, small beams were easily transported to the site by smaller vessels.

The box-beam technology also enables the bridge to withstand earthquakes measuring 7 on the Richter scale.

A temporary jetty in Batu Maung was constructed by CHEC to provide logistics support for construction materials, plant and machinery and workforce. Approximately 1,000 engineers, technical staff and workers were employed in the project.

The second Penang Bridge was constructed by CHEC, a subsidiary of the China Construction & Communications Group (CCCG) in co-operation with UEM Construction.

UEM is a wholly owned subsidiary of Khazanah National, which is an investment arm of the federal government.

The Malaysian government signed a contract with UEM Group for the construction and management of Penang Second Crossing Bridge in November 2006. Jambatan Kedua supervised the construction, management and operations of the bridge.

AECOM was selected to provide design, engineering and construction supervision for the project.

The total cost of the Second Penang Bridge was RM4.5bn ($1.37bn). The project is largely funded by the People’s Republic of China through the Export-Import Bank of China.

Malaysia and China signed a RM2.7bn ($800m) loan agreement in July 2007 for the bridge construction.

The loan is repaid over 20 years with an interest rate of 3% per annum. The remaining cost of the project is funded by the Malaysian government.