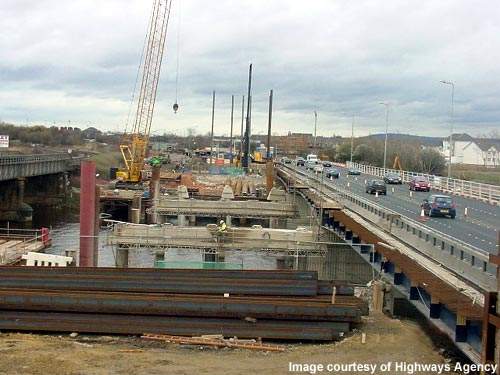 The Surtees Bridge in March 2007 with the new half open carrying two temporary lanes each way. 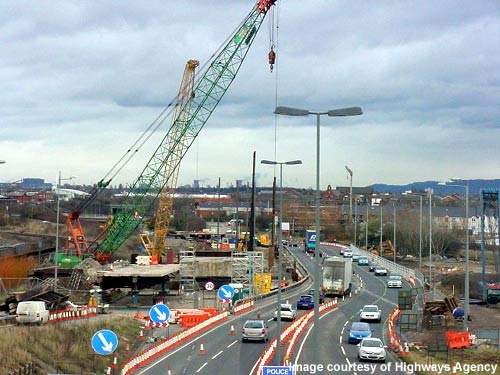 The 1,200t crane from Sarens ready for action. 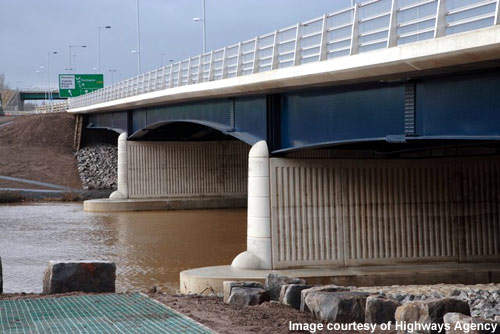 The inauguration of the new Surtees Bridge. 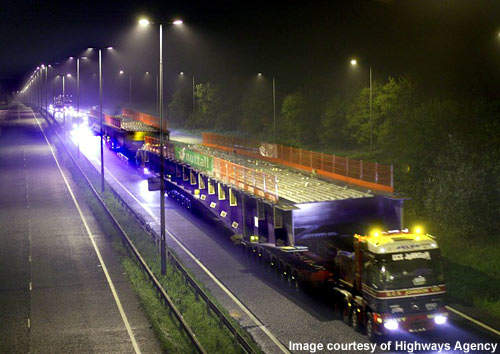 Sections of the new Surtees bridge were transported at night. 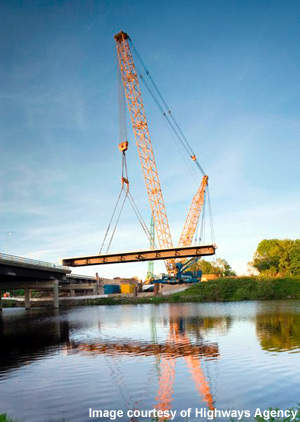 Bridge section being lifted into place.

The A66 is an important route in the north east of England connecting Stockton and Middlesbrough. In 2004 the Highways Agency (owners of the bridge) along with Stockton on Tees borough council decided that the old bridge needed to be replaced at a cost of £17.3m (€24m). The reasons for this were fourfold:

The bridge replacement project contract was awarded to Edmund Nuttalls (also Colas) in February 2006. A1 Integrated Highway Services is a joint venture of Nuttalls and Colas. The project required that the A66 be kept moving through this route over the one-year period of the project and consequently there were four phases.

“The project required that the A66 be kept moving through this route.”

In phase one utilities and services were moved away from the old bridge supports and abutments, including sewers, gas main and telephone and electricity lines. Phase two was the start of the major work and began in March 2006. The southern half of the old bridge was taken down and part of the new bridge erected to replace it.

Phase three saw the traffic switch to the newly constructed southern half of the bridge and the north section of the old bridge demolished. Phase four was the construction of the remaining half of the new bridge. The bridge was opened to traffic in December 2007 and officially opened in January 2008.

Part of the problem with the old bridge was that the geology in this area of the river crossing showed particularly soft ground, hence the movement. For the new bridge four types of piling and river scour protection were used. The work for the new bridge supports was carried out from temporary platforms, the foundations of which were prepared by BAM Equipment of Holland.

These temporary steel jetties were ‘piled’ either side of the river with piles 1.07m in diameter and 30m deep. These jetties were then used to support the 133t Hitachi piling rigs with a 47m-high mast. Medium cranes were used to work on replacement foundations (44 bored steel cased piles 30m down to Bunter sandstone bedrock) and also the replacement super structure for one third of the way each side.

The middle sections were placed by a special 1,200t crane from Sarens. Additional foundation piling was carried out by Aarslef, including steel H piles for the abutments on each side and 130 x 300mm² reinforced concrete piles for the embankment on one side of the bridge to protect against settlement in the future. The new bridge has also improved ship collision protection.

The old five-span bridge was replaced with the new three-span bridge. The 145m new bridge has nine parallel steel girders and Omnia planks across as the formwork for the concrete deck on top. There were four girders in the first phase which were provided as two matching pairs from Cleveland Bridge UK Ltd (each of the 163.2t beams was just over a span length [57m] and transported by GCS Johnson). This was repeated on the other side of the bridge.

The 20km transport of these 7.6m-wide bridge sections was carried out at night because signs and lampposts had to be dismantled to allow them through the towns; the trailers were 70m in length. The final middle section, in six 163.2t sections, was dropped in to complete the bridge.

HR Wallingford, a consultant to the project, also suggested protection for the foundations of two railway bridges further upstream because of a change in the flow of the river caused by the new bridge. To accomplish this, Geofabric was laid on the riverbed (weighed down with rocks) and an excavator placed an 800mm-thick riprap layer. The new wider Surtees Bridge has three lanes in each direction along with a combined pedestrian and cycle path. The three lanes allow the new slip roads from the south Stockton link road to be incorporated.

Replacing the old bridge required careful planning to keep the traffic running, one half at a time. One of the greatest aids in getting the project completed on time was the use of a 1,200t Gottwald AK 680-3 crane hired from Sarens UK of Middlesborough which was used on four separate occasions.

The first time was to lift out a 344t section of the old bridge but the crane was also used to lift the final sections of the bridge into place. The crane, which is the second largest available in the UK, is 80m high, with a jib extendable from 65 to 72m (600t of counterweights).

The AK680-3 was delivered in 45 lorries and required three days to set up, as work had to be carried out from both sides of the river. Other crane work on the site was carried out by a Sumitomo SC1500 and a Liebherr LR1160 (both crawler cranes).